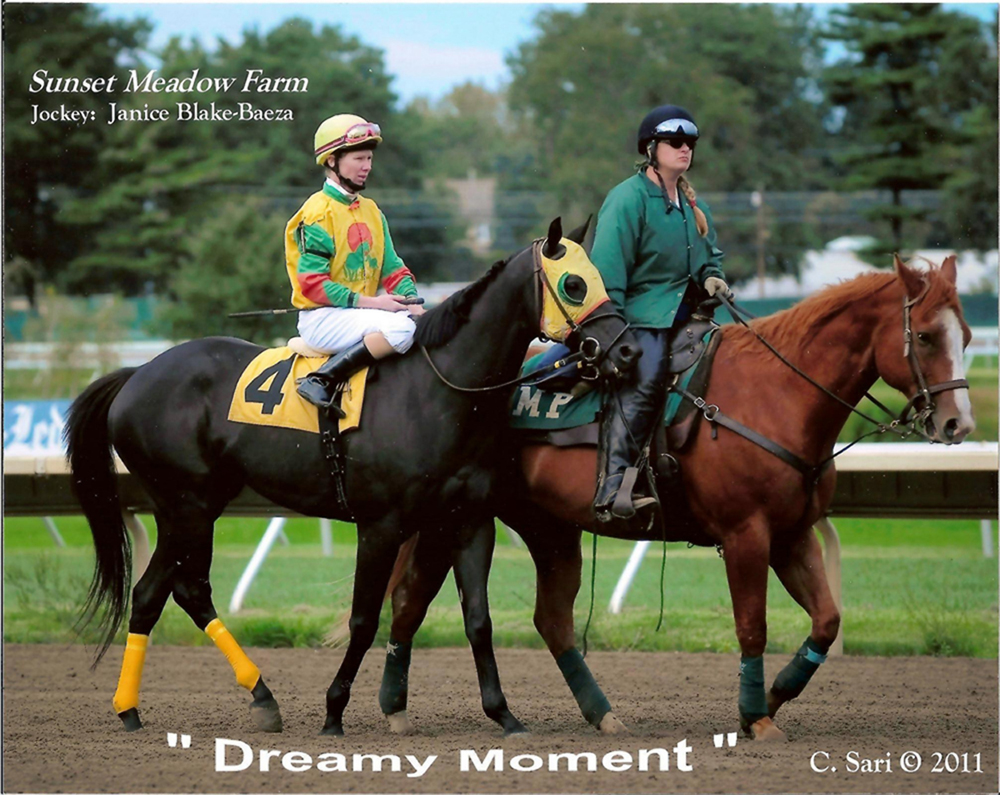 Janice L. Blake is a jockey I have known for years. She was interviewed when the site first got started a few years ago, so I decided to do an updated interview. Here is what we talked about in 2005:

FOTH: What have u been up too since I last interviewed you a few years back?

JB: I have been riding up and down the East Coast, mostly in the Phila, PA area.

FOTH: Your are currently riding up in NY, and I saw you had a winner up there at Aqueduct. How was that getting in the winners circle up there for you?

JB: It was great.

FOTH: I know you rode in the 2005 Hoosier Park female jockey challenge that they have every year. How did you end up riding in it? Did you contact them, or did they contact you? Did you know that Hooiser has a night like that every year?

JB: A friend of mine told me about it, so I called out there to their management and said I would like to participate. On the day of the races, I flew out there and I flew back home the next day.

FOTH: What was it like riding out there with the female jockeys from all over the place? How was it riding at Hooiser Park?

JB: It was a little different riding with all female jockeys, and there wasn't the same degree of cut throat, "I'm gonna win no matter what, so stay out of my way" kind of feeling. It was more like, "don't worry I'm not gonna shut you off and we are gonna take care of each other" kinda feeling.

FOTH: Did they have an autograph session and stuff like that?

JB: I got there pretty close to post time, so I don't know what they did beforehand, but we just signed autographs on the way back from the jock's room.

FOTH: I know you finished in 2nd place at the jockey challenge and you won a race out there. How was it for you winning a race at Hoosier Park? Was it an unexpected surprise?

JB: Not really. I read the form, and I figured my horse was gonna be the favorite. It was great to win because I am from Indiana and it is the 1st race I ever rode in Indiana. It was really special.

FOTH: Do you have any plans on going back there again if they do another one?

FOTH: How much longer would you like to ride?

JB: Until I can't ride anymore.

FOTH: Do you think when you retire you might want to be an exercise rider or is pretty much retiring your going to get away from horse racing completely?

JB: I love to ride, so I can't see myself not having horses in my life. I really haven't thought about it much though.

FOTH: Do you think another female rider will win one of the Triple Crown Races?

FOTH: I know you have been riding a few years now. From all the different tracks where you have ridden, have you seen female riders get more respect from the trainers and owners?

FOTH: There have been discussions back and forth about raising the jockeys weight a few pounds. Are you in favor of that, or is the weight OK the way it is now?

JB: I think it is OK the way it is. If you can't make the weight you should get another job.

FOTH: Do you think some of the tracks that race year round should cut back during the winter months to give the horses a break, and do you think that is contributing to some of the nasty spills we have had lately?

JB: I think it has to with the responsibility of the trainer and track vet because if you shut down some race tracks there is always going to be some tracks open and trainers will just take their horses there and that's not going to work. I think the people involved in the day to day operations of the horses need to take responsibility and care more about the animal itself and the jockeys that are out there on the racetrack.

FOTH: How do you mentally prepare to ride in a race? Do you go over several scenarios in your head as to how the race will play out?

JB: Yes,I do. I look at the race and see which horses have speed and which horse might be running late, and who might be sending, who might be taking back, how long it's been since the horse has run, did they come off a sprint, and I look at the complete past performance of the other horses as well as mine. I don't go crazy, but I just take a look at it like an overview to see what I might expect. Anything can happen, and you have to be prepared to make a different decision from what you planned on doing at any time.

FOTH: Is it really cold up on a horse in the winter?

JB: No. I can't speak for anybody else, but I don't get cold up on a horse.

FOTH: When it rains does that bother you at all?

JB: No. I rather it not rain, but I just roll with the punches.

FOTH: Going back to Hooiser, had you met any of the riders prior to you riding that night?

JB: Yes, I met Jane Magrell when I was a bug rider down at Tampa, and she was and is always very pleasant, and it was a pleasure to see her again.

FOTH: Were you tired at the end of the night?

JB: I got up that morning at 4:45 and got up on 8 horses, then flew to Indiana that same day at noon. I changed planes in Chicago and flew to Indianapolis then drove an hour to the track, so by the time the races started, I had had a full day. At the end of the night, I couldn't sleep because I was overtired.

FOTH: Do you think more tracks should try to do similar things like Hoosier Park?

JB: Yes, Hooiser Park had a record attendance that night. It gets more people interested in racing and you need a gimmick and that is what that is - a gimmick.

FOTH: Do you think race tracks need slot machines or some other type of revenue to survive?

JB: It seems the ones with slot machines do a better financially.

FOTH: Janice, I am out of questions. Is there anything you want to add to wrap this up?

JB: I am having a great time being a jockey, and I just love it and love everything about it.