Mary C.Brock is a part time rider based in the Northeast area. While riding a recent race over at Philadelphia Park I went up to the jock's room and asked a few questions and here is what she said. 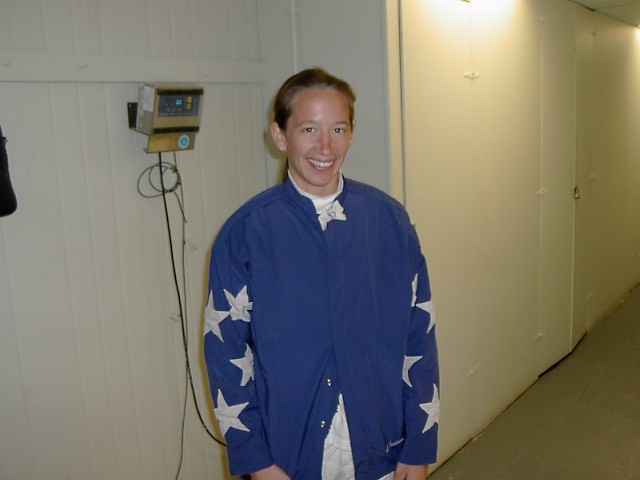 MCB: I was born and raised in Minnesota.

FOTH: Any brothers or sisters? Are you close with your parents?

MCB: I have 2 brothers and 2 sisters. I am the youngest and the only one to pursue a career with horses. I am pretty close to my parents. I usually speak to them several times a week.

FOTH: What sort of kid were you growing up?

MCB: I was always very shy. I usually just kept to myself. Mostly, it was just me and my horse. I rode a lot when I was growing up.

MCB: I always wanted to be a jockey.

FOTH: Is being a jockey harder or easier than you thought it would be?

MCB: It is very difficult to be a jockey. I never really thought it was going to be easy.

FOTH: I notice you pretty much part time. Is this by choice?

MCB: I have always rode part time. I like working for one stable and be able to ride a few horses from that stable. I don't enjoy hustling. (what she means is jockeys or agents going from barn to barn...trainer to trainer to try and get mounts) I'd rather stay in one place.

FOTH: Have you ever had a favorite horse or track you rode at?

MCB: Calla Lily. She was a gutsy filly. I won two races on her at the Fairgrounds. The first race I won on her, we were in almost all the way down the stretch. The announcer never called her until we split horses and got up to win by a head.

FOTH: Do you feel female riders are not given their due respect in the sport of horse racing?

MCB: I think it is very difficult for female riders. Physically, most women just are not as strong as men. That is why I think they are not given as much respect. Everyone knows that you need the horse to win the race. A smart rider is better than a strong rider.

FOTH: How long do you think you will continue to ride for?

MCB: I will just ride one here and one there for hopefully a few more years.

FOTH: What stuff were you taught as far as riding goes? Do you feel you have a certain riding style?

MCB: Andrea Seefeldt taught me one important thing-wait until you think you have waited too long, then wait some more. That is for riding Dickie Small's horses.

FOTH: Tell us about your first race and what you remember about it?

MCB: My first race I rode at was at Retama Park. I rode Valid Fund, he was 10 years old. An old class horse. I just had to guide him I finished 3rd on him.

FOTH: Tell us about your first win. Did you get creamed with stuff after the race?

MCB: I won on the horse I named above the next time he ran which was my next mount. On my way back to the jocks room I saw the other girls with buckets of water or something so I just stood there. They missed me so I didn't actually get creamed.

FOTH: What advice would you give to somebody who wants to be a jockey?

MCB: I wouldn't advise anyone to start riding, but if they really wanted to ride, I would tell them if they can hold down their weight, to get as much experience as possible before riding.

FOTH: After you retire do you plan on staying involved in the sport?

MCB: I hope I don't continue in the sport unless I am training my own horses.

FOTH: What are some of your hobbies or things you do in your spare time?

MCB: Not too much. I watch the races a lot and go for long walks.

MCB: I feel the most important thing to do is to relax.

FOTH: Any last words to wrap this up. Hope to see you in the winner's circle.

MCB: Thanks for the interview and thanks for letting me be part of your web site.