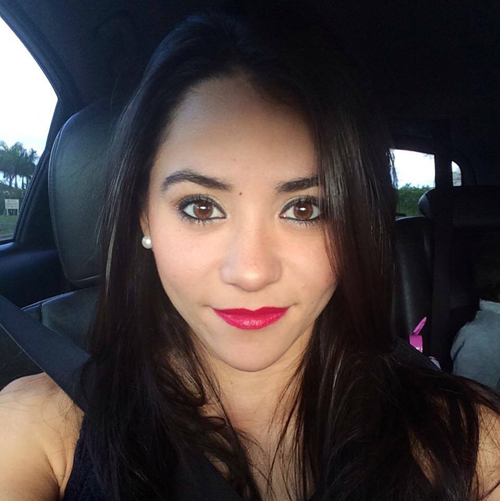 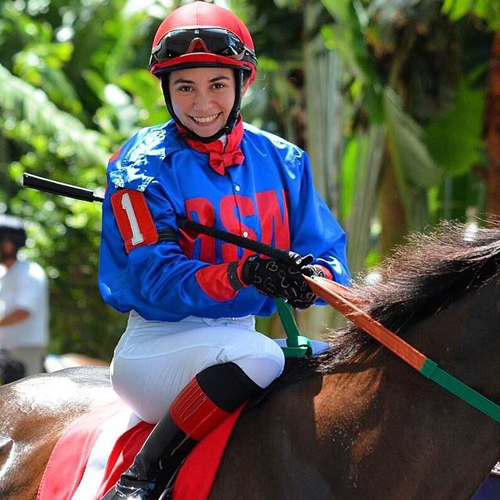 Alexandra Jara is a young jockey riding down in Florida following in the footsteps of her brother Fernando Jara. Here is her story:

FOTH: What was it like growing up in Panama and how long did you live there before coming to the US?

AJ: I grew up in a small town named Chitré, is 4 hours away driving from the city and had a great childhood, a very quit and nice place.

FOTH: You are the sister of jockey Fernando Jara. Did you watch many of his races while you were growing up and at a young age did you know you wanted to follow in his footsteps and become a jockey?

AJ: Yes. Since he was at the Jockey school I watched him and get on horses too, walking around the barn. Always had on my mind that I want to be a jockey but was holding on because of school.

FOTH: Did you get to watch many of your brother’s races and did you see him ride live much before you became a rider?

AJ: Yes I did. And still I like watch him riding. Back in Panama when he started riding I never missed a day of racing.

FOTH: You went to the Laffit Pincay Jr. Jockey School. How was that experience and tell me what led to you going there and what did you parents think about you deciding you wanted to ride races?

AJ: I was studying for dentist. I came to US by December 2011 until February 2012. During that visit I made my decision. It's now or never. Long time thinking about it and I felt it was the time. Mom and dad were ok with it they like it and I think at some point they knew that one day I will come to them and say: I want to enroll at jockey school.

AJ: The school is a 2 year program. We were around 14 students. I learned to groom and gallop. The harder maybe was to breeze with a time.

FOTH: Now how long did you end up riding in Panama before you came to the US? Is there many tracks to ride in Panama and did you win many races while you were there?

AJ: I rode my first race on December 8th, 2013. There is only one racetrack and I came with 35 winners and was leading jockey.

FOTH: Now in early 2014, you came to the US to ride. Now that you have been here a bit, what are some of the differences between riding races in Panama and the US?

AJ: The most difference I feel is the track. I'm getting used to feel different tracks.

FOTH: Now tell me about your 1st race in the US. What track it at and where did you end up finishing?

AJ: My first race here was at Gulfstream Park and arrived in 4th place.

FOTH: Tell me about your 1st win. What track was that at and when you crossed the finish line did you know that you had won the race?

AJ: My first win was at Gulfstream Park. A 80-1 shot. And yes I felt very confident that I had catched him.

FOTH: You are down at Florida and riding now. How has that experience been so far?

AJ: It has been a great experience. I've been learning a lot.

FOTH: For the time being to you pretty much plan on staying and riding in races in Florida or do you plan on riding in other places besides Florida?

AJ: Have not decided yet. But would like to go another place and try a new experience.

FOTH: Take me through what you do on a typical race day.

AJ: Work in the morning then go home to change to be back at racetrack early.

FOTH: What are some hobbies or things you like to do when you are not doing horse related things?

AJ: I don't hang out too much, usually I stay at home. But now that I'm with my family I enjoy spending time with my nephew and niece.

AJ: Keep up in the business and do as well as I did back in Panama. I expect the opportunity to get better and ride the big races. I want to ride for a long time. As long as God gives me the opportunity too to stay.

FOTH: What did you brother Fernando say to you when you told him you wanted to become a jockey?

AJ: He wasn't happy at all but was very supportive.

FOTH: When you are in the jockey’s room before you ride, do you ever look over the program and try to study the races your riding in later that day?

FOTH: So far as the experience of being a jockey what you thought it was going to be?

AJ: Better than I thought.

FOTH: Have you ever been recognized outside the racetrack yet?

FOTH: So what are some of the neat places you have visited in Florida so far?

AJ: Beach couple of times. And Disney for the first time ever, was a Family Trip.

FOTH: Alexandra I am out of questions. Thumbs up for doing this interview and any last words you want to say to wrap this up?

AJ: Never give up. Always follow your heart and your dreams and work hard to accomplish them with faith in God.