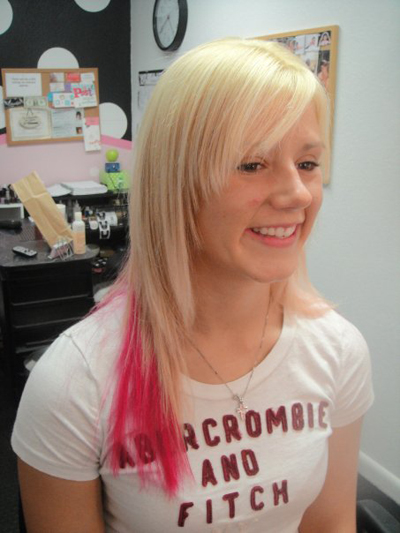 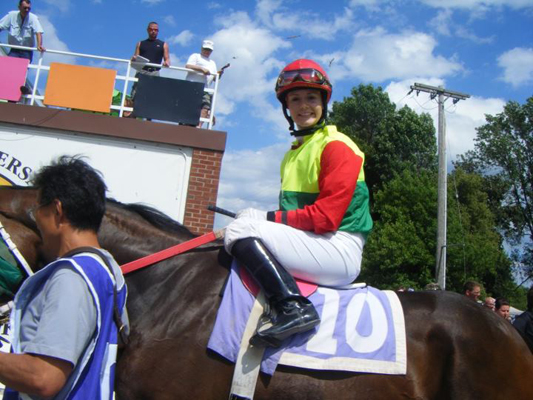 Betty Jo Williams is a female jockey currently riding up at Fort Erie in Canada and I emailed her some questions and here is what she said to them:

BJW: When I was younger I was a tom boy for sure, I grew up with 13 cousins an half of them were boys.

FOTH: When did you start to discover a love for the horses and what did you want to be when you were growing up?

BJW: My parents were always involved with horses, my dad being a trainer and my mom an owner so loving horses was natural, from day 1 I wanted to be a jockey.

BJW: I was on the track a lot when I was younger because that was my parents life, and they didn’t dare leave me home because they would hear about it lol. My parents were stabled at Woodbine until I was 10. They don’t give you a real license until your 12. My first real job was a hot walking job at Fort Erie race track.

FOTH: Now take me through the steps that led to you becoming a jockey.

BJW: I started galloping a little when I was16 on the track for my dad on an off, but it really started the winter I went away to Ocala Florida, there I started getting on babies that winter. Following that winter I went to Colonial downs where I galloped and rode in my first amateur race. It wasn’t till 2009 in the fall when I rode my first race at Mountaineer Park in West Virginia.

FOTH: Was it natural getting up on a horse for you and who taught you how to ride?

BJW: It was very natural for me to get on horses because my mom taught me how to ride from when I was really young. Learning how to gallop was the difficult part. Thank you to my Fiance Nathan for pushing me to do it.

BJW: Looking back becoming a jockey was way harder then I could ever imagine, people think well you can ride so it will be easy. Think again. It is two totally different worlds.

FOTH: Tell me about your 1st race. What track was it at and were you nervous at all? Where did you end up finishing?

BJW: My first official race as a jockey was at Mountaineer Park in West Virginia, I was a little nervous but not too bad. I was kinda like let’s get this show started. I’m pretty sure I finished 2nd last, my horse broke bad an couldn’t make up all the ground we lost in the start.

FOTH: Tell me about your 1st win. What track was that at and did the jockeys get you good afterwards and did you know it was coming?

BJW: My first win was on the same night as my first race. I was scheduled to ride 2 horses that night at Mountaineer Park in West Virginia so Immediately after riding my first race, I came back in the the 6th race I think it was an won!! I was so happy when I came back I totally forgot about getting initiated. They got me good! I will never forget being picked up and dunked in the water trough and then being soaked with buckets of water and loads of baby powder.

FOTH: Tell me a little bit about Fort Erie and is it a nice race track?

BJW: Fort Erie is Awesome!! lol Fort Erie is a little town across the border from Buffalo so our nick name is called the boarder Oval and if you talk to anyone in the racing industry they have been to the Boarder Oval an can’t stop telling you how beautiful it is. The back side is so horse friendly, and the town is small but it has everything you need.

FOTH: Have you had any injuries so far in your riding career?

BJW: I have been very fortunate in my racing career to be injury free. When I first started galloping I broke my left ankle.

FOTH: What are some of the best and worth things about being a jockey?

BJW: The best thing about being a jockey is being able to have the opportunity to ride some nice horses, young horses actually because you never know how good they can be. That’s why I get up every morning for the horses. The worst thing would probably have to be watching what you eat. I eat pretty healthy but every once in a while I like to eat a hamburger lol.

FOTH: Take me through what you go through in a typical day?

BJW: Well I get up early in the morning about 5:30 take care of my dog then head to the race track for morning works. Usually I meet up with my agent before we get started to go over what needs to be done that particular morning. After morning work outs are over depending on if its night racing or afternoon racing I will get a work out before I head to the jocks room to prepare and handicap my races for that day.

BJW: I think I do. I like to be patient and I think the horses appreciate it.

FOTH: If a young girl came up to you and said she wanted to become a jockey, what advice would you give to her?

BJW: I would tell her that she can do anything she puts her mind too, but work, work, work hard. Because it’s not easy for a female in a male dominated sport but if you work hard you can change people’s minds.

FOTH: Is there any track you would like to ride at one day that you haven't as of yet?

FOTH: Do you have to watch what you eat or you don't have weight problems at all?

BJW: I don’t really have to watch what I eat I am very fortunate. When I had the bug I struggled with my weight, but now that I am a journey man. I can eat regular. I am a very healthy eater so I think that helps a lot.

FOTH: Do you think we will ever see another Triple Crown Horse?

FOTH: How do you prepare to ride a race? Do you do the same thing pretty much every day when getting ready to ride?

BJW: I prepare by working out before I go to the jocks room I then pull out my little book with all the horses that I had rode, write down on a new page the ones that I ride for that night. I then handicap the races where I think everyone should be. After that I get dressed do some stretches n go out to ride. Oh one thing I do is I always have a piece of gum in post parade and spit it out before I get in the gate.

FOTH: Do you feel you are still improving as a rider?

BJW: I think I am always improving. You learn something new every day. Not only from the people but the horses.

FOTH: Do you have a favorite trainer that you like to ride for and what has been your favorite horse you have rode so far?

BJW: I love riding for all the trainers that have named me on horses. My favorite horse to ride would have to be a horse by the name of Sir Heart Throb he was my first mount at woodbine and my first win there so he holds a special place in my heart.

BJW: For as long as I can. I’m still young so the sky is the limit.

FOTH: Do you think slot machines at racetracks helps or hurts tracks in the long run?

BJW: I don’t mind the slot machines at racetracks. I think they have some positives and negatives. I think if managed properly they could help us in the long run.

FOTH: If you could change 3 things in horse racing, what would they be and why?

BJW: I think 1 major thing I would like to see be done is being able to place more race horses in homes after their careers are over at the track. With saying this, I have seen a lot of improvement to do so and I am grateful for all the programs that have been developed to make this happen. It’s a lot about the horses, they are the reason why us horse people have jobs.

FOTH: Betty Jo I am out of questions. Thumbs up for the interview and any last words?

BJW: Thank you for the interview and keep up the nice work on the website.