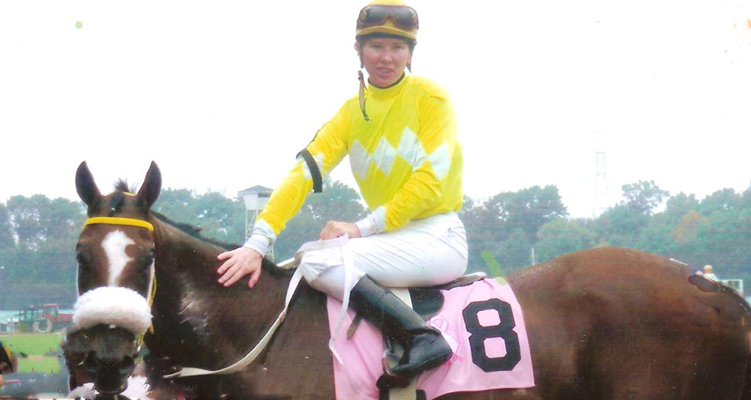 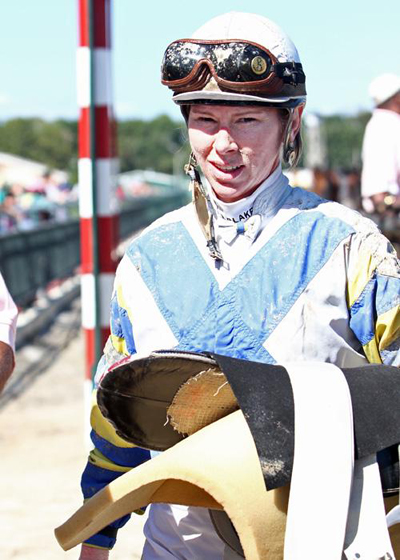 I have known Janice Blake-Baeza for over 10 yrs now, starting when I was working at Garden State Park. Since it has been quite a while since our last interview, I thought it was time for a new updated one, so I sent her some questions. Here is what she said to them in 2010:

FOTH: I know you just got back from Brazil. How did that go, and how did it come about that you got asked to do this? How many other girls were in the challenge? Who won, and did you win any races?

JBB: Brazil was a fabulous, international experience. It was eye-opening, as I observed another culture and their way of solving the same race track problems with horses as we are trying to do here. I was invited by the race track, Hipodromo do Cristal in Porto Alegre, Rio Grande do Sol, Brazil. That's the name of the racetrack in Porto Alegre. The city is called Porto Alegre, the state in Brazil is Rio Grande do Sol. It is very far south from Rio de Janeiro and Sao Paolo. There were 7 women in the Tournament, me included in that number. The winner was Lu Andrade. We rode in 4 Tournament races. I did not win a race, but finished second in one race.

FOTH: You have been riding for a number of years now. What has been some of ups and downs of being a jockey?

JBB: Certainly the ups are winning and thereby riding with confidence. The downs are when you ride a good race and hit the board and the next race, the trainer puts on a leading jockey.

FOTH: Don't you miss a certain person in security that used to bother when you rode at Garden State Park and Phila Park?

FOTH: Do you feel you have a certain riding style, and how long did it take for you to really get comfortable being a jockey?

JBB: My riding style is aggressive. I felt comfortable as a jockey in the early middle of my bug year.

FOTH: What is the worst thing or mistake you made during the running of a race?

JBB: I hit Mike Luzzi on top of the head TWICE in one race. He said "ouch" the first time, so I went to smack my horse again, and he said "ouch" again! Oops!

FOTH: Which do you like riding better, dirt or turf or it doesn't matter?

JBB: I don't have a preference.

FOTH: Speaking of turf, what is it like to ride on the Atlantic City Race Course turf, and have you had a chance to ride at Colonial Downs?

JBB: Atlantic City has the best turf course around. It's flat and smooth and the grass is kept on the long side. The surface plays evenly much of the time. Spectacular course. I've only ridden at Colonial once or twice, so I can't really say.

FOTH: I know you have a website, what is the url, and what can people find when they log on?

Mostly there is information there about my ebook, available on amazon.com, called How to Exercise a Thoroughbred Race Horse. The site has articles taken from the ebook, so people can get a preview of what it's like and if they think the information will serve them. I have 13 five star reviews on amazon for my ebook.

I also have photos from my career and other horse racing information available on there.

I hope to get my ebook published in hard copy by the end of the year.

FOTH: After you retired from being a jockey, would you like to still be involved in horse racing in some way?

FOTH: Is there any track that you have not ridden that you want to?

FOTH: I know you have done several female jockey challenges over the years, are they as fun as they look? and do you have a favorite one that you have done?

JBB: Yes, the Female Jockey Challenges are a blast. It is fun riding with all women jockeys and having so many female jockeys in the room at one time. No, I don't have a favorite.

FOTH: I asked this before and I'll ask again, what advice would you give to a young woman if she wanted to become a jockey?

JBB: Don't stop. Just keep going and going. Something will turn up. Don't give up, especially when everybody and everything says you should.

FOTH: What is the funniest thing you saw during a race or up in the jock's room?

JBB: That would have to be Gabor playing his guitar with a sombrero, jock strap and cowboy boots during the last few days of Garden State. Hilarious!

FOTH: What is the funniest prank you pulled on another jockey?

JBB: I can't think of anything. I'm not exactly the prank-pulling type. I have told a jockey that his horse scratched and then said "just kidding." But that's not a prank, that's kind of mean.

FOTH: What has been the worst injury that you have had as a rider?

FOTH: Answer this, if you weren't a jockey you would be:

FOTH: What are some hobbies and music that you like to listen to when you’re away from the track?

JBB: I enjoy going to the City (NYC), reading, and I listen mostly to old music from the 60s and 70s, like Jim Croce, and that whole crowd.

FOTH: As a jockey, can you tell when some jockey has given a horse a bad ride?

FOTH: Longest shot you can remember bringing in.

FOTH: What has been the best and worst racetrack that you have rode at so far?

FOTH: Take me through what a typical day is like for you nowadays.

JBB: I am working for Barclay Tagg in the mornings and riding in the afternoons. If I don't ride, I usually go home and work on the computer, marketing my book, writing my next one, answering emails, creating websites, and learning about the real estate business.

FOTH: If you owned a racetrack, what is some stuff you would try and do to lure people to the track?

FOTH: Where do you see yourself in 5 yrs?

JBB: Living in Nassau County, buying and selling commercial real estate, being a philanthropist, giving lectures all over the world.

FOTH: I am out of questions, thumbs up for this new interview and speaking of thumbs, does yours ever tire of going up for me?

JBB: Absolutely not, Chris. ...and a big thumbs up to you for all you do for the female jockeys. Thank you again.