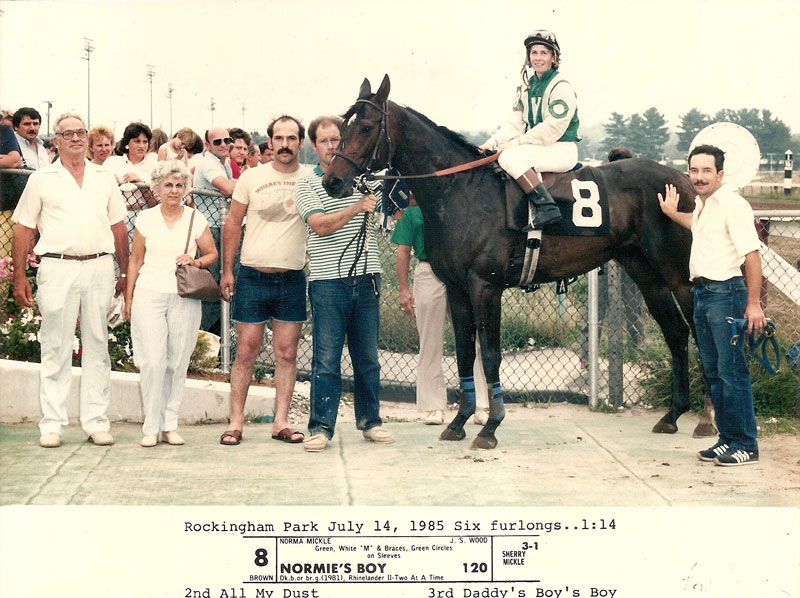 
SW: I think I was a typical girl. I loved horses, played with dolls and had a great life growing up in the country.


SW: I think I always loved horses. I started riding at age 3. My family owned a picnic/amusement park back in the '50's. We had a big pond for swimming, small boats for kid rides, a store to buy ice cream and such, a large picnic area, and the most important part (as far as I was concerned) pony rides. Well, you can guess where I spent my time. My father put me on my first pony and I was hooked. After we sold the picnic place. The ponies got sold. I spent the next two years begging for a horse. Finally, my father, a cop in Pittsfield, did a month of overtime and bought me a $150 green OH/Mustang cross. He dumped me many many times during my 9 year old year. But we finally bonded and I spent the next 8 years doing gymkhana with him. He was especially good at pole bending. Many trophies and ribbons later I retired him. He lived to be 36 years old. In the mean time I knew without a shadow of a doubt I wanted to do something with horses, I wasn't sure what. My mother insisted on my going to college "as a backup". So I did. Went to Northampton Junior College for one year. Hated it. Came home and announced I wanted to be a jockey. Needless to say it didn't go over great. But my parents were terrific, and decided if that is what I wanted they would help the best they could.


SW: I lived only 30 miles from Green Mountain Park. But I didn't think I was good enough to go ride thoroughbreds. And there were so few girl riders in 1972 that I contacted a running quarter horse trainer who lived nearby in NY State, Al Buck Dogde. He agreed to teach me to ride race horses. I spent 6 months learning to gallop and ride and we went on the road. The trainer, his family and me. Luckily he had very talented stock and I won lots of races in Michigan and Canada and Ohio. I don't think I had a clue what I was doing, just hanging on. Had one rider run me through the outside fence at a fair in Ohio and I broke my femur. I was laid up for a little more than a year. And at that point decided there was more money in TB racing and went to Green Mountain Park to find someone to hire me to gallop. It was a 30 minute drive from my house. Every day for at least a month I had to pull over to the side of the road and vomit, I was so nervous about riding again. But I knew I had to get past that in order to ride and I was determined.


SW: Luckily it was very natural for me on a horse. I had many teachers, including a rider who eventually became my husband, Jerry Wood. The riders at Green Mountain were like a family. I listened to everything everyone told me and tried my best to do it right.


SW: I think I expected it to be hard. But, like everything you do that you really want to do, there are hard times and good times. I certainly would never call it easy.


SW: To be perfectly honest. I don't remember my first race at all. I think it all happened so fast it went right by me. I just remember trying to stay out of everyone’s way!


SW: My first win was on a horse called Score W. He was a come from way behind type and I kept running second on him, because I couldn't keep him up close enough to make the run make it to the front. My husband -to-be explained how to warm him up real good ahead of time and that would work. Well, it worked alright. Jerry was in front all the way and I came from last to beat him at the wire. They threw HIM in the pond! Didn't do a thing to me. It was very very funny.


FOTH: You told me you rode from 1973 to 1986. What tracks did you ride at and was it tough being a female jockey back in those days?


SW: I'll give you a list: Green Mountain Park, Narragansett Park, Lincoln Downs, Suffolk Downs, Rockingham Park, Pocono Downs, Finger Lakes (for 8 years), Woodbine, Fort Erie, and Tampa Bay. I was very lucky; I didn't run into a lot of perjuries back then. Of course there were always the select few who just didn't like girl riders. Getting mounts was always a challenge. But on the whole, I think I got along with most everyone.


FOTH: What led to you retiring in 1986 and were you sad at all having to retire?


SW: I was just ready. I still loved the horses and riding. But selling myself to trainers everyday got old. I wanted to go home and stay in one place and start my farm for babies and lay-ups.


SW: Well the big one was breaking my femur. But after that just the usual broken collar bones, fingers and toes. I fell on my head once coming out of the gate in the morning and had terrible whip lash. That pain lasted for many years. I finally in 2006 had to have a discectomy in my neck for a disc I'm sure I damaged in that spill.


FOTH: What are some of the best and worse things about being a jockey?


SW: That's a tough one. I loved being a rider. The excitement, the being one with your horse, winning of course! I used to love galloping in the morning when it was warm and I little foggy and I was the first one on the track. Very spiritual. The worst thing I think was selling yourself to the trainers everyday. I really hated that. I very seldom had an agent.


FOTH: Now you also told me you came back to ride in 1999 and rode till 2001. What led to this and what tracks did you ride during this 2 year period?


SW: My husband and I decided to buy a couple of 2 year olds and train them for the races. I guess we missed it a bit. So we trained them at Saratoga (about an hour’s drive from our farm in Pittsfield, MA) we only got to run one there. By that time he was 3 and I ran second on him in a NY bred maiden race. I loved riding there. Then we went to Delaware I rode a few times there. Then that gelding got claimed and we ran the filly a few times with no luck. By that time we had built a new farm in SC. We ran that filly at Mountaineer for 2 years. She won four races but I was done riding by then. It was fun to come back for a while. But I was done. By then our farm in SC was picking up clients and I was breaking babies and doing lay-ups. So we were too busy to race anymore. Which was fine with me.


FOTH: How much fun was it riding your 1st race back in so many years? Were you nervous at all and what was the feeling like after getting that 1st race back under your belt?


SW: I have to be honest I don't remember a thing about it! I'm sure I was nervous. But I remember always being a little nervous until I got on the horse, then I was fine.


FOTH: Now what led to you retiring a 2nd time in 2001? Did you know at the time of your last race that it was going to be your last race?


SW: Basically it was just a lark. I wanted to just ride our horses and I knew it was only going to be for a short time until we got our farm in SC going.


SW: No, not really. When I came back I got to ride at Saratoga and I think that was the only place I wanted to ride at that I had never before.


SW: I just turned 59! But I am still fit and only weigh 105. So maybe.......
FOTH: When you look back over at your career what are some of the good and bad times that you remember?


FOTH: What are you doing with yourself these days?


SW: I own a beautiful 30 acre farm in SC that has several barns, run-in sheds, a race track and tons of turn-out. I take care of babies to retirees. I gave up breaking babies last year. I love it here. I also have a small house near Myrtle Beach that was willed to me. I try to get there at least once a month. Unfortunately, my husband has many health issues including heart disease and Alzheimer’s. So far the Alzheimer’s is very mild. Life sends you curb balls sometimes.


SW: I would make a rule like in Ireland, that you can only hit a horse so many times during a race or be disqualified. I don't believe beating up a horse makes him run any faster. Hit him once or twice and he's going as fast as he can on that day.


SW: I do believe they have saved a lot of tracks. I think we would have lost many more that we already have if it weren't for slots. Sad but true.


FOTH: Sherry I am out of questions. Thumbs up for the interview and any last words?


SW: Thanks for the interview and good luck with the website.