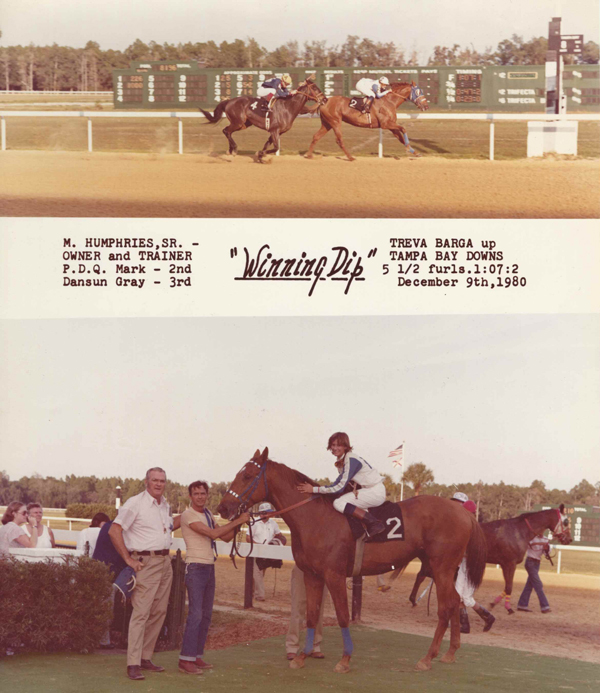 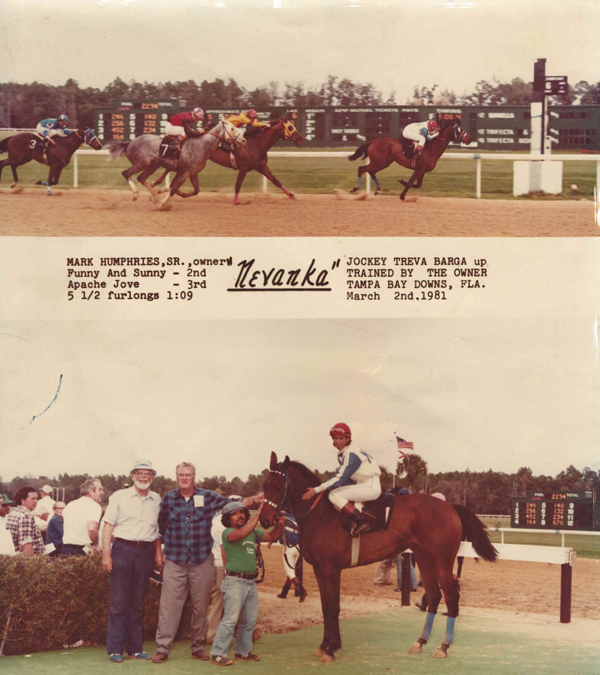 Treva Barga only rode for a couple years (80-81), but she still has a neat story to tell and here is my interview with her:

TBV: I was born in Mississippi but raised in Florida. New Port Richey and Shady Hills

TBV: I was a shy girl. I was kind of a tomboy and always liked being outside.

TBV: I always wanted to be jockey ever since I was six years old. I wanted to be like Willie Shoemaker. I came from a small family. Mom, Dad and 2 sisters, one older one younger, but I had lots of cousins.

TBV: Six years old. I would guess just from watching the Derby on TV. My dad bought two ponies and then bought me an old horse (Jacob) from an action and rode him home because we had no trailer. I grew up with that old horse. Learned how to barrel race on him until I got a better horse.

TBV: I had a couple of close friends. One loved horses (Vicki) she would work at the track with me and one wasn't into horses (MaryAnn), but always supported me.

TBV: When I turned 16 I got a job with Mark "Doc" Humphries, at his farm in Brooksville Florida. He had horses at Florida Downs. I learned most all my thoroughbred knowledge from "Doc". He helped me get my license. During the summer I would feed horses at the farm in the early morning then get down to the track and gallop the horses. Because he was an eye doctor, I would go help in the office as well, then it was back to the track to feed and back to the farm to feed.

TBV: I knew I always wanted to be a jockey. I think as an ex-rider it was just the first step to being a jockey.

TBV: I had already been barrel racing for some time. riding came naturally. I learned a lot from Doc Humphries and I learned from watching other riders, I learned a lot on my  own.  You have to listen to people. You learn to keep the good stuff and get rid of bad stuff.

TBV: I really didn't exercise long before getting my jocks license, maybe a year. I worked very hard and listened well. In retrospect I could have learned a lot more before getting my license. It was a lot of work juggling school, and working all the time, but I loved it. I know I wasn't the best rider but I always rode my best.

TBV: I think I couldn't stop smiling for a long time. I felt l really had accomplished something I wanted to do.

TBV: I think they were excited and scared at the same time. It is a very dangerous job, but, they signed the papers so I could ride. They came to the races when they could and they were there for my first win, so that was great.

TBV: I don't think I really ever thought about how it would be. It was a job and it was hard. I had a trainer that encouraged me. I think the hardest part is that you have to be rough. People told me I was too nice to be a jockey.

TBV: My first race was very exciting and I would be lying if I said I was not nervous. It was at Florida Downs on 1/3/1980 and I finished 2nd on a filly named “Queen Alief”.

TBV: My first win came on my sixth try. I had just had an article about me in the newspaper (which was fun) It was also at Florida Downs. I lost my whip coming down the stretch and I just started screaming and slapping the horse with my hand. I came from behind and won by 3/4 of a length. (I later married the jockey that finished 2nd). I was so happy jogging back, I just kept thinking about what to do when you get to the winners circle.

TBV: I knew it was coming, but you can't get away. I think it was water, ketchup, eggs, who knows what else.

TBV: I rode at Florida Downs which became Tampa Bay Downs the same year in 1980 and then 1981. I didn't ride at other tracks during the summer. I was still in high school when I started riding, I was only 17. Just before the end of the meet in 1981 I left Tampa with my husband and went to Beulah Park where I rode only a few. I never had an agent (I think it is important that you do). Then I became pregnant with my first daughter and didn't go back to riding after that. I will always love Tampa Bay Downs because it is where I started and is close to home.  My husband is a successful trainer here in Ohio so we have stayed here. One day we will get back to Tampa

FOTH: When you were riding do you think you were treated pretty fairly or do you feel you really had to work extra hard to get the respect of your fellow riders and trainers?

TBV: I rode mostly for one trainer, so I didn't really deal with a lot of other trainers. Most trainers back then might have liked you but still rode the guys. This is still true today I'm sure. Other riders can be hard on you especially when you are very young, shy and not having much experience. You have to let comments run off you like water on a ducks back, but that can be hard to do. It is best just to listen and be quiet. You will be the better person for it. Everything is a learning experience.

FOTH: What are some of your favorite memories you have as a rider?

TBV: I guess the first thing is winning. Meeting all kinds of people. It is neat to say I got to ride with Julie Krone, who is one of the best! I love horses, god created a magnificent animal. The whole thing is something not too many people can say that they got to do. It was fun riding while still in school and having an article written about me. I don't want this to sound like I'm prideful because I'm not. It was something that was exciting at the time for a young shy girl from a small town.

FOTH: What sort of injuries did you have and what were the worst ones?

TBV: Thankfully  I never had any injuries. I only fell once and that was after the race jogging back, the horse went one way I went the other (that was embarrassing).

FOTH: What led to you retiring and did you really miss riding when you did?

TBV: Starting having a family. I did miss it, but god has a purpose in everything. I have no regrets.

FOTH: Do you think we will ever see another Triple Crown winner?

TBV: I hope so. I think it will give racing a boost.

FOTH: What advice would you give a young girl who wanted to become a jockey?

TBV: Don't rush things. Work hard. Make sure that you are ready. Stay true to yourself. I see so many girls hooking up with the wrong crowd. Not everyone is looking out for your best interest. Be smart. If you want to be respected you have to show respect.

FOTH: Treva thumbs up for the interview any last words?

TBV: Thank you for the opportunity to do the interview. It has brought back lots of great memories. It is hard to believe how long ago that was. Even though my riding career wasn't long. I'm glad that I was able to do it. It was a great experience and I learned a lot about my strengths and weaknesses. If you are allowed to write this? my life verse is Jeremiah 29:11  I know the plans I have for you "declares the LORD" plans to prosper you not to harm you, plans to give you a hope and a future.