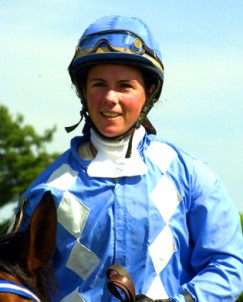 Blythe Miller is the only female steeple chase jockey riding the circuit nowadays. Steeple chase riding is very different from a regular horse race as you will find out as you read this interview. I have seen Blythe ride in a few stake races and recently she won a big $175,000 stake race at Keeneland in spite of me calling and waking her up from her nap. (sorry about that Blythe) Blythe has won over 300 steeple chase races and I got Blythe on the phone when she was not napping he he and here is what she said. 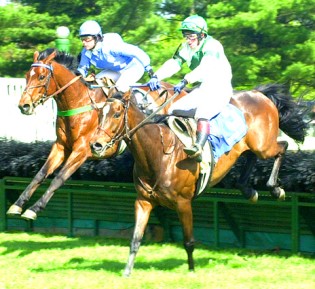 BM: I was born in Abington, PA and I grew up in Concrenville, PA.

BM: Yes. I have one brother named Tim and a sister named Ann.

FOTH: What did you parents and even your brother and sister think when you told them you were gonna be a jockey?

BM: Well we grew up on a farm and we did pony racing so it really wasn't a surprise to any of them because that was really the only thing I was ever good at. (laughs) My brother rides also.

FOTH: When you were young did you know you wanted to be a jockey?

BM: I always thought when I was young that I wanted to be a flat racing jockey. I never thought I would get into steeple chase racing. Not a surprise cause I was doing pony racing every weekend.

BM: Well, we would go to the hunt meets cause my parents they trained horses so to me really it was almost second nature.

FOTH: Can you tell is anything you remember about your first race?

BM: Well the first race I ever rode was on a horse called "Yale Key" at Fairhill and I actually won. I was only 16.

FOTH: Wow first race. Did you end up getting creamed with stuff after the race?

BM: Yeah they dumped water on me.

FOTH: I know you ride a lot of steeple chase races. Did you ride in many thoroughbred races?

BM: I have done some, but not a lot. (Jims note: the first time I ever saw Blythe ride was in a turf race at Philadelphia Park back in 1999. She won on a horse named Erin Go Bragh.)

FOTH: For those who don't know what is the difference between steeple chase races and a regular thoroughbred horse race? Which do you prefer?

BM: Well there is a big difference, but I don't know if I could explain it. I am definitely more comfortable and better and steeple chase racing and I have been doing that longer. So that is something I just do. The difference is steeple chase races are much longer, it is also much more tactical, like a jump race is a much more tactical race, how your horse is running, how it is jumping, where your horse is in the race, there is much more that can make than happen in a flat race. I'm not undermining flat racing or saying there is no tactic involved, but steeple chase racing is longer and you have to jump, it is important that your horse jump well, it is important knowing how far you have to go, how your horse is running, etc. There is a lot more involved in the course of the race than just having a clean trip or the fastest horse. Most times in a flat race the fastest horse is gonna win.

FOTH: Is it difficult to manage your weight as both a flat racing jockey and a steeple chase jockey being that the weight in a steeple chase race is 10-15 pounds heavier than in flat races.

BM: Yeah, actually I have a hard time doing the flat weight, but I don't have trouble with jump races, but I have to carry a lot of lead. (she means in the saddles putting one pound weights in them so the horse gets the correct assigned weight-Chris) I mean most of the jockeys doing jump riding are 5 foot 10 inches and weigh comfortably 145-150 pounds. They are just bigger guys which they need to be because it is a much more physical sport and they need to be stronger to do it. My size is not perfect for jump racing. I mean technically I would be a little small and a little weak for jump riding.

FOTH: Are there many other female jump racing jockeys?

BM: No. I think there maybe one other, but I'm not sure.

BM: I would guess the Breeder's Cup and Keeneland as they are both big races. I recently won down there for $175,000.

FOTH: What has been your most proudest victory so far?

BM: I would have to say the race "Lonesome" and I won at Handown Park just because it was, well the race itself was not a big race. It wasn't his biggest race he ever won in that park, it was the most special race cause it was such a challenge to him, the horse, and to me cause it was different than anything we had ever done. It is always fun to win a race when youre exceeding the probability of something like that. The race was over in England and there steeple chase fences which opposed to their hurdles which are different for anyone that knows.

FOTH: What was it like riding and winning a stake race at Saratoga?

BM: It was great. It was fun. It is always fun to win. I love to win the big races on good horses because they are so much fun to ride.

FOTH: What sort of injuries have you had over the years?

BM: I've had multiple injuries. Broke my collarbone 4 times, had a severe concussion, broke my wrist and my foot. The worst was probably my severe concussion as it was pretty bad and took me awhile to come back from it.

FOTH: What are some of the tracks you have ridden at? Are there many tracks in the US that have steeple chase races?

BM: No, not many tracks at all. There is about 5. Churchill, Tampa Bay Downs, Saratoga, Pimlicio and Belmont that is about all.

FOTH: Do you have a favorite track you like to ride at?

BM: My favorite tracks are Keeneland and Churchill. All racing in Kentucky is so fun to be part of because the fans are so into racing and they love the sport. It's fun cause they are into what we are doing.

FOTH: The day before this interview I did some research you on the internet about you. I see you have been to Japan and some other countries. Have you had to adjust your riding style to fit what country you are riding in?

BM: It is much different. I have been to England as well as Japan. It is much different in both countries than America because it is all different. When you go to Japan the racing is so much faster than US racing, which is faster than England racing. The fences in the US are all the same, it is really hard for horses to adjust as fences in Japan are different and they lose time in the air, which makes it hard to compete. In England though, the racing is usually softer. It's harder on a US horse cause they are not used to that ground.

FOTH: How are the crowds over in Japan and England?

BM: The crowds are very much into the racing there.

FOTH: Did you get to see any of the country or did you fly in, race and fly out?

BM: I would just fly in, race and fly out.

FOTH: How long have you ridden for and how much longer would you like to ride for?

FOTH: Have you had a favorite horse or trainer you like to ride for?

BM: I have been very fortunate to ride for a lot of good trainers and a lot of good horses. My favorite trainer would be my dad and horse is "Lonesome Glory."

FOTH: What advice would you give to a girl who wanted to be a jockey?

BM: She better want to work hard. Be determined cause it is a demanding sport. It is a demanding way of life. If your a steeple chase jockey your riding once a week. The rest of the time youre working.

FOTH: Do you feel female riders get the respect they deserve or no?

BM: I think it's a very earned respect. Once you earn it, your respected. I'm very lucky as I am treated well, but it is something that I earned. When I started out people didn't take me for real. It was harder when I started out even though their had been ladies that had done well, they had not ridden as much as I rode, so the guys back then, their egos were hurt, but I have done it for so long, it's no longer a disgrace when a woman beats them in races. For girls starting out they may not get the opportunities as if it is a choice between a girl and a guy, the guy usually gets it. But if they stay at it and show they really want it, they may be given a chance to do it.

FOTH: Do you get nervous before a race?

BM: I don't get nervous, I get excited. Once youre up on the horse you pretty much concentrate on getting everything done smoothly.

FOTH: Do you plan on staying involved in horse racing after you retire?

BM: I don't really know what else I would do so I really can't say. I'll always be involved in horses somehow, because it is just in my blood.

FOTH: Looking back now, was being a jockey harder or easier than you thought?

BM: It is much harder than I thought it would be.

FOTH: Do you have any hobbies or things you like to do when your away from horse racing?

BM: I love to go running. That is basically about it. I work all day long so I never have much free time. In the winter when I go to Florida and I just gallop in the mornings I run in the afternoon or play tennis.

BM: I loved Julie Krone. I rode a lot with her when I was young. I dont see many other riders especially now.

FOTH: Blythe thanks for the very interesting interview. Any last words?

BM: No, but I want to say I didn't mean to sound arrogant like when we were talking about woman gaining respect in the sport. I think it is a hard thing that woman have to earn respect, but please don't think I think I'm anything special or think I get respect because that is not what I meant.

FOTH: I did not think you came across that way.

BM: I have been lucky to ride some very good horses so that is what I meant to say. Also good luck with your website and I hope to see a copy of it when you post my interview.

Blythe Miller with the cup after winning the Breeder's Cup Steeplechase.