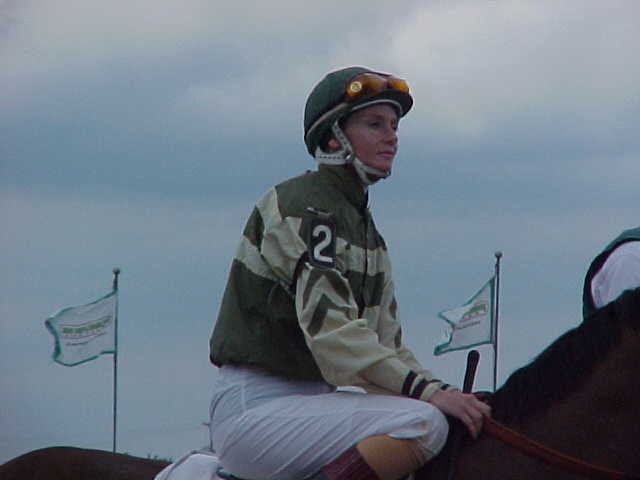 Jennifer Bramblett is a jockey we are both friends with and it is a pleasure for both of us to have interview included on our site. 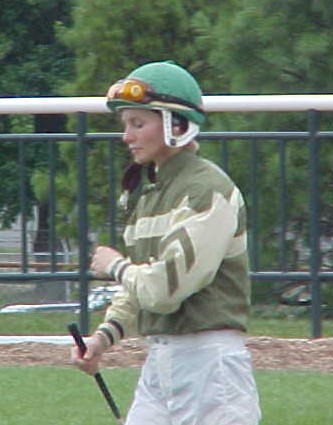 Jennifer Bramblett in the paddock at Philadelphia Park, 2001

JB: I was born in Palm Springs, California and I grew up in Northern Arizona about 90 miles north of Phoenix in a town called Cornville, Arizona.

JB: I have 2 brothers, one older brother named Justin and one younger named Travis. No sisters. My parents, they are excited that I am a jockey. My mom gets a little nervous sometimes, but she was the one who got me involved in horses when I was 2 years old. She does get a little worried because I have already had a few accidents and it worries her a little bit, but at the same time she is very excited and happy for me.

JB: I was a tomboy. All I did was hang out and I rode dirt bikes and horses and played football and baseball with the guys pretty much most of the time.

JB: Well like I said I grew up riding all my life. I rode rodeos and then I got involved in English and jumping. However, it was a childhood dream to become a jockey, but I was never near a race track. When I went to college in Southern California I met a girl who was involved in the 2 year old sales and she worked for a Bloodstock agent and asked me if I would like to help with one of the sales. So I started helping at the 2 year old sales and I did that for about a year. I was on the ground working with the horses and I wanted to start riding. From there on I was sure I wanted to become a jockey. I started galloping at Pomona Racetrack and then I went to Santa Anita and I worked for Randy Bradshaw. From there I moved to New York and became a jockey.

FOTH: Were you taught anything as far as riding goes? Did anybody help you out?

JB: Not really. I had a few jockey friends that helped me along the way before I became a jockey. Then when I was riding in Kentucky, Willie Martinez helped me quite a bit on the Equisizer (this is a wooden horse young jockeys use to become familiar with race horses)

FOTH: Tell us all about what you remember about your 1st race.

JB: My 1st race was at Belmont Park. I actually was supposed to wait for Aqueduct to open up, but he was ready and the race came up. The trainer's name was Mary Ellis Coffy. The horse's name was Brazen Memories. We won the race. We beat Jorge (Chop Chop) Chavez, who was on the favorite. The horse paid $131.00 to win. I was in the one hole and pretty much went to the lead. Everytime Chop Chop whipped my horse went faster It was a time I will never forget. Newspapers all around doing interviews, etc. The purse was $41,000.

FOTH: Were you nervous at all in the gate?

JB: Yes I was very nervous in the gate. I had Jerry Bailey on one side of me and Chop Chop on the other. It was a little intimidating. You want to look and do good and try not to make any mistakes.

FOTH: Did you get creamed after the win and did you know it was coming?

JB: They got me with raw eggs. They smashed them on my head. Baby powder, buckets of water and all the guys from New York, Aaron Gryder, Mike Luzzi, etc. It was fun and the pictures were great. I walked down the hall and I didn't even know it was coming. It was a lot of fun.

JB: I started probably too soon. I wasn't ready to start riding races, but I was a little anxious and I was older for a "bug" rider so I wanted to get going. Probably never should have started at Aqueduct. I should have started at a smaller track, but I learned a lot in New York. The riders are great and very patient and taught me to be a patient rider, to sit and finish up those last 3/8ths of a mile. I think I was a good apprentice rider. I was a smart rider, but I'm definitely a better journeyman. I always had a good sense of pace. I know when my horses were comfortable.

FOTH: What are some memories you have as a "bug" rider?

JB: A lot of traveling and injuries. I had 3 kind of freak injuries in a row. That unfortunately is my memory of being a "bug" rider. I was kicked at Garden State after the race by a pony horse. When I was riding her at Delaware I had a horse in the post parade kick me and break my cheekbone so I was out 3 months with that. I then moved down to Kentucky and I got going and I was riding at Churchill Downs less that 2 weeks and I picked up a horse down there and the horse went down and I broke my wrist. 3 injuries close together that was tough mentally to keep coming back from those injuries. However I did very well at Turfway that year. That was probably my best memory. I won about 71 races in about 3 months and I was 2nd leading rider.

FOTH: Do you feel female riders do not get the respect they deserve?

JB: No I don't think we get the respect we deserve. I still think females are underrated a little bit. I think we are better riders that people give us credit for. I think trainers are starting to ride more females jockeys realizing most of them can ride just as good as the guys.

FOTH: Any other female jockeys you admire?

JB: I admire all female jockeys. I think it is a very tough atmosphere to be in cause it is a male dominated sport. It is challenge mentally as well as physically, Females work twice as hard and don't ride as many horses. I admire any female jockey.

FOTH: What advice would you give to a young girl who wants to be a jockey?

JB: I would say go for it. Follow your dreams it is wonderful.

JB: I would like to ride as long as I am healthy, doing well and happy. I don't put a time limit on it.

FOTH: Any track you would like to ride at one day?

JB: Arlington and Santa Anita. I started galloping at Santa Anita, but I never rode a race there.

FOTH; Do you have a favorite horse or trainer you like to ride for?

JB: My favorite horse is a filly I rode called "Love Talkin". I won a few races at Churchill Downs on her and I broke her maiden and won an allowance race. Also "Sir Cherokee" who was gonna be in the derby. I broke his maiden at Keeneland. I really enjoyed riding for Mike Thomlenson. Mike gave me some great opportunities and I loved his horses.

JB: I wake up about 5am and go to the track and breeze horses that you have set up from the day before. You talk to trainers and your agent and try to get as much business as you can. Try to go to every barn and set up some mounts for racing. Then I go home and have breakfast and take my dogs for a walk and then head over to the jock's room and I am usually there all day.

FOTH: Do you have anything you like to do when you are away from the track?

JB: It was when I got hurt so it wasn't a great time, but I did do well there as a "bug" rider. Whenever I went over there to ride I usually did very well. Of course I remember getting that picture with you (laughs)

FOTH: Thanks for the interview. Any last words?

JB: I think it is very nice that the two of you are doing this website on the internet. I hope young girls are reading it and will be inspired and more knowledgeable about this sport.