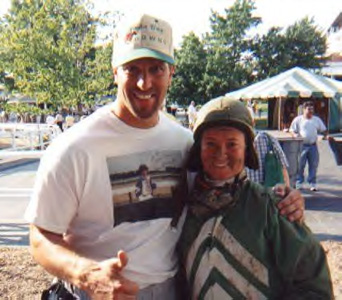 Chris and Jennifer up at Monmouth in 2001

I met Jennifer once at Monmouth Park (see photo) and that was right around the time of the creation of this website. I lost touch of where Jennifer was at until I saw her riding at Emerald Downs on TVG. A few phone calls later and here is the interview I did with her:

JW: I was born in Seattle, Washington. I grew in a little town called Stomish.

FOTH: What sort of girl were you growing up? Were you a tomboy like most of the other female riders I have spoken to?

JW: Totally for sure. Outside, horses, the whole bit.

FOTH: Do you have any brothers or sisters and if you do, what do they think and your parents think about you being a jockey?

JW: We that is an interesting one cause I have 2 sisters that are older and a brother that is older, he is deceased now, they are all 4 years apart. My oldest sister actually broke her neck at Hollywood Park while working a horse. They were kinda hesitant at first, but now they love it now. They are happy I am doing it and I have very supportive parents.

FOTH: Did you know at a young age you wanted to become a jockey or was being a jockey the farthest thing from your mind?

JW: No it just kinda evolved. You know when my sister was doing it and I grew up around the track. My parents had race horses when I was really young and stuff, but there was school and stuff. My sister ended up getting hurt right around the time I would have started learning to gallop. So that kinda lead me away from that and I started doing different other things and I ended up not galloping horses till I was 18. I started a little late.

FOTH: How is your sister doing today?

JW: She is paralyzed from the waist down.

JW: She has had 3 kids since the accident and I'll tell you what, she is stronger than me to have 3 kids after all that.

FOTH: What event or events actually then led to you becoming a jockey?

JW: Well once I started galloping, which I ended up doing a long time and I dated this guy named Van Velhour and he rode for a little while and I was dating him when he was a good jockey and he really didn't want his girlfriend riding horses and I was with him up until the time I started riding and I just sort of jumped into being a jockey after that.

FOTH: Tell me what you can remember about your 1st race?

JW: It was fast. I didn't think I was nervous, but now I look back and realize I was. I remember it was muddy out and I think it was raining and it was Easter Sunday in the year 2000 and I had an injury posted against me. I was on a filly I couldn't whip and the stewards called me in for that. They told me if I had a whip in my hand I should be using it and I told them the trainer told me not too. This was at Emerald Downs.

FOTH: Tell us about your 1st win. Was that at Emerald Downs?

JW: Yes it was and it was on a horse named 'Hot Spicy Do" and it was for a trainer named Howard, who I basically just ride for now. She was a nice filly and she only ran like 5 or 6 times before she retired.

FOTH: Did you win by a lot or was it in a photo?

FOTH: What was it like jogging the horse back to the winner's circle?

FOTH Did you get the initiation after the race and did you know it was coming?

JW: Yeah I knew it was coming, but I had forgotten all about it. It was muddy out so I was already a mess. (laughs)

FOTH: What other tracks have you rode at besides Monmouth Park and Emerald Downs?

JW: I have rode at Portland Meadows, Golden Gate and that is about it.

FOTH: For those like me who have never been there describe a little bit about Emerald Downs.

JW: The track just opened about 3 weekend's ago and we have been getting decent crowds and the handle has been good. When they go giveaways and stuff things are decent and they tried racing on Mondays and that didn't do good. It is a nice place cause you can bring your kids cause they have pony rides and stuff and when it is nice out it is great to look at as you have the mountains as a back round.

FOTH: Do the girls get a pretty fair shake there as far as getting mounts and stuff?

JW: I just ride for one trainer and I gallop for him and help him around the stalls and stuff, but the girls do pretty good. Katie Repp is riding 3 to 6 horses a card, which is good for a girl rider. They treat the girls here really well.

FOTH: Now I know you rode for one summer out here at Monmouth Park, how did that come about?

JW: Joey Dangelo an agent up there gave me a call and I loved it there and they didn't know me and they don't see our races here so it was pretty much sight unseen. I went out there and I didn't ride much and unless you get on the good ones right off and do pretty good right away, you not gonna get a fair shake. I loved the track and stuff it was nice.

FOTH: Do you know how much longer you would like to ride for or do you pretty much take things day by day now?

JW: I take things day by day any and I'll work till I can't work no more.

FOTH: If some young girl came up to you and said she wanted to be a jockey, what advice would you give her?

JW: I would tell her to take her time and make sure she is polished and ready before she starts, they is a big mistake people make. You can't get enough experience to do what we do. It is never gonna be enough to teach you what you need to know. Riding is riding and galloping and working horses is another. All the experience you can get from people is great and listen and learn what people tell ya.

FOTH: What sort of injuries have you had and what was the worst one?

JW: I broke a collarbone and separated a shoulder. Nothing really tragic. My ribs took the longest to heal, that took 6 months. Nothing has been too bad.

FOTH: Take us what you go through in a typical day.

FOTH: Any hobbies or things you like to do when your away from the track?

JW: I sleep a lot. (we both laugh) I sleep a lot cause I work everyday. I usually go to my mom and dad's house and hang around with the dog and just hang out. I'll go to the movies or go miniature golfing.

FOTH: Do you think another girl can win a Triple Crown Race?

JW: I don't see why not. I think that would be great.

JW: That is a loaded question. (laughs) I would make the horses sounder and I do love it the way it is, but I think horses are run too much and too long nowadays and I think there is a little too much medication. I would love the track surfaces to be perfect. In general I love the sport.

FOTH: So you think the rest of your life you'll still be involved in horse racing.

JW: I think so. I love the sport, but I am thinking about going back to school.

FOTH: I am out of questions. Anything you want to add or say? It was great finally interviewing you after all this time.

JW: No, just thanks very much for getting in touch with me and wanting to do an interview with me.