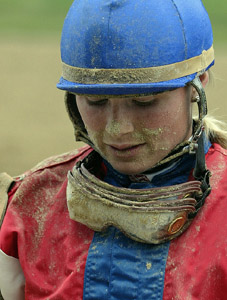 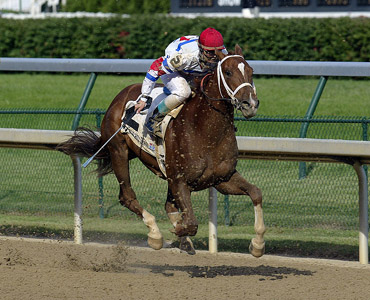 Jordan Charkoudian rides out in the Kentucky area and I got her on the phone recently for this chat and here is what Jordan had to say to my questions:

JC: I was born in upstate New York in a town called Kinderhook. I was born and raised there till I am came down to Kentucky.

JC: I have 1 younger sister?

FOTH: What do your parents and your sister think about you being a jockey?

JC: They love it and everybody has been very supportive. FOTH; Have the ever had a chance to see you race live?

JC: My 1st race at Churchill Downs they all came down and surprised me and saw me ride my first race there.

FOTH: When you were a young girl growing up, were you a tomboy like most of the other female riders?

JC: I wasn't a tomboy, I just rode and took dance lessons.

FOTH: Did you know at a young age you wanted to become a female rider or was that like the farthest thing from your mind?

JC: No I was into the hunter jumpers and show horses. I did get into the thoroughbreds until college.

FOTH: Did it feel natural getting up on a horse and stuff?

JC: Oh yeah. I had been riding for so long.

FOTH: Did you notice a big difference in getting up on a thoroughbred horse for the 1st time?

JC: Yeah there is a difference.

FOTH: Did you have anybody teach you how to ride or did you learn a lot on your own?

JC: I took Equestrian and I took lessons and all that stuff growing up.

FOTH: You said you grew up in upstate NY. Did you ever get a chance to go to Finger Lakes or Saratoga while you were there?

JC: I started galloping at Finger Lakes and we always went to Saratoga every summer.

FOTH: What made you make the move down to Kentucky?

JC: My husband at the time got a job at the Thoroughbred Times so we moved here.

FOTH: Did you go to Churchill Downs at all before you began riding?

JC: Just galloping. I was galloping at Churchill and Keeneland and I was able to ride my 1st race at Churchill.

FOTH: When you were galloping, did you know then that you wanted to become a jockey?

JC: Yeah. As soon as I started galloping I knew I wanted to race ride.

FOTH: Tell us about your 1st race and were you nervous at all?

JC: You know I wasn't. I was more excited than anything. The horse's name was "Untamed" and it was for trainer George Mcarty and I think it was one of the last races of the day, so I had to sit around and wait, but being at Churchill Downs, it was pretty amazing.

FOTH: Is the jockey colony at Churchill Downs pretty tight knit and were they helpful towards you at all?

JC: They have some of the best riders there and everyone has been very helpful towards me everywhere I have been, Tampa Bay Downs, Belmont, Churchill Downs.

FOTH: What do you think of the recent retirement of Pat Day?

JC: It is sad and the end of the era. There will never be another Pat Day. At least he is walking away healthy and it was his decision and that's important.

FOTH: Where was your 1st win.

FOTH: What made you decide to leave the Kentucky area and go ride down at Tampa Bay Downs?

JC: Well, Richard Depass, who is a jockey agent set me up with another jockey agent at Tampa and he said that would be the best spot for me to get going and that I would be able to ride a lot.

FOTH: Did you notice a big difference riding at Tampa?

JC: It is very different. The horses and the riders. You can learn a lot from getting on the lesser class of horses too.

FOTH: Your 1st win, did you win by a lot or was it close?

JC: The horse went wire to wire and I won by like 2 or 3 lengths.

FOTH: What was it like galloping back to the winner's circle for the 1st time?

JC: It was pretty amazing. I couldn't stop smiling. It was defiantly an achievement.

FOTH: Did you get pelted with stuff after the race?

JC: I got water buckets and eggs, the whole thing.

JC: I knew, but I pretty much forgot and wasn't ready for it.

FOTH: DO the trainers down at Churchill Downs, are they pretty open to using female riders much?

FOTH: So your doing the Kentucky circuit now.

JC: Yeah I'll do Ellis Park and Turfway Park and then I'll go back down to Tampa Bay Downs.

FOTH: Do you feel with each race that your improving as a rider?

JC: I hope so. I can feel the difference and I am getting stronger and trying to think better and finishing stronger, that is what I have to work on.

FOTH: Do you mind riding in the colder weather?

JC: I hate the cold that is why I am going to Tampa. (we both chuckle) I grew up in upstate New York and I have had enough of the cold weather.

JC: As long as I am able to ride that is what I want to do.

FOTH: What are some of the other riders your friends with?

JC: Patricia Cooksley helped me out a lot. Donna Barton gave me a lot of help too.

FOTH: If some young girl told you she wanted to become a jockey like you, what advice would you give her?

JC: I would tell her it is a long road and it tough and you will need a lot of determination. You will pay your dues and she should gallop a long time before she starts race riding.

FOTH: Do you think another female besides Julie Krone will win one of the Triple Crown Races?

FOTH: Do you have any fear of injury?

JC: I get to the track between 5;30 am and 6:00 am and walk around and work horses and that keeps me busy all morning and after that if I can I'll go home and take a short nap and then go to the jock's room and I hope to have 4 or 5 mounts that day. If it is a dark day (that means no live racing-chris) I'll go run 4 or 5 miles and then I am in bed early. (laughs)

FOTH: Do you have any hobbies or things you do away from the track? What do you do to relax?

JC: I got to gallop at Saratoga and I'd love to ride a race there and also Delmar.

FOTH: Do you have any problems with weight?

JC: I am lucky and if I eat healthy I stay right around 105.

FOTH: When you get to the jock's room do you look at the racing form and stuff or do you pretty much what the trainer tells you to do?

JC: I always get a form and look at it to see where the horse should be during the race and see who I should follow or be in the front and try to figure it out before I get out there.

FOTH: Jordan I am out of questions, anything you want to say to wrap this up?

JC: I don't think so, just thanks for the interview.