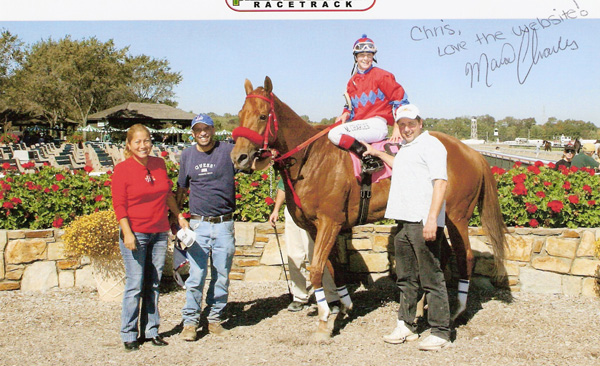 Maria Charles is a jockey I know quite well and I interviewed when she was an apprentice rider a few years back, so I thought it would be a good idea to see what she is up too and I got her on the phone and here is what was said:

FOTH: Anything you want to say to start off this interview?

MC: I am in love with Chris Forbes. (laughter from Maria)

MC: I had a very good apprentice year, except for the times being hurt.

FOTH: Making the transition to journeyman jockey is not easy for some, but you have seemed to have done pretty well as I see your still riding at least a few races per day at Phila Park.


FOTH: With the influx of purses going up at Phila due to the recent casino being up and running do you see yourself staying at Phila Park?


FOTH: I know you have had a couple bad spills and all, tell me about some of the injuries you have had so far.


MC: I had a broken collarbone and I also broke my foot in the starting gate.


FOTH: Did you have to go through any type of rehab for any of those 2 injuries?


MC: I had to go through for my collarbone and I had to start all over again with my broken foot.


FOTH: I know you recently went down to the West Indies in Jamaica to ride. How did that come about?


MC: That came about from Herold Whylie one of the trainers over at Philadelphia Park.


FOTH: What exactly did you do down there? Did a bunch of jockeys from out of town come in and ride sort of like a jockey challenge type of thing?


MC: They had a jockey challenge down there and it was actually 6 out of town riders and the rest was their riders and there was 5 races and you just picked at random which horses you rode, I am not sure who won it, but I didn't do to good, but a bunch of my horses ran good, I had a 2nd and a 3rd.


FOTH: Are the horses a lot different down there as opposed to up here in the states?


MC: They are a lot different and they can't use any medication down there at all. They have nothing for down the lane. (laughs)


FOTH: As far as the crowd goes, was there a lot of people there attendance wise?


FOTH: Wow. I know there was a girl from Canada that also rode, is there any female jockeys down there or is it all men?


MC: It is all male. There are no female riders and the reason they got a lot of people there was due to the fact that they had female riders competing in the races.


FOTH: Do you have a favorite moment or day being a jockey so far?


MC: I get attached to some horses and I like to see when they do well, but there is a lot of them, more than I can name.


FOTH: Now I notice you do the thumbs up on a horse if you win a race. Is that for me or for your mother?


MC: It is for both. (laughs) It is for my mom, but I know you like it too and that's for you too. (major laughter from both of us)


FOTH: I know your mom is a horse owner as well. Have you had a chance to ride any of the horses that she owns or are you planning on it soon?


FOTH: Does she come out at Phila Park much to see you ride?


MC: She comes out when she can. She watches me every day on the computer, my every race.


FOTH: Do you still feel your improving as a rider?


FOTH: Have you been over to the casino part of the track yet?


FOTH: About how many horses do you get on in the morning now?


FOTH: Does it ever get to be a grind for you and want to take a break or are you into it full out every day?


MC: I do love it, but every now and then I need a break.


FOTH: I know there is a lot of females now riding at Phila Park. Do all the girls for the most part get along with each other?


MC: We all pretty much get along and the ones we don't like you already know of that.


FOTH: Have you ever won any stake races in your riding career?


MC: Yes I have 3 Grade 1 stake races at Delaware Park with the Arabians.


FOTH: Do you have to prepare to ride those horses differently that a thoroughbred as they are a bit slower.


MC: Yes, but the ones I am on they are nice and yeah they are different, but not the ones that I ride. Obviously they are a bit slower, but they are really nice.


FOTH: How do you prepare to ride a race. Do you look at the racing form or do you wait and listen to what the trainer says in the paddock to you before the race?


MC: I look at the form and I look over all the other horses and you get an idea and then when I get out into the paddock I listen to the trainer also.


FOTH: I know sometimes you have plans on what you want to do and sometimes you have to throw them out the window as the race unveils. Have you ever been yelled at by the trainer for doing something that wasn't in the game plan so to speak.


FOTH: Have you ever had to make any split second decisions when say like a horse went down in front of you?


MC: That actually happened to me when I was on a horse for Armand Correnti.


FOTH: Is that the time that you almost went over the rail?


FOTH: You didn't get hurt that day?


MC: No. (I saw the race and it was a very scary moment and I was glad Maria didn't get hurt-chris)


FOTH: When you are in the starting gate do you ever have any fear of injury or do you just block that out of your mind?


MC: I just block it out and I think when you get to the point that you get scared you should just quit.


FOTH: Ok Maria I would just like to thank you once again for another interview and anything you want to say to wrap this up.


MC: No Chris just thanks for letting me part of your website.


FOTH: Anytime Maria and I'll see you around.