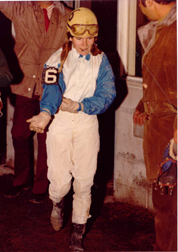 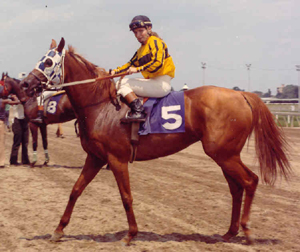 Here is an interview I did with retired jockey Patty Head, who rode in the 70's when it was much tougher for female riders to be accpeted. Hope you enjoy the interview

FOTH:: Where were you born and where did you grow up?

PH: I was born in Hamilton, Ont. and raised in Lachine, Quebec.

FOTH:: Do you have any brothers or sisters and what do they think of you when you were riding?

PH: I have an older sister and 2 younger brothers. I grew up in apartments and kept my horse in my bedroom. His name was Silver, just like the Lone Ranger, and I was the only one who could actually see him. I rode my invisible horse everywhere and would send him to pick my mother up at work. My whole family went along with it thinking I'd eventually grow out of it. Little did they know!

FOTH:: Tell us a bit about your first riding experience and how you got started riding.

PH: When I graduated from high school at 17, my only experience in the saddle was a few rides at a rental stable. I convinced the owner that I knew how to ride and she put me on a little brown mare named Fireball. When we came to the first stretch of trail where the horses were turned loose, Fireball was in the lead. I lost my stirrups and grabbed mane but when she pulled up, I was still in the saddle. All those years with Silver had paid off--and I was hooked on galloping. This was the late 60's and women hadn't broken into the jockeys room yet but in '69, Kathy Kusner took the racing commission to court and won--a major win for all women. I was at college working on a diploma in Phys. Ed. but more importantly, I'd found Green Acres Riding Academy and took a lesson a week. I set a goal: within 6 months I'd outride the 14 year olds, who could ride circles around me at that point. Well, 5 1/2 months later I rode in my first show at Green Acres and they put me in the junior class when they needed an extra rider (I looked like a junior at 5' and 100 lbs.) I won. First goal achieved! The road to getting my jockeys license was a tough one. In '70, trainers weren't inclined to train women for racing. Once again, I used my natural acting ability to convince trainers I knew what I was doing. I watched the exercise riders at the different training centers and copied what they did. My natural sense of balance saved my life many times but I credit my trust and communication with horses as the main reason that I'm still alive today. The first time I ever broke out of the gate was the day I rode before the stewards to get my apprentice license. That was '73, the year Secretariat won the triple crown and Paddy Head got her jockey license.

FOTH:: Tell us what you remember about your 1st race.

PH: My first race was at Blue Bonnets in Montreal on a mare called Check Carefully, and the betters were, believe me. It was only my second time out of the gate, only a blur as this mare was loaded last and the latches opened as we were walking in. I was in front all the way until the last few strides. Three horses rushed me at the wire and I finished 4th beaten a length. I remember putting a white pompom on my helmet cover so I'd be able to see myself in the replay and watch every stride. My butt was sticking up so high in the air it must have been the wind resistance that tired the horse out. I ripped that pompom off and went to work on my style.

FOTH:: Take us through your riding career. From Blue Bonnets I went to New England. Suffolk Downs was my home base, where I rode during the day, and Narragansett Park at night. Narragansett was the roughest and most crooked racetrack going. The games that went on there! I rode one winter at Penn National where it was so cold our hands and feet were numb by the time we got to the gate. How we steered the horses around safely I'll never know. In '79, I came out West to BC. I still rode mostly in the US at Long Acres and Yakima and then rode my final race at Assiniboia in Manitoba.

FOTH:: What was your proudest moment as a jockey?

PH: One of my proudest moments as a jockey was my final win at Suffolk Downs. The trainer was one I highly respected but he hadn't used me because his sponsor didn't agree with women jockeys. He came to tell me he had a mount for me. At this point, I had a reputation for handling nervous horses and getting them settled. I knew immediately who he was referring to--Flying Voyage. The colt would open up 20 lengths out of the gate and die half way down the stretch. I planned every stride of that 6 furlong race. I settled him 18 lengths in front and waited for the field to catch me. They came at me right at the wire, just like in my first race, but this time it was my nose in front at the wire.

FOTH:: What sort of injuries did you have over the years?

PH: I had several injuries in my first year of racing, a broken leg and many broken fingers, which was why it took me a full year to win my first race. (The first win came on a horse I'd never seen before, Test Red, and on a course neither of us had ever been on, the turf course at Suffolk.) I was involved in a 5 horse spill at Narragansett and suffered a concussion and broken collarbone. My severest injuries have happened since I retired from racing and got into eventing and showjumping.

PH: There are many interesting and funny stories to tell but I'll pick one. I was riding a longshot at Suffolk and was so far out of it I wasn't even getting dirt in my face. As I came into the final turn, I saw my friend, Suzie Pye just ahead of me. I decided I would try to encourage both of our horses and as I drew up alongside her, I let out a holler. The only one who responded was Suzie, who almost fell off. She was so far behind the pack, she thought she was last.

FOTH:: What advice would you give to any female who wants to become a jockey?

PH: To women who want to become jockeys today, I'd suggest you train either at a jockey school or with a good trainer. If you happen to have grown up with an invisible horse and know how to intuitively communicate with horses, have superb balance and unshakable perseverance, then you can work your own way in. Read books about jockeys and great racehorses and watch movies like Seabiscuit to be inspired, especially on those down days. And like Red Pollard said to the Biscuit, Don't ever give up!

FOTH:: Do you still ride at all, not professionally I mean.

PH: Today, I ride for pleasure, What a wonderful feeling! I have several horses that my partner and I bred and raised from our best race mare, Buffy's Magic. Princhessa is a TB/Dutch WB who is just amazing. Aphra Behn is an elegant TB mare who turned 2 the year I retired and never raced. I hope to ride till the end, even if I have to bring Silver back out. I used to write as a hobby during my racing years, a way of going out into other worlds without actually leaving the backstretch. Now writing is my career and horses my hobby. My first published novel is due Sept. 1/05, Majeek.

FOTH:: Any final words to wrap this up?

PH: Please go to www.majeek.com and check us out. I would love to hear comments and reviews from other women jockeys. I'd love to offer advice and support to all women in the racing business or just breaking in. Best of luck to you all!