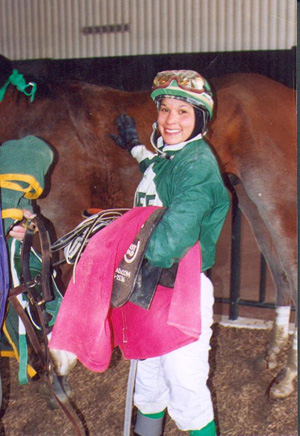 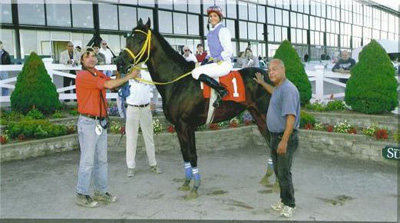 Raina Paucar is a jockey I got to know a bit at Phila Park when she rode there and she then went out to Ohio to ride and I thought it was time to find out what she has been up too the past few years so I emailed her an interview and here is what she said:

FOTH: This is our 2nd interview so I am not going to get into your whole riding career. What made you make the move from PA to riding out in Ohio and how has the whole experience been for you?

RP: I first went to Suffolk Downs for a couple months because I wanted to be closer to my family and try a new track. I was also dating Edgar at the time (who is now my husband). I came to Ohio with him primarily because he thought he could do well here and he has been leading rider in Ohio since.

FOTH: Looking back, do you think becoming a jockey was harder or easier than you thought it would be and why?

RP: I didn't have any expectations as to how hard it would be. I only knew I was going to do this. I will say though I didn't realize the commitment and responsibility it takes to be optimally fit and strong. I didn't bargain for galloping as many as 8-10 horses in the morning and then getting ready to ride races in the afternoon.

FOTH: I know you got married not to long ago. How did he pop the question and were you surprised that he did it?

RP: I wasn't surprised that he asked me because I had already had our twin boys and we have a solid relationship. I don't remember how he asked me. It just wasn't important to me.

FOTH: Have you ridden at all 3 of the Ohio tracks and what is your opinion of Beulah Park and what do you think can be done to make it better?

RP: I ride mostly at Beulah and I did ride a few races at River Downs never Thistledown. As far as making Beulah Park better I'd say replace the surface of the track with something better (and a lot of other maintenance issues). Ohio racing in general desperately needs slots.

FOTH: Have you ever met the Beulah Twins and if what do you think of them?

RP: I have never met them personally but they seem like fun girls.

FOTH: Tell me about this business you have started. Do you have a website and what exactly are you selling, etc?

RP: I am selling skincare and nutritional products. I also teach and train others to do what I am doing. Arbonne is a way for me to be healthy in the things I'm putting on and in my body as well as what I use for my kids on a day to day basis while being a vehicle for me to create financial freedom for my family. I am making money through Arbonne even while I sit here in this interview with you, and I'm not the only one. There's a little over a million of us using the Arbonne skin care which is botanically based, meaning there are no toxins, carcinogens, animal rendering or mineral oil and people notice a difference within days of using, as well as weight loss and nutrition that's 100% Vegan, high in fiber and vegetable protein. There's aromatherapy and even makeup, but Arbonne is most known for it's anti-aging products. I was really blown away when I realized about a year ago the harmful ingredients in most of the personal care items I was using on myself and my kids everyday. The more I found out, the more passionate I got about it, and I'm meeting other's, especially mom's who feel the same way I do. And Arbonne is making it possible for me to go after my dreams, which is to buy a farm in Kentucky and save horses that would otherwise be euthanized. My website is:

FOTH: I know you just got to riding after a layoff. How much longer to you think you will ride for and was it tough getting back into riding shape?

RP: I'm not sure how much longer I will ride races. It does take a lot to get back into that racing fitness, mind and body. If you have your mind on what your goals are you won't be swayed.

FOTH: What are some of your memories from Phila Park?

RP: I have several good memories. Of course the races I won. Mostly everything I learned at that time not just racing but life in general. I got to learn what I was made of.

FOTH: If asked, would you ever go out to Hoosier Park and compete in their annual Female Jockey Challenge?

FOTH: Do you feel during your riding career that you have had to prove yourself over and over being that you are a female rider?

RP: Not because I am female. *Every* rider has to prove themselves over and over, every race every day.

FOTH: What are some of the injuries that you have had and what was the worst one?

RP: Back injuries which I still have and always will...enough said

FOTH: Is there any days that stick out in your mind, like winning 3 races in a day or bringing in a 50-1 shot, etc?

RP: I won 3 races at Penn National that was the best night ever. I remember I couldn't sleep that night because I didn't want that moment to end.

FOTH: If a young girl came up to you and said she wanted to be a jockey, what advice would you give her?

RP: That's a loaded question. I'd say first go to school and have a back up plan for your finances to build a solid future. If you have that burning passion to race then go for it with no regrets because saying I wish I did but I did not is the worst thought to have hanging around in your mind. I would say train aggressively with weights, eat well and have a strong mind with tunnel vision on your goals. I would strongly suggest whatever you make in your apprentice year that you save and invest it wisely.

FOTH: Do you plan on pretty much staying in the Ohio area or if the tracks don't improve as far as purses go, you might move somewhere else?

RP: I am an entrepreneur with my own business in health and wellness. Once I have established more passive income I intend to have a farm in Kentucky where I can retrain and rehab ex-racehorses. I love Ohio but it seems it will take a miracle to save racing.

RP: No. I didn't have total confidence in myself at the time. I had negative people in my life at the time and didn't give myself that disciplined lifestyle being a great apprentice rider requires. Live and learn.

RP: I get up at 6 am or so. Make some breakfast for my boys, get ready to gallop. I'm on my first horse by 7:15 I finish up around 10:00 go to the gym and work out. Make lunch, lay my boys down for a nap and work my business for a few hours (presentations, phone calls, trainings). If I ride that day I'll go to the jocks room. If I'm not riding that day I'll watch the races to see how Edgar is doing. We have dinner and take the boys somewhere to play, come home and call it a day and wake up to a new one.

FOTH: Does riding in the cold both you or your husband at all or do you just bundle up and go do what you got to do?

RP: We don't enjoy the cold but we have to live with it and deal with winter and what comes with that (misery) lol.

FOTH: What are some things you like to do when you are away from horse related stuff?

RP: I love acting and I do that on occasion. I like to be with my family and see my boys laughing and having fun.

FOTH: Do you have a favorite and least favorite track that you have rode at and is there any track you would love to ride at one day?

RP: No least favorite. I would love to ride in Saratoga again now that I know what I'm doing.

RP: I Work out with weights and my equicizer. Watch what other riders are doing in races. Checking out where horses are winning from (where the track is good) and making a strategy based on that. Anyone who rides at Beulah knows you never know where it's good from day to day. Then practice some yoga, mediation, eating well.

FOTH: Do you think after you retire that you will stay involved in horse racing?

RP: I will stay involved as my husband is a jockey who has goals with his career. So I am supportive and understanding of that. I will help retired racehorses as I am passionate about that.

FOTH: Raina I am out of questions. Thumbs up for the 2nd interview and any last words you want to say the floor is yours.

RP: I acknowledge and support your website for all the positive interest it brings to female jockeys. Thanks for giving female riders a voice. All the best.