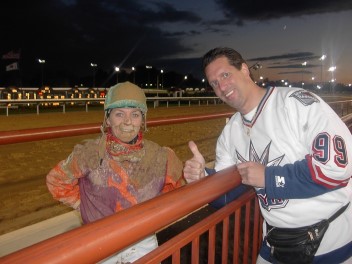 SC: I was born in Fayetteville, NC, which is near Fort Bragg, NC, which is where my dad worked and was stationed at the time. I grew mostly in North Carolina as we moved around a couple times and then we went to Virginia where I started 9th grade there and finished high school in Virginia.

FOTH: Do you have any brother or sisters?

SC: Yes, they are all half brothers and sisters. I am the only child between the parents.

FOTH: What do you parents think of you being a jockey?

SC: They don't like it. (laughs) Nobody in my family likes it that I know of.

SC: I was a tomboy. I played football and stuff like that with the guys.

FOTH: Growing up was becoming a jockey something you wanted to do or was it something that was the farthest thing from your mind?

SC: No, my mom pretty much said I was born riding a horse. It was always a dream of mine, a distant goal. It was always in the back of my mind. I had gone to nursing school and stuff like that. When I had the opportunity to become a jockey I did. My dream was right there in front of me so I completed my dream.

FOTH: What sort of event or events actually led to you becoming a jockey?

SC: I guess it was when I got my trainer's license down at Colonial Downs and I was thinking about riding this and that and the other. I had been galloping horses 15-20 years so I said I guess I am gonna do it cause I had been breaking horses out of the gate and stuff.

FOTH: Does it feel natural for you getting up and horses and all that?

SC: Oh yeah, it is just like getting in a car and driving it.

FOTH: Tell us a little bit about your 1st race.

SC: I fell off afterwards. (we both laugh). I was right beside Ryan F. and after the race the horse ducked in and I fell off.

SC: Laurel. Actually Ryan came by me after I was boot back on he said 'don't give up, I can tell your a natural at this, I can tell and I hope to see you back at Laurel."

FOTH: Tell us about your 1st win?

SC: I can't even remember the horse's name now. We won fairly easy.

FOTH: What track was this at? Was it at Charlestown?

SC: Yes. I love Charlestown. I am used to being on a small track anyway. That is all I galloped on except when I would go to Laurel or Colonial Downs. I was used to the small circles and tight turns and there isn't a lot of room.

FOTH: Did they get you after the race?

SC: Yeah, they got me. Not as bad as some. They keep it down for the girls. They said they are gonna pay me back when I win my 1st stakes race.

FOTH: What other tracks have you rode at besides Colonial, Laurel and Charlestown?

SC: I have rode at Pimlicio and Penn National. Charlestown has been my main track and I love the guys I ride with.

SC: Till I can't ride no more. I just love to ride.

FOTH: Do you think a female rider will ever win the Kentucky Derby?

SC: I want to ride in the Derby. I will do that and that is been one of my dreams since I was 5 years old ever since I was watching the Derby with my mom and dad. They didn't even know what the Derby was and I told them that will be me one day. I saw my godparents I saw them for the 1st time since I had my daughter and I told them I was in the process of becoming a jockey and it freaked them out cause all they could remember was me riding my bike as a little girl pretending it was a racehorses and I was racing everybody in the neighborhood.

FOTH: How are the trainers down there as far as female riders go?

SC: Most wait and see what caliber of girl you are. Whether your one of the prissy ones or one of the rugged ones. To me, you have to be rugged in this business. I think they want to see what type of rider your are.

FOTH: I know your out of action right now with a collarbone injury. How did that happen?

SC: It was due to the track conditions and it cause a horse to go down. The track was maybe 2 inches deep of water and under that, you know when dig in and go underneath those 2 inches, it was real cuppy. The horse got so exhausted from the cuppiness and she just passed out.

SC: (laughs) I ride all the time. I take care of my pony. I ride my pony and I actually have to do things that stimulates my mind cause I get bored easy. I work out at the gym. I used to do kick boxing I'm thinking about getting back into that. Mountain climbing too.

FOTH: Take us through a typical day.

FOTH: If a young girl came up to you and wanted to become a jockey, what advise would you give her?

SC: It is tough out there, so you need to be tougher than they are. If you stay tough you can make it.

FOTH: Is there any female jockeys or female athletes that you admire?

SC: I don't watch too much sports, but they might not be athletes, but I admire Julia Roberts, Meg Regan. I had a friend who needed a lung transplant and I would start ridsing for him cause he always wanted to be a jockey and obviously he couldn't be one. I don't talk about this a lot and I get really emotional when I talk about him and he is a really good friend and I thought he was gonna die, but he got his lung transplant now and I ate lunch with him not too long ago. I'd love to do a feature race with him, maybe at Colonial Downs.

FOTH: Have you ever gone over to the slot machine at Charlestown?

FOTH: Is there any trackS you would like to go ride at one day?

FOTH: Is there any one day that sticks out in your mind as far as race riding goes?

SC: Winning 4 races in one day was one of them. I won 3 of them for the same groom. After we won the 1st one I was in the paddock and I was asking him if I won this next race could I buy pizza for the barn and he said no, cause I got one more in. He said if I win that one I can buy pizza for the barn and I won that one and the barn got pizza. The groom had never had 3 wins in one night. It is something he never got to experience and I was glad to do that for him.

FOTH: Is the injury you have no your worst one?

SC: No I had my pelvis broken in 3 different places. They told me I would be out for 8 months and I came back in 4 cause I really wanted to race ride. That was on a horse I was breaking and she flips real bad and she flipped me and rolled all over me and kicked me.

SC: It was harder than I thought it would be and I would not have wanted it any other way. I wanted to experience what a true 'bug' rider goes through. To appreciate and be able to ride, you need to go through all the corrective steps and I didn't wanted anything or any winners handed to me. I wanted to learn just how the guys learn to ride.

FOTH: Do you feel with each race your improving as a jockey?

SC: I would like to think I am improving with each race. I go back and look at each of my races whether I win em or not and I drag one of the guys and ask them to show or tell me what I did wrong.

FOTH: Anything you want to say to wrap this up?

SC: Yeah, my friend I was talking about his name is Chris Crocker. He doesn't get any recognition for anything and he kinda gets embarrassed cause I told him I was gonna do a feature race for him and he got embarrassed and stuff. He is really the one who helped me get started. I brought a saddle from him and told him I would ride the saddle until it broke and I couldn't ride it no more. Trainer Mary Sue and Chris Crocker they are the 2 that pushed me out the door into race riding.

Also Carol Rice helped me out in the beginning. She helped me with my position on a horse, she helped me be stong mentally and physically. She would watch me ride and tell me things I needed to work on. That was the biggest help that anybody did for me. She also helped me set little goals along the way. I wanted to keep people guessing when I walked out into the paddock. How is Campbell going on this horse? Keep me in they back of there minds because I can come from behind or I can lead. Carol helped me achive those goals.

I have a lot of respect for Carol who taught me a lot along the way, along with the guys in the jock's room. Too many to name. I love the guys at Charlestown, we are like family. I also have respect for anybody that rides races. It takes a lot of strength and courage to do what we do. I just wish we got more respect and recognition for doing what we do.