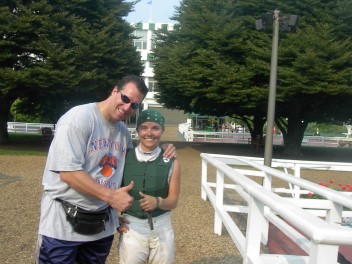 Chris and Stacy up at Monmouth Park.

Stacy Podobinski has been riding for Trainer John Forbes at Monmouth Park and Gulfstream Park. While on a recent trip to Monmouth Park I met Stacy and shortly thereafter we did this interview.

SP: I was born in Princeton, IL and I grew up Eureau, IL.

SP: I have a twin sister and a younger brother.

FOTH: What do they and your sister and brother thing of you being a jockey?

SP: They are very excited and supportive.

FOTH: Have they had a chance to see you ride live?

SP: Only a few times.

FOTH: What sort of girl were you growing up? Were you a tomboy like most of the other female riders?

SP: I would have to say I was a tomboy.

FOTH: Did you know when you were growing up that you wanted to become a jockey or was that something that was the farthest thing from your mind?

SP: I knew I really wanted to ride race horses, but we didn't have thing like that near me, so I didn't know how to get into it. That was the only problem, but I did always want to ride.

FOTH: What actual event or events led to you becoming a jockey?

SP: I moved to Conn. and I was working with a jumper trainer of mine and I realized I wasn't getting any younger and I realized I needed a career to make some money and doing what I do so I decided to try to really be a jockey. I looked for jobs on the racetrack. The only experience I did have with the horses was like Equine stuff. So what I did was I got an interview with the assistant trainer for John Forbes (no relation to me-Chris) and I told him I had never been on a race horse before, but I have a lot of riding experience and to just give me a try. From there they gave me a 2 week shot and put me on horses and they knew I had capabilities and I just needed to change my position and get my body set in the right way so I can actually sit on a thoroughbred.

FOTH: Tell us a little about your 1st race.

SP: It was at Monmouth Park, it was actually a horse I later won my 1st race on at the Meadowlands. I actually had a lot of problems in the gate with her as she is kinda rowdy, but she ended up breaking really good and we were laying 2nd and I ended up finishing 3rd on her. It was a different experience than what I was used too. Nothing compared me to what I was out there doing, you got 6 or 8 horses doing different things at the same time. It was rather exciting though.

FOTH: Were you nervous at all going out into the paddock and during the post parade?

SP: Yeah, I was. I think everyone gets like that and in a way it is good cause it helps you concentrate and perform better.

FOTH: Tell us about your 1st win. I know that was at The Meadowlands.

SP: Yes it was. By the time we got to The Meadowlands I had really gotten to know the horse well and I knew what type of style I should ride on her like if she was a front runner, and she was a front runner and she broke quick and I also knew what little quirks she had and I just took it from there. I managed to win the race and all the jocks doused me with water after the race congratulating me.

FOTH: I was gonna ask you about that. Did you know it was coming?

SP: Yeah I knew it was coming.

SP: It was a very unique experience as I had top jockeys from all over the country there. Just watching them, even if I was not riding in the race, really helped me out a lot. If I had a question I could just go over and ask them and they were all very supportive and helpful in that aspect.

FOTH: I know your riding at Monmouth Park. Any plans to ever come down to Philadelphia Park or Delaware Park during your apprenticeship?

SP: I might start riding down at Phila Park in the winter depending on how things go. Gulfstream Park is pretty tough for a bug rider and even really good bug riders have a hard time down there and your bug year is only good for a year. It all depends, I'll have to talk to John and Pat about it. I don't see why in the future I wouldn't ride there.

FOTH: If some young girl came up to you and said she wanted to be a jockey, what would you say to her?

SP: To work hard and be dedicated to what you want to do.

FOTH: Do you feel so far you have been given a fair shot being a female rider?

SP: Yes, I have. I haven't had any problems. Just learning is always a problem. I don't think I have been treated unfairly in any way.

SP: Going to the beach or staying home and relaxing.

FOTH: Do you think a female rider will ever win a Triple Crown race one day? SP: I hope so. It would be great for a female rider to win one of those races, but there is so few of us and it is hard to get a good mount.

FOTH: Is there any other female riders or athletes that you admire?

SP: Julie Krone. She rode when it was the toughest part of the years to ride here. She rode with the boys and hung in with the best and she actually became one of the best. She would be to be one I think every female jockey would admire. Just the accomplishments she has made. Even in the last year she rode when she retired and then came back and won the Breeder's Cup. It was very exciting.

SP: No, but I do work very hard for the weight to stay down. Once a jock gets his weight down it's not that hard to keep it at a minimum cause you work so hard in the morning and then you work so hard in the afternoon, you just kinda burn it off with all the adrenaline you go through. I usually do a 104 and it's not my favorite thing to do, 105, 106, it is a little bit easier. I just be very careful what I eat.

SP: I get up at 4:30 am and I get to the track by 5;00 am and set my tack. I get on 4 or 5 horses, whatever is on the list for John Forbes and then I walk around on the break with my agent and try to pick up other mounts. I gallop or breeze other horses for other people depending on what is going on that day. I usually sit down in the jock's room and relax, maybe watch some TV and watch some races from NY or Phila Park. I get ready for the race and then look through the racing form before the race and go through with it with my trainer and see what his opinion is and then offer mine and we will talk a little bit about the horse, whether to rate her or go to the lead, whatever she likes to do. I like to listen to music before I go out to get myself a little pumped so when I walk out into the paddock I am focused on what I am doing and what my job is.

FOTH: How long would you like to ride for any do you have any goals?

SP: I would like to ride for as many years as I possibly can. Right now I am young and I can ride forever is what I think. (laughs) As long as my physical and health wise stays with it, I have no reasons why I wouldn't quit anytime soon. My goal would be, any jock can win 100's of races, but I would like to be considered a very good rider. There are winners and there are good riders. Like when someone looks at me whether lose by whatever, I'd like someone to say she did the right thing. She rides very well. That is a pretty big goal for me.

FOTH: Have you had any injuries and are you worried about getting hurt at all?

SP: Talking about injuries is kinda a superstitious thing. You never really wanna say that you haven't had an injury, but knock on wood, I have not had any injuries in my whole life with anything. I did have a horse fall on me in the morning and he actually fell on my leg and he bruised me up pretty bad. It is something you can't worry about or concentrate on. It just kinda happens. Sometimes horses take a bad step and they flip, and it doesn't mean a horse has to break down, they flip and that's it, your on the ground. I just go out there and do my job to the best of my abilities.

FOTH: Is there any track you have seen on TV you would like to ride at one day?

SP: Saratoga or Belmont would be nice. Gulfstream was very nice. A track is a track. You meet different people and see different riding styles.

FOTH: Would you ever want to go back to IL and maybe ride at Hawthorne or Arlington Park one day?

SP: I wouldn't mind going to Arlington. I am gonna stick around to where I grew up with my racing and riding and that is around here. A lot of people have seen my improve so much over the years that I have been here and I'd like to see what else I can do. I know these people and I know the track some and I have friends here. The people back home have grown up and either have kids or are married.

FOTH: Stacy I am all out of questions. Anything you want to say to wrap this interview up? Good luck with the rest of riding career.

SP: I would just like to thank John Forbes and his assistant Pat for all the help they have done for me.