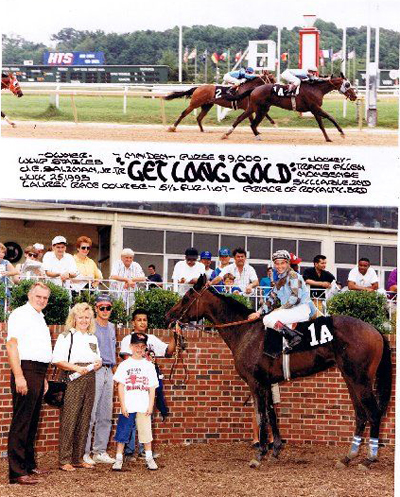 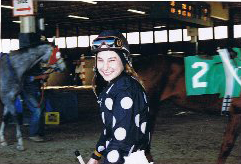 TA: I was born in Ridgewood, NJ and I grew up all over the place, but mainly Massachusetts.

TA: Oh I definite tomboy. I was into horses all my life pretty much. It's funny cause we never had horses and nobody knew why I liked horses, I would just go to the farms and ride em and play with them, that sort of stuff.

FOTH: Now did you know at a young age that you wanted to become a jockey?

TA: Yes. Actually when I was in 3rd grade and about 8 years old I had a little, you know those memory books that you have and I wrote in there that I wanted to become a jockey.

FOTH: What event or events actually led to you starting to ride and stuff?

TA: I got a job at a riding stable actually and we used to have races there me and the other workers and after that me, my mom and my step dad we started going to the races and that is when I knew I wanted to become a jockey. Then we ended up claiming some and we ended up getting into the business that way. I was still in school at this time and I went to collage for 1 year and then I said "that's it I want to become a jockey" so I found a school in Indiana to go to, to learn how to gallop and look for injuries and groom a horse, etc. That was in 1989.

TA: It was a lot of hard work, but I was so dedicated and wanted to do it that it kinda just came along and I didn't rush it and I took my time so I would know everything from the ground up, including hotwalking and grooming.

FOTH: How long did you actually ride for?

TA: Well I rode 5 years, but I was hurt about half the time. I got hurt a lot.

TA: It was at Rockingham Park in New Hampshire. It was great and the starter who gave me my license to ride was tough. He was very tough and he hardly gave out any licenses to any riders and he told me 'whatever you do I don't want you riding some 99-1 shot on your 1st mount, ride something that is OK, but nothing that is going to make you look stupid." And here I am on a 99-1 shot and he sees me that morning and he says "what did I tell ya" and I said that I know the horse and know he is going to be OK cause I gallop him every morning and in the race I only got beat by 3 lengths.

FOTH: Were you nervous at all riding for the 1st time?

TA: The whole day I was nervous until I got onto the track. When I got on the track and the horse I was fine.

FOTH: Tell me about your 1st win. Was that at Rockingham Park or somewhere else?

TA: My 1st win was actually my 3rd mount. It was funny the race was going long and on the turf and I had never ridden on the turf or gone in a distance race. The same with the horse.

FOTH: Did you win by a lot or was it close?

FOTH: What was it like crossing the finish line and realizing that you just won a race?

TA: I was in shock. When I went back to the winner's circle I had to wave to the steward's to let them know everything was OK with the race.

TA: Yes they got me with shoe polish, shaving cream, the works. They got me good.

FOTH: Was it tough for you riding at some of these tracks being a female rider?

TA: Maryland was very tough. New England when I was galloping there, I did it for 2 years and everybody knew me there and every body liked me and knew I had the hands and could handles horses and I did very well up there. Then I got engaged to Stewart Elliott (male jockey think Smarty Jones-chris) and a jockey got hurt down in Maryland and his agent wanted Stewart to come to Maryland to ride and I had my "bug" so I said "let's give it a try" and barely rode and wasted 6 months of my "bug" there and I think I only won like 4 races there. Then I went to Phila Park and did good in between all my injuries.

FOTH: What were some of the injuries that you had?

TA: The 1st one was 3 months after I started riding the horse I was riding went down and clipped heels with another horse and I messed up my knee pretty good. My 1st bad accident was when my horse broke down and snapped my wrist and also had another one where I had a terrible concussion and thought I was blind. I was on these 2 shows, "You Gotta See This" and 'Sports Disasters". Did you ever see those?

TA: Those were my 2 good accidents. I was on a horse and fell and a horse stepped on my head and crushed my helmet and broke my back and neck and then I went back to riding 2 years later, but just this one horse that I knew and galloped. Then we ended up clipping heels during the running of a race and she fell and landed on me and I was lucky cause it was a long race and the great crew came over and helped her off of me and then she stood up and I was hung up in the irons so that was a really good thing they were there so she didn't run off or anything. I broke my collarbone, ribs and my foot was messed up. Then I thought that's about it. (we both laugh)

FOTH: So that pretty much led to you retiring, you getting all these injuries.

TA: Yeah I was so lucky to be walking after I broke my back and everybody couldn't believe I went galloping after that. I was like I got it in me I got to keep going.

FOTH: So what tracks did you ride at during your racing career?

TA: You know I hardly do at all, but now my husband is a trainer and I worked with him until a few days before I had my baby and he is 2 now, so it has been a little over 2 years that I haven't worked at the track, so I don't follow it too much.

FOTH: Now if some young girl came up to you and said she wanted to become a jockey what advice would you give her?

TA: Well I would want to know her work ethics and she would need to be a really hard worker and dedicated and you can't let things get you down. In this business you are up early and getting to bed late and it is pretty much your life and if you really want to do it, you can do it. You want to have that connection with the horse too.

FOTH: Did you have a special horse that you rode or a track that you rode at or a day that sticks out in your mind like say you won 3 races on a card, etc?

TA: I liked Rockingham Park and the area. I liked riding at Phila Park too. I did not like Suffolk Downs.

FOTH: Turf course or dirt or it didn't matter?

FOTH: Now how did you prepare for a race?

TA: You take into account everything. You look at the form cause you want to check out your competition. Always listen to your trainer no matter what, he is the boss.

FOTH: Do you think another female will win one of those Triple Crown Races?

TA: It sure is possible given the chance. You need to have the horse too.

FOTH: Do you think there ever will be a time when the men and the woman will play at a 50% to 50% even level playing field?

FOTH: When you were riding do you think you were a good jockey?

TA: I thought I was very good when I wasn't hurt. (laughs)

FOTH: Did people try and discourage you from riding when you started getting some of these injuries?

TA: Yeah after I broke my back. They were saying "what the hell are you doing on a horse?" and then went on went back riding, just one horse, I rode her a few times and the 2nd time I rode her that one year and when I got hurt that time I said I'm done riding.

FOTH: Now with you being an ex-jockey can you tell say your husband if a jockey gave a horse a bad ride?

TA: Yeah there is a lot of things I can point out and some of the owners really appreciated that and when they would watch a replay they would say I know what you mean.

FOTH: Did you ever win 3 races on a card or win a stakes race?

FOTH: Was that at River Downs or Beulah?

TA: That was at River Downs. I finished 3rd and she ran really good.

FOTH: Do you think racetracks need slot machines or do you think they should work on promoting the sport better?

TA: Well it would be nice if they promoted the sport better, but I don't think that is ever gonna happen. Slot machines help the horseman get better purse money and the cheaper tracks won't get slots, but we still need cheaper tracks.

FOTH: Do people ever recognize you from your riding days when you were helping your husband out?

TA: Some of them do. I lot of them saw me on the TV show as well. (laughs)

FOTH: Tracie I am out of questions anything you want to say to wrap this up. Thanks for being part of the website and allowing us to interview you for it.

TA: This was great. I saw your website a while ago and I was like this is really nice maybe one day I'll be on it.

FOTH: Well your going to be now.

TA: Chris thanks again and I'll email you over some pictures to use for the interview.

FOTH: Great I'll look for them

Back to our Interview page