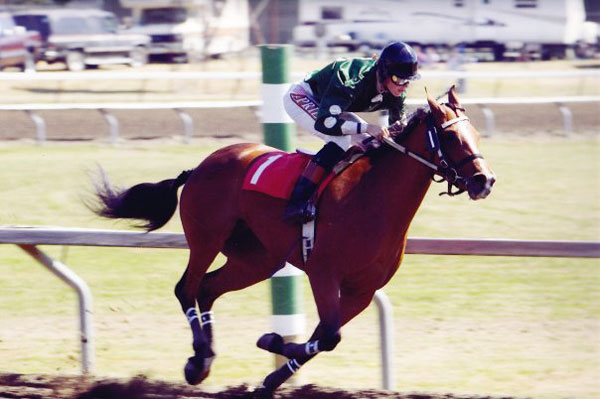 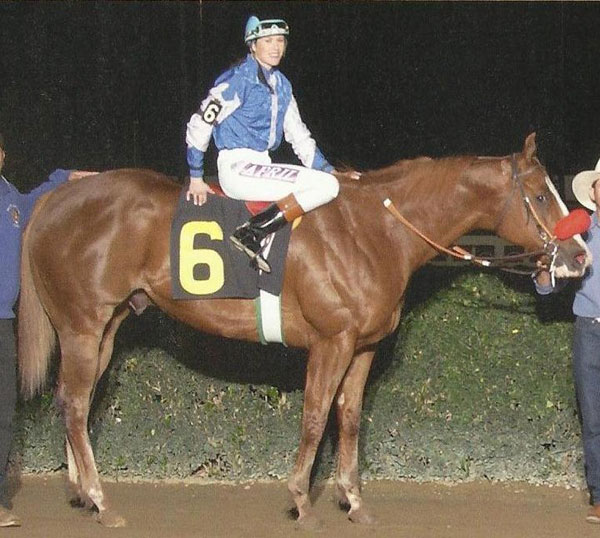 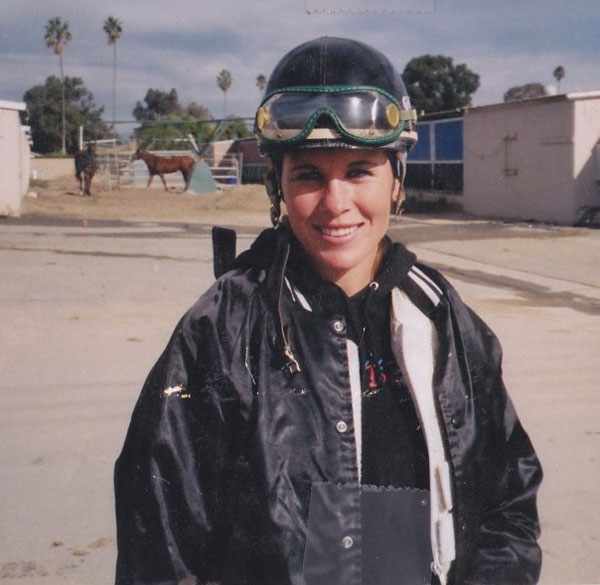 I was put in touch with jockey April Boag by my friend Sandy and I emailed April some questions and here is what she said to them:
FOTH: Where were you born and where did you grow up?


AB: I was born in Portland, Oregon and I grew up in northern CA and Fallon NV I ran the horse racing fairs till I was 5 with my mom and grandfather
FOTH: What sort of girl were you growing up and did you come from a big family?


AB: I was a ranch girl and yes my family is fairly big including cousins and all I grew up on my grandpa Darrell Thomas's ranch he was a trainer for many years
FOTH: When you saw a horse race for the first time what did you think?


AB: I grew up with it so I guess I always kinda liked it my dad and two of my uncles are jockeys and my grandfather a trainer.
FOTH: What sort of girl were you growing up?


AB: I was always dedicated to whatever I did I rode bulls when I was 13 just because my grandpa said I couldn't do it cause I was a girl and I helped break all the race horses since I was ten so I guess you could say I was a worker not much time for play but I loved it.
FOTH: What did you want to be when you were growing up?


AB: I wanted to be a jockey because i always watched my dad on TV and my mom says I used to sit on the arm of the couch and say "I'm gonna be a jockey to" while watching the races.
FOTH: What was your first job that you ever did?


AB: I worked at Safeway for 1 year.
FOTH: How did you end up working on the racetrack and what was your first job there?


AB: I would go with my grandfather to work his horses at the fairs I started out just grooming all of his horses and I ponied then when I was 16 I got my gallop license.
FOTH: Take me through the steps that led to you being a jockey.


AB: I started galloping horses at the track at 16 off and on because I was still in school when I turned 18 i went to Los Alamitos where my dad rode and started galloping in 2001 I got an offer to go to Arapahoe Park I went and got my apprentice license there rode for three months and went to Fresno where I win my first race after four months of riding.
FOTH: Did you have one or more people help teach you how to ride?


AB: My mother and my grandparents taught me everything I was in western pleasure horse shows at 5 years old I started young I was always around horses.
FOTH: How did your parents react when you told them you were going to be a jockey and have they seen you ride live much and have they ever gotten in a winner's circle with ya?


AB: Well my mom wasn't real happy cause she didn't want to see me get hurt and my dad always told me I was gonna be to big but later he said just stick to Arabians and TB be safe..(I didn't I rode two QH in Arapahoe when I got my license)
FOTH: Tell me a bit about your first race and what you remember about it now.


AB: my first race was 7 furlongs on an Arabian it went by so fast I couldn't believe it.  It was over before I knew it I ran fifth that race.
FOTH: Tell me about your 1st win and what was it like jogging the horse back to the winner's circle. What track was it at and did you win by a little or a lot?


AB: I was too excited to think about much except what they were going to do to me in the jocks room. It was Oct 6th in Fresno, CA on a horse called Dark Lady Flaming we win by about a length.
FOTH: Did the jockeys get you good after the race and did you know it was coming and since then have you returned the favor to another jockey winning his/her first race?


AB: They got me with three buckets of ice water and one of warm water my uncle Danny Boag was the first to get me and yes I have helped get other riders on occasions.
FOTH: How long have you been riding now and what tracks have you rode at in your career?


AB: 10 years I have ridden in all the northern fairs, Bay Meadows, Arapahoe Park, and currently I am at Golden Gate Fields.
FOTH: Looking back, do you think you were a good apprentice rider?


AB: I was ok I mean I had lots of practice with my grandpa being a trainer and my dad and uncles being jockeys but one thing about it I was never scared and always willing to learn I didn't know everything and I still don't.
FOTH: Have you ever ridden on the East Coast?


AB: No.
FOTH: What injuries have you had and what was the worst one?


AB: I broke my left ankle in 2002 in 2004 I broke my right leg and sprained my neck severely, then a year later I had a horse jump the rail in Ferndale and i got a pretty good concussion and cut my hand open the worst was my leg cause another rider dropped me and the filly went down broke her neck and I went head first she then rolled over the top of me I spent 7 days in the hospital then 1 month in a wheelchair and six months out of racing they put a rod in my leg which I still have today.
FOTH: Are there many other girl riders out where you ride?


AB: Right now there are only two others here in Golden Gate Fields.
FOTH: How long would you like to ride for?


AB: As long as my body lets me.
FOTH: Take me through a typical day for you.


AB: 6:20am first horse on the track and usually at 10:30am one of the last off then I am breaking a two year old filly after the track closes till about 12:00pm then I am at the barn then I go home and take care of my kids on days I ride its straight from morning work to Golden Gate then home and start all over again.
FOTH: What do you like to do when your not doing racing related stuff?


AB: Watch movies go swimming and I love theme parks and shopping.
FOTH: If a young girl came up to you and said she wanted to be a jockey what would you tell her.


AB: That anything is possible if u really want it you can accomplish anything through hard work. And never give up because somebody tells you that you can't do it you never know unless you try.
FOTH: Have you ever been recognized outside the race track?


AB: A few times by people who come to the races a lot
FOTH: To your knowledge, have you ever brought in a 99-1 shot or more in your career?


AB: I check for speed off the pacers and the ones that tend to die off. I also like to see who’s riding cause some guys ride with their heads and others are dangerous I like to see who I have around me.
FOTH: Best advice anybody ever gave you?


AB: RIDE HARD OR STAY HOME.
FOTH: Do you like to watch any sports?


AB: Not really just racing.
FOTH: Do you have a favorite trainer or horse that you have rode in your career?


AB: I used to ride the world champion mule TAZ I never lost a race on him I loved him he was great. Yes I also rode mules my whole career as a matter of fact I got the IRON WOMAN buckle in 2009 for the mules. I rode more mules that year than any other rider and I was the first female to ever get the award
FOTH: April I am out of questions. Thumbs up for the interview, any last words the floor is yours.


AB: Thanks for the interview and the opportunity to be on your website.