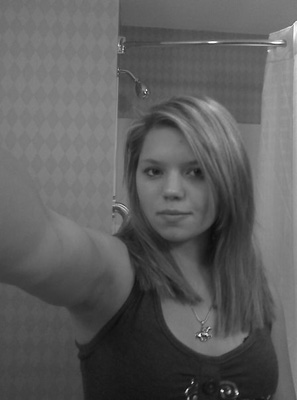 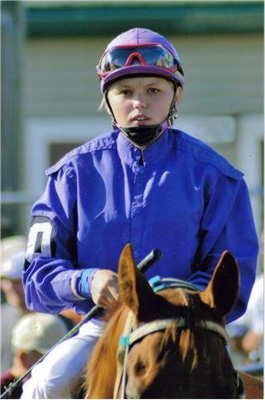 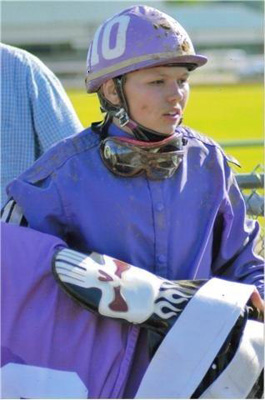 Ashley Dill is a young jockey that is currently riding out in the Mid West area and I sent her an email interview and here is what she said to my questions:

AD: I was born in Maryville, IL and grew up in Collinsville, IL until I was 16.

AD: I come from a fairly large family. My family has always been supportive of my decisions. They want the best for me and want me to be safe.

AD: I was a racetrack child. I lived and breathed the racetrack. If I wasn't at school I was at the races.

FOTH: When you were growing up was being a jockey one of the farthest things from your mind?

AD: Not at all. Being a jockey was all I thought about. It was in my blood.

AD: I grew up on the racetrack and my father was a jockey when he was young. My father passed away when I was young and I made it my life goal to succeed and follow my fathers footsteps.

FOTH: Did it feel natural getting up on a horse and did learning how to ride come pretty naturally for you?

AD: Horses were always natural for me. Learning to ride has always been pretty natural. I'm the most comfortable when I'm on a horses back.

FOTH: Do you get very excited before going out onto the track to ride in a race?

AD: I've rode many races and know matter how many I ride, I've gotten butterflies every time.

AD: Becoming a jockey has had it's ups and downs. It was easy in the sense that I've never been more comfortable on the back of a horse. On the other hand, it's been really hard. Being a jockey takes a lot of time and practice like anything else you want to be successful at. It's a very athletic sport and you have to be fit. It can be very hard on your body.

AD: I was a nervous wreck. Everyone, before the race, was telling me what to do and how to react. It was a lot to take in and I was terrified that I was going to do something wrong.

FOTH: Tell me about your 1st win. What was going through your head when you realized you won the race?

AD: My first win was at Yellowstone Downs in Billings, Montana for trainer Gordon Marsh. I was extremely surprised and excited. All I could think was don't fall off and don't freak out. Needless to say, I feel off only a few jumps after the wire. I was embarrassed but proud of myself at the same time. I was so tired after the race I couldn't even hardly walk. Everyone was laughing at me but they were proud of me, too.

AD: Well I actually got it twice. Once when I won my first race in Montana. That time they just got me with three buckets of ice water. I know that doesn't sound like it was that harsh but honestly it wasn't the warmest day and I had to ride the rest of the day wet. The second time was in Fonner Park in Grand Island, Nebraska. The second time was worse than the first time although it wasn't as bad as some of the stories I had heard. I was defiantly nervous when I heard of other jockeys getting painted with blue coat or tabasco salt. I was lucky though. I got a bucket of ice water and a bucket of fresh horse manure from the paddock. To top it off the other female jockey powdered me with baby powder and then they rubbed it in. That took several showers to wash off.

AD: I have rode at Yellowstone Downs, Fonner Park, Lincoln State Fair Park, Horseman's Park, Atokad Downs and Columbus Agricultural Park. I hope to get the chance to broaden my list of track this year and ride at Prairie Meadows, Canterbury Park, and Clairemore.

AD: Right now, due to a minor shoulder injury, I am not riding at any track. Fonner Park starts up in February and I will be riding there. It is just a small bullring track in Nebraska but it has a relaxed atmosphere. Last year I had the benefit of riding with Beth Butler, an older female rider. This year I don't think she will be riding with us but there may be one other young rider like myself joining me in the jocks room.

FOTH: How do you prepare for a race? Do you look at the program to see how the race might play out or do you listen pretty much to what the trainer tells you to do?

AD: I always read the form. The forms can tell you a lot about the horses that your riding or that are in the race. For example, it's always good to know if a horse lugs out in the turns or if a horse is more of a distance horse or more speed. On the other hand, I always do as the trainer tells me to do, even if I don't agree with what their telling me to do. I believe that listening to the trainer is everything. I don't want to not listen to the trainer and then lose the race. I would feel like it was my fault and I got the horse beat.

FOTH: Any funny jockeys stories you care to share with me?

AD: Well my nickname at the racetrack is "Sunshine". All of my closest friends call me it and we each have our own names. It had rained really hard for several days one week and we had to ride on a wet sealed track. I had to ride an early race and right before we legged up it stopped raining and the sun came out. The girl that was ponying me was talking about how crappy the weather was and how miserable all the other pony people where. To lighten the mood I started singing 'I've got sunshine, on a cloudy day...' It brought smiles to all the pony people that even the people who had it the worst had a good outlook on things. A few races later I heard some of the pony girls singing in while waiting for the next race.

AD: A typical day isn't ever to exciting. I wake up at around 5:30 and I'm on a horse by 6 galloping. I try to gallop or work as may horses in a morning as possible. Then I nap, eat lunch, and then back to the racetrack for the races.

AD: I'm a very active person. I like to be out with my friends. Whether were bowling, watching the football game or just having coffee. Aside from being with my friends I love to cook and bake.

FOTH: Do you go to the gym or do anything special to stay in shape?

AD: I have a naturally small frame so I am lucky and don't have to fight my weight. I try to run on evenings during the racing season and if I get the time I will go to the gym and work out. Mostly I just try to stay on the back of a horse. There is no substitute for the workout you get riding a horse.

FOTH: Do you have any fear of getting hurt out on the track at all?

AD: None at all. I believe that having fear is the beginning of how people get hurt. If your not comfortable and relaxed then your more prone to getting hurt. I've came off of horses several times and not once have I been uncomfortable going back on the track.

AD: I like all other equestrian sports and football. The Huskers and the Cowboys are my favorite teams.

FOTH: Do you feel you have been treated pretty fairly as a jockey so far in your career?

AD: Yes, everyone's been very supportive of me. I have received a lot of complements and even constructive criticism.

FOTH: If you had a chance to be on a show like "Jockeys" would you agree to be on the show and do you like the show or would you like to see different things on it?

AD: I would be thrilled to be on a show like Jockeys. I think its a fabulous show and I haven't seen anything on the show I would do different.

FOTH: Do you have an agent and if you do can you explain what exactly he does for you and how much money do you get per mount out where you ride?

AD: I have a great agent. My agent spends his entire day trying to get me on the best horses in the best stables. He finds horses for me to work in the morning and is always working to further my career. He gets 10% of whatever I make in a week.

FOTH: Ashley I am out of questions and any last words and thumbs up for the interview.

AD: Thank you for this opportunity to tell you about myself.