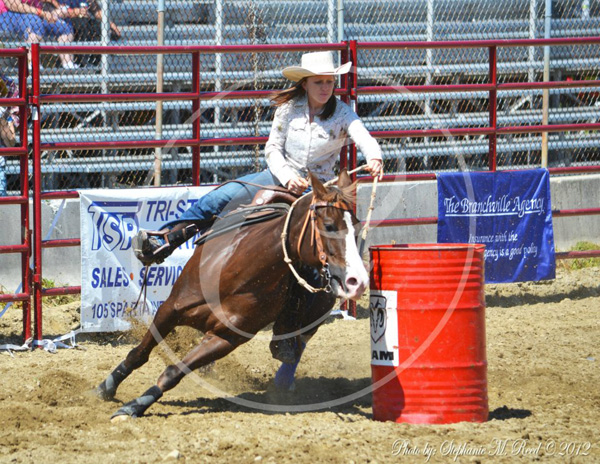 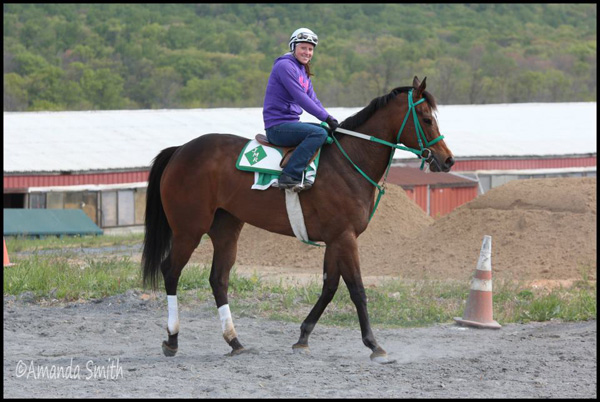 Kaylia Albright is a jockey that is currently riding up at Penn National and I got hold of her for an interview and this is what she said to me:

KA: I was born in Hershey pa and few up in Jonestown PA.

KA: I was never really quite sure what I wanted to do my senior year of high school I got the idea that I wanted to become a nurse but I never completely followed through with it.

I've always loved horses I was riding before I cud walk. I started youth rodeo at age 7 then worked my way up to joining the Pennsylvania High School rodeo team which any high school student from PA can join. After I graduated I took 2 yrs. off from rodeos them came back with my new horse to run pro rodeo which lasted until I started riding.

KA: Horses have been part of my life forever my whole family is involved. My mom was a great jockey n now trains my grandparents and uncle train as well.

KA: When I was like 13 or so I started getting on a few thoroughbreds for my mom she had a track at her farm but I really didn't like it and at the point I really wanted nothing to do with racing. Then after I graduated in 2009 I started breaking babies at the farm with my uncle just to make money then one day he was like we are taking these babies to track. Then from there I galloped for about 3.5 years then started riding.

KA: I thought about it but never told anyone. People would ask me all tell time if I was going to ride and I told them no because I wasn't 100 percent sure and I wanted it to be a decision I made on my own.

KA: I was very nervous and it was almost surreal. When I started galloping I didn't like it at all it was a whole different world my uncle would always tell me muscle up. I had a little bit of help but not much I learned a lot just by watching other riders an also listening to details of jockey n trainer conversations.

KA: Not really sure, I just kind of let things fall into place.

KA: Well my first race was an armature race for Norman Pointer on a horse named “Soul Provider” going long on the turf. Must say I was more scared of not knowing what to expect. Then a month later I got my jockeys license and my first real mount was for Kevin Patterson on a horse name “Smokin Pack” at Penn National. I won the race by a nose without a stick. Coolest feeling in the world.

KA: Part of this is up top. But truthfully I thought I was beat I wanted to think I won the race but I kept telling myself u got bet u got beat because I didn't want to think I had it and then be disappointed.

KA: They got me with cold water n sprayed me with the hose then they wouldn't let me in the jock room because my boyfriend Matt Rispoli was trying to hurry n fill a bucket so he could get me n it was a shock in he threw warm water on me.

FOTH: Now I know you are riding at Penn National Race Course currently. Are there any other female riders there?

KA: Yes there is one other female rider Erika Struck-Micklos.

KA: That's a hard one. My whole life revolves around horses pretty much.

FOTH: (funny question) Now recently at Parx you rode and won on a pick-up mount. Who was the stranger that came up to you after the race ha ha?

KA: Lol you completely took me off guard I didn't really know what was going on lol. I was just so excited I had just won on a horse that not only did I pick up but a long shot at that n coming up the rail like I did. I felt like I won that race not just because I was on a horse that should have won the race. It was also exciting because it was my first win at a track other than Penn National.

KA: I want to ride as long as time allows. My mains goals are to learn something from every race I ride and do the best I can. Truthfully I want my career to go as far as god will let me and I would like to believe it’s going to take me to the top.

FOTH: Now that you are a jockey, was becoming a jockey easier or harder than you expected and why.

KA: Oh geez I can't even tell you because I had no idea what to expect. But it is a hard lifestyle I do know that. I think the hardest part was the weight I lost 25lbs so I cud ride. Now grantee I did it the healthy way and it probably took about a year to loose.

FOTH: Have your parents ever come out to see you race live and have they ever gone into the winner's circle with you yet?

KA: Yes of course n I actually won on one of my mom’s horses.

FOTH: When you are in the jock's room do you look at the program to try and have a feel for how you hope or think the race you’re riding in will work out?

KA: Yes I like to look at specifics and I also give my horses a chance to tell me where they want to run and where they are comfortable. When the gates open so much changes and anything can happen.

KA: I will be involved somehow but right now I don't know how I try not to think of that.

KA: When you introduced yourself I was caught a bit off guard, but you have a nice website and thanks for the interview.