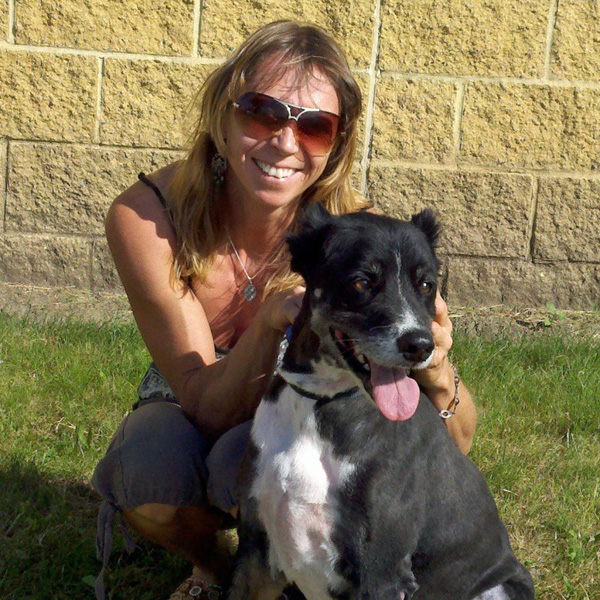 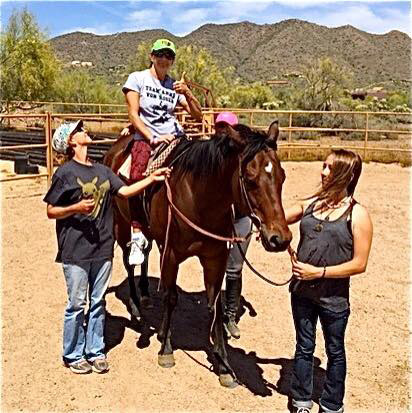 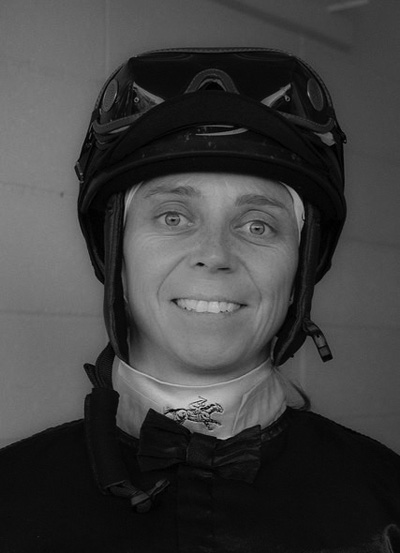 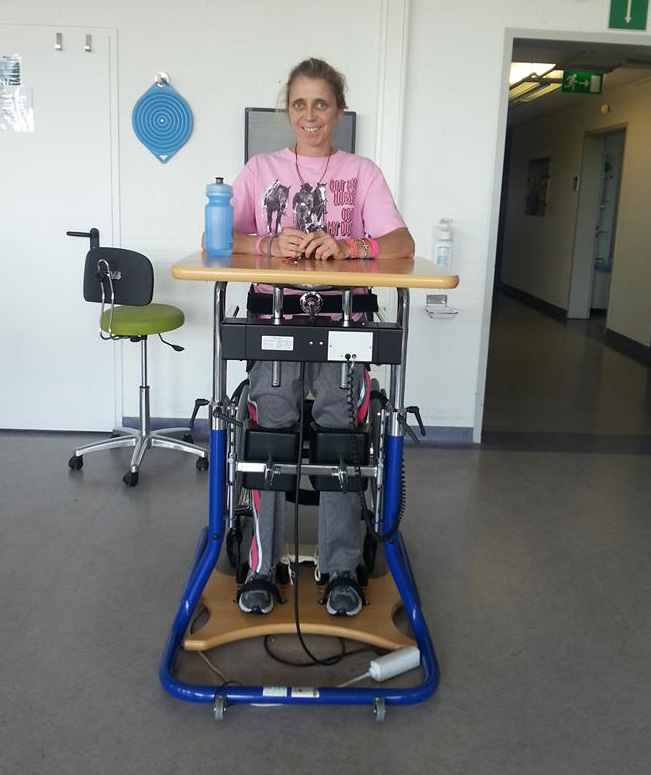 Anne Von Rosen was involved in a racing accident in 2014 at Turf Paradise in a quarter horse that unfortunately left her paralyzed from the chest down (5th thoracic vertebrae). Anne has plans to walk again one day and here is an interview I did with her and she is one courageous woman:

AVR: I was born in Fulda, Germany and grew up in Gersfeld. About 20 minutes from there.

FOTH: What sort of girl were you growing up? What did you want to be when you were growing up?

AVR: I had two older brothers, so I was more of a tomboy, playing outside, building tree houses and stuff. My father is a physician and I used to go on house calls with him when I was a little girl. So I wanted to be a doctor also. Until the love for horses took over.

FOTH: So where and at what age did you find a love for horses?

AVR: I had a love for horses from a very early age. My dad used to take me riding when I was 4-5 years old. I got an Icelandic horse on my 9th birthday.

FOTH: So I read where you exercised horses at several tracks in Italy, France, and England. Was there a big difference in the horses in those countries?

AVR: Yes. They train horses way differently in Europe than here. You usually have 3-4 horses to take care off, so after cleaning their stalls in the morning you start galloping. You get on about three horses a morning, but you spend around one hour on each horse. Walking/ trotting to the gallop. Then actually galloping your horse and then walking them back to the barn. They're cooled out by the time you get back to the barn.

FOTH: What was it like getting up on a horse for the 1st time and did it feel natural?

FOTH: Now how long did you gallop horse for before you became a jockey? Did anybody teach you how to ride and stuff?

AVR: I galloped horses in Europe for two years and here in the US for another three. I had people teaching me when I first started galloping and then you learn as you go.

FOTH: Now tell me how you became a vet tech at prestigious Hagyard Equine Medical Institute in Lexington, KY? How long did you do this job before the horse racing bug hit you again?

AVR: H-D-McG advertised in the Irish racing paper for veterinary assistants and I applied. I worked there for six months before I started working as assistant trainer. I missed galloping too much

FOTH: How long were you an assistant trainer and who was the actually trainer and was this at actual racetracks or at a farm?

AVR: I worked for W B Harrigan for 1.1/2 years. We had a barn full of babies. All Ogden Phipps horses and some babies getting ready for the sale. We were at Palm Beach Downs training center and in the summer had some horses at the training center in Lexington and at his farm.

FOTH: Now you started riding in 2001. Tell me about your 1st race. What track was it at? Were you nervous at all before the race and where did you end up finishing?

AVR: I rode my first race at Tampa and yes, I was nervous. I don't remember much from the race. I finished somewhere at the back.

FOTH: Tell me about your 1st win. What track was that at and did you win by a lot or in a photo? What was it like getting your picture taken for the 1st time?

AVR: I won my first race at Fort Pierre, SD. A 1/2 mile bullring, the races weren't even recognized back then. It felt great to have my picture taken.

FOTH: Did the jockeys get you good after the race and did you know it was coming? Did you ever get to do that to a jockey over your riding career?

AVR: The jockeys didn't get me after my first win. They were too worried making sure that I carried enough weight. And they were mad I beat them. (ha that is funny-chris)

FOTH: Looking back do you think you were a good apprentice jockey?

AVR: I think I did ok as an apprentice jockey. I still had a lot to learn and I didn't have an agent. But the other jockeys were willing to help when I asked.

FOTH: What tracks did you ride at over your career and did you have a favorite and why was it your favorite and also one or more that you particularly didn't care for?

AVR: I started at Tampa and I rode in Fort Pierre and Aberdeen SD, Fargo, a little bit at Beulah, Sam Houston and Delta Downs, a summer at Emerald, Golden Gate and the northern Cal fair circuit and mainly at Canterbury and Turf Paradise. The tracks I liked the least we're the ones on SD, mainly because they had such bad surfaces. I also didn't care too much for Sam Houston and Delta. I liked all the other tracks I've been to for different reasons.

FOTH: Were you at all surprised we finally had a Triple Crown winner this past year?

AVR: No, American Pharaoh has been so impressive in his races leading up to it and we were due for another Triple Crown winner.

FOTH; Where do you see horse racing in 5 years and do you think racetracks pretty much casinos and stuff to survive?

AVR: I think the casinos help keep racing going. I think without the casinos racing at some racetracks unfortunately would have a hard time surviving.

FOTH: Now I met you out at Canterbury Park I think it was 2005. Did you like riding at that track?

AVR: Yes, I love CBY. The track and the backside are great and the people are very nice. They do so much for racing. Everyone likes it there.

FOTH: Now I am going to fast forward to 2014 in which you were involved in a horrific accident during a quarter horse race at Turf Paradise. What do you remember about the race these days?

AVR: I remember that she ran a great race and I was really happy. That's what I was thinking galloping out. Then the next thing I remember, I was lying on the ground, not being able to feel my legs.

FOTH: Now I saw a long article on the Paulick Report (http://www.paulickreport.com/news/ray-s-paddock/paraplegic-former-jockey-anne-von-rosen-i-will-walk-again/) so how are things going for you these days in early 2016?

AVR: Things are going ok. It's not easy, but I am managing. Everything just takes so much longer, and I am still doing rehab and treatment on a daily basis. On the days I don't have any physical therapy I practice walking at home. Usually for 3 hours. Plus 1/2 - 1 hour on my exercise machine. I get up at 6 am (not 9 as it said in the report) and pretty much don't stop until 6 pm. So I am busy all day. I keep making slow progress, which is encouraging and keeps me going. I'm also driving now, so I got some of my independence back.

FOTH: Do you at all sometimes wish you never rode in quarter horse races as they on paper seem to be a lot more dangerous that riding in regular flat races?

FOTH: I also read you went out to Turf Paradise last year as they had a day named out for you. How special was that for you?

AVR: I don't know where that came from, but they didn't have a day named after me. (They did a 'walk for Annie' one month after my accident.) I surprised them by showing up at the races after having been away for rehab and treatment for eight months.( it was in the paulick report article-chris) Well, it's not true. Good story though. I did stand in my leg braces and I did talk about the two horses named in my honor. They also wrote in all of the early articles that I was paralyzed from the waist down. Wished that was true. Be a lot easier. I wouldn't have lost most of my core muscles. It's from the chest down. Shame they don't always get it right.

FOTH: I know you have traveled back and forth (read the paulick report article it is incredible), but where are you spending most of your time these days?

AVR: I'm back in Phoenix. I've been back for a year. This is my home now. I still go to Puerto Rico for treatment and back to Germany to visit my parents at times.

FOTH: I saw a You Tube video of you actually up on a horse recently. How was that moment for you?

AVR: It was great to get back on a horse and I try and go riding once a week.

FOTH: Do you look back with any regrets and say to yourself I should have stayed a vet's assistant?

AVR: No I don't. I loved being a jockey. I love riding.

FOTH: Are there any Team Ann Von Rosen shirts left because I want one?

AVR: If enough people are interested in buying one, Teespring will start up the campaign again. I think Karen is designing a new one.

FOTH: If anyone reading this would like to contribute anything in anyway, where should they go?

AVR: Best to contact the bookkeeper at Turf Paradise, Leanda Huff. Thank you!

FOTH: Anne thumbs up big time for doing this interview and any last words the floor is yours?

AVR: I want to thank my family and friends who have been helping and supporting me the last two years. For picking me back up when I am getting down. I wouldn't have made it this far without them.