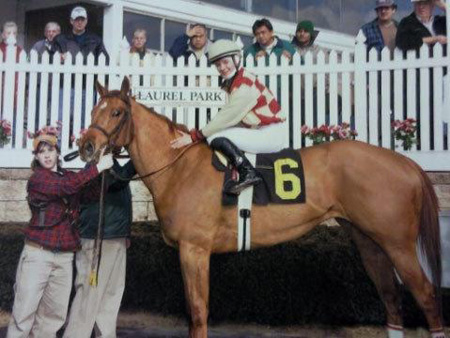 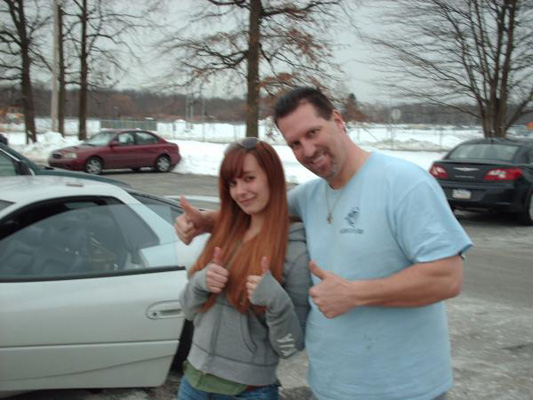 Ashley Yodice is a young girl that I got to know a bit when she was galloping horses last year at Phila Park before she became a jockey. I recently sat down with her and here is what she said:

AY: I was born and grew up in Brooklyn, NY.

FOTH: What sort of girl were you growing up? Were you a tomboy like most of the other female jockeys I have spoken to?

AY: Yeah. I am probably the epitome of tomboy. (laughs)

FOTH: Were you into horses at a young age or did that come later on in your teenage years?

AY: Well horses in general have always been in my life. It seems odd for somebody in Brooklyn to be interested in horses. I always went on trail rides. I took lessons when I was 3-4 years old right by my house.

FOTH: What did your parents say when you told them you wanted to become a jockey?

FOTH: When did you seriously start to think about becoming a jockey and how long did you gallop horses before you took out your jockey license?

AY: It is funny I ended up working at Belmont Park as a hot walker and one day my boss you want to see the horses breeze and I said "yeah" and Channing Hill was on a horse and he worked the horse rough and I was like "if that kind can do it I can do it" (she laughs big time).

FOTH: Looking back now, was becoming a jockey easier or harder than you thought it could be and why?

AY: I expected to go through what I went through especially being a female and starting to gallop horses in NY. I never went to a farm or anything like that and I went through a lot of criticism, which was fine, I think it either makes or breaks you know, it makes you who you are. I would say it was what I expected it to be.

FOTH: What do you remember about your first race and what track was it at? Were you nervous at all before the race?

AY: No, I was not nervous at all because I knew I didn't have a shot. (laughs) That was at the Meadowlands.

FOTH: Did you have anybody teach you how to ride or did you have to learn a lot on your own and did it feel natural getting up on a horse?

AY: It is always natural for me on a horse. I rather be up on a horse then in a room full of people. If I am in a room full of people, I feel annoyingly awkward, I don't know it is just how I am. As far as riding goes, I started with "The Chief" Alan Jerkins, he was the only one who would give me a shot. I did learn a lot from him. He really teaches horses how to run. I mean he really gives them interest and that is something that I learned from him that is a great asset. It is funny he taught me a lot as far as people I galloped with, when we galloped together we would gallop iron on iron and bump each other just like babies that were half broke so that taught me a lot by itself. Within a week I had breezed a horse and 2 weeks I worked at the gate so I learned a great deal with him.

FOTH: Tell me about your first win.

AY: My first win was Charlestown. It was freezing and most of the top jocks took off and I was in the 8th race and I didn't even wanna be there cause it was so cold and I just had the worst luck ever the past couple days and I was like "am I really here?". On top of that it was a gray filly and I don't like any gray horses especially a gray filly. To me that is like a double whammy, like double negative. The post parade I was made as she was trying to drop me and we won. It was a good feeling. I was yelling and hollering the whole way back.

FOTH: Did the jockeys get you good after the race and did you know that was coming?

AY: Oh my god. I drove up with Jeovani Garcia cause my navigation broke and I didn't know how to get there and he was also riding that day so we went together and he was the first one waiting for me along with my valet and Orlando Boccachica got me and a few others. I was freaking out cause it was so freezing. They got me good though.

FOTH: What tracks have you ridden at besides Charlestown and obviously Phila Park now lol?

AY: The Meadowlands, Laurel Park, and the other two tracks you mentioned.

FOTH: You have been riding at Charlestown a lot lately. Do you have to change your riding style at all riding there as opposed to riding at say Laurel or The Meadowlands?

AY: No, to me it is the same thing. A lot of people from Laurel, they say "why do you want to ride at Charlestown, it is dangerous," but to me it the same thing. It is a dirt track and your turning left and there is a bunch of horses. They have been there before and they know what they have to do. It is nothing different except the turns are a little tighter. I don't think it is a big deal at all.

FOTH: I know you spent the summer of 2009 galloping horses up at Monmouth Park. What do you remember most about that time?

AY: Does it have to be a good or bad thing?

FOTH: Whatever you wish.

AY: My favorite horse broke down. A horse I galloped for Steve Demario. I loved that horse. Me and him bonded so well and he actually came here (Phila Park) and Frankie (Pennington) rode him. I think he finished 3rd on him in an allowance race. I was pretty happy about that. He was a problem horse and they had a lot of problems with him, like he would flip over in the paddock and since I got on him he stopped doing that. Dutrow claimed him and in his next start, which was the last day of the Monmouth Park meet he broke down.

FOTH: Any funny jockey stories to tell and you can name names or not if you don't want to?

AY: Oh I will name names. (we both laugh big time). At The Meadowlands we always played jokes on each other, none of the other girls get involved in any of the pranks, but I do and I have fun with it. The 2 main people I always fooled around with were Joe Bravo and Paco Lopez. One day I am sleeping on the couch in the Common Room and I hear everybody laughing and I get up and there is Paco Lopez with a thing of mustard in his hand and I touch my butt and I had mustard all over my butt. I chased him all the way in the boy's room. I was gonna kill him. So I was like, you ride in the 9th race and I know where your car is. So I took a roll of caution tape and a took some wax and it was raining out and I waxed his whole windshield and he couldn't open his car up cause I cautioned tape his entire car closed on the top and all around the sides. (we both laugh).

AY: As far as odds go, I don't look at odds as I don't ride the odds, I ride the horse. I really don't even pay attention to that.

FOTH: Describe a bit what it is like riding at Charlestown and Laurel?

AY: Laurel is a very deep track, it is not deep as far as the horses going down into the ground. It does take a toll on the horses. You better have a fit horse if your going to come to Laurel. I mean, it's fair to the horses in a sense that it keeps them sound, but when you're going around one turn mile and your going to the 2nd wire you better have some horse left because it is very rare to see anybody win on the lead except for Erick Rodriguez with like a 7-2 shot. You have to save some horse and wait until the last moment to use it. Charlestown ten, ten, ten, ten it is fine with me it is fun. I have won 2 races there and I came off the pace one time 15 lengths with Private Citizen. I think we were only going 7/8ths with her and I came from 15 off to win. Salt Walter Cow Girl, I just sat off the cheap speed and waited a move from there and I had a ton of speed with her.

AY: Oh god, I don't know Maryland is boring there is nothing to do there. (laughs).

FOTH: Do you feel the weights of a jockey should be raised at all or are they good right where they are at now?

AY: They are good right where they are at now. You are always going to have people that are big and have trouble making weight.

FOTH: If you had the power to change a few things in horse racing what would they be?

AY: First thing I would change is the attendance. The way the sport is promoted is terrible. There is no new blood in racing and I don't think that is good for business. How do you expect to prosper and to last long if you don't have any new blood? That means spectators, trainers, everybody.

FOTH: Have you ever had any injuries and do you worry about being injured in the back of your mind at all?

AY: Oh I have had injuries. I fractured my pelvis in 2 spots, my sacrum and my L5 and I fractured my wrist. I got kicked in the head. I don't think about injury and this might be bad for me to say, but I just don't care, and a lot of people do care and if I never ever think about that and if I do it is part of my job. People die in this sport and everything happens and I am ready for anything. It will never stop me from doing what I do.

FOTH: Take me through what you do in a typical day and do you have to watch what you eat?

AY: Oh I have to watch what I eat. I wish I didn't have to watch what I eat, but I really, really do. As far as a typical day goes I go to Laurel, Bowie or Charlestown and breeze some horses and then go to Laurel and go ride and if I have time go walk my dog and if not I call somebody (laughs) and then go to Charlestown and ride and by that time I get home it is like midnight and then I go home and go to sleep and then do it again the next day.

FOTH: Do you have short term or long term goals for yourself?

FOTH: Ashley I am out of questions. Thumbs for the interview any last words you want to say to wrap this up the floor is yours?

AY: I hope to see you around Chris.