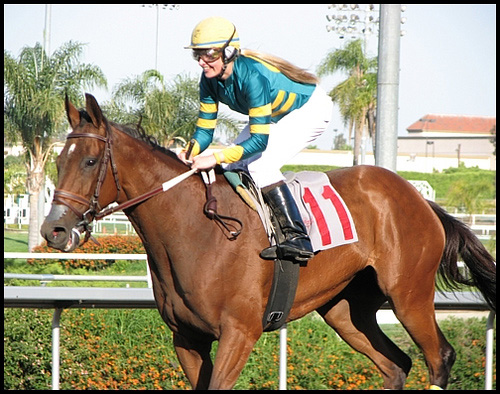 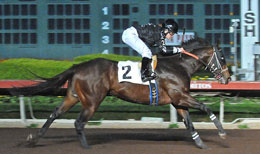 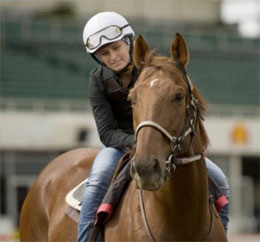 Cheryl Charlton is a jockey that has been riding for a number of years now and I sent her an email interview and here is what she said to me questions:

CC: I would say small. 3 other siblings but my older brother moved outta stated when I was young. I would say I was tom boy growing up.

CC: I wanted to be a jockey but never thought that wasn’t going to be possible and then I wanted to be a vet but I knew I wouldn't like putting horses down. And yes I huge passion for horses as a young girl. Got my first horse named champagne when I was 5.

CC: No I got lucky and had to avoid all of that extra unnecessary stuff :-)

CC: I was around 13 or 14 and was watching the Kentucky Derby on TV. I knew right then that that is what I wanted to do. Both my mom and dad were extremely supportive and are still to this day.

CC: I don't even remember the first time I was on a horse. I was too young to remember that. I did actually take riding lessons I want to say I was maybe around 7?? I want to say 7 because I didn't have my pony thunder at the time and I got him when I was 8 I do think that it did make me a better rider because it was at such a young age that I learned how to ride and I think that's helped me over the years on these race horses because you are just so comfortable on them.

CC: I was excited. It had taken me a long time to actually get to that point at least that's what it felt like. I remember Keith Craigmyle always saying don't be in a hurry you will know when you are ready. I think I actually finally got my license and started riding when I was 20.

CC: All I remember saying was I win I win. Lol. Not I won I win. I had Keith pick me up and all it was I win. It was for Keith and the horses name was blended toss. It was an awesome feeling. And I won easy. Had the lead the whole way.

FOTH: Now I know you ride quarter horses. Don’t you think that is a bit dangerous and tell me a bit about quarter horse racing since I have only seen it on TY on occasion?

CC: I have only ridden a handful of them but the only difference is that everything happens faster. They leave hard and fast and instead of popping you up they go down to the ground like a vette. There amazing. Strong powerful. It's a blast. I wouldn't say that they are any less dangerous then riding one of these thoroughbreds though. All in all I'm sure driving a car could be just a dangerous.

FOTH: Have you ridden in any races besides quarter horses races and are there many female quarter jockeys that you know of?

FOTH: How do you prepare to ride a quarter horse and I assume breaking out of the gate quickly is a must?

CC: I just think of it as riding a thoroughbred. No different.

FOTH: Do you feel that so far you have been got treated pretty fairly or do you feel that you had to work that much harder, being a female jockey, to get mounts and have trainers put you up on horses?

CC: No I have been treated pretty good actually. I don't have to work any harder than anyone else to get mounts. I got pretty lucky on that.

FOTH: Do you still follow other sports at all and what do you like to do when you’re away from the racetrack?

CC: I do follow baseball and football I don't know all the ins and outs but I enjoy watching them on TV and in person. I would say my favorite thing to do is go to the beach. I could never get tired of the beach at least during the summer when it’s warm outside. It's just sooo relaxing. I love hearing the waves.

FOTH: Where do you see the sport of horse racing going? Do you eventually seeing a bunch of tracks closing and just a few surviving in this casino/racetrack era?

CC: Oh yes for sure. You already have Hollywood Park closing so there goes one. I heard talks about Santa Anita as well. I no here at Los Al it's getting harder and harder every year to fill races. I remember when I first started riding it was full fields 4 days a week. Now it's 6 horse fields 3 days a week. So yes I do think some race tracks will be sold or what not. I don’t think it’s gonna happen in the near future no but hopefully if that time comes I will be done riding.

FOTH: What were some of your favorite tracks that you rode so far and is there any track that you would love to ride at one day?

CC: I love Santa Anita. That is my favorite. There is just so much history there. There really isn't any track that i am just dying to ride at. I am just thankful that to be where I am and am ok with leaving it at that.

FOTH: What was the hardest and easiest thing being a jockey?

CC: The hardest thing being a jockey for me was probably when I was on birth control and my weight sky rocketed to the roof. Lol. No matter how healthy I ate I just kept gaining weight. The easiest thing is just having everything come so natural.

FOTH: Have you ever had any injuries and if you had, what was the worst one and did the fear of getting hurt ever enter your mind?

CC: Knock on wood I have only had a broken collar bone and that was bad enough. It's difficult doing things even the littlest things with only one arm. I wouldn't say fear entered my mind but you do know what you are getting yourself into when you sign up for this kinda job.

FOTH: How long have you been riding and how long would you like to ride for?

CC: I have been riding for about 5 years. I would like to have kids and a family so I guess that will determine how long I ride for.

CC: This is an awesome job an awesome career and I’m very blessed that I am doing what I wanted to do. There is nothing better than winning. It's an amazing feeling especially when you win four in one night. This is my best year yet and so far I am the leading rider here at Los Al and I have a very good shot at becoming the first girl leading rider here ever. Just to know that is amazing. It’s a great accomplishment and I wouldn't want to be doing anything more then what I am doing now.