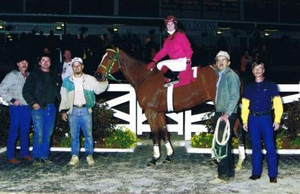 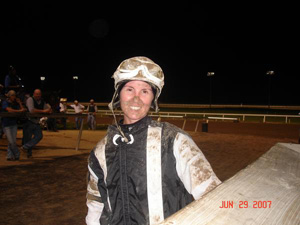 Christina Gray is a jockey I have known for a few years now and she has recently returned from a serious injury so I thought it was time to do a new interview with her and here is what she said to the questions that I asked her:

FOTH: Christina since I have interviewed you before I am not going to go through your whole racing career, but what have you been up the last say 5 years. I know you rode on the East Coast and recently you were down in the Southwest area. What made you decide to leave the East Coast and head there?

CG: I had an agent that was down here call me up and said they were working on getting the slots over at Evangeline Downs and he wanted me to come down early and meet some of the people down there and then go over to the Fairgrounds to race. I felt that I wasn't getting the breaks that I wanted at Suffolk Downs, I never got in a big barn and I was ready for a change so I told the agent that, Ôyeah I'll come down.Ó

CG: I had to get used to smaller tracks. Evangeline, the old Evangeline was 7/8Õs of a mile and Suffolk Downs is of a mile so its more, you really got to stand leaving the gate and I noticed that they like to go to the front here and there is a lot of quarter horse racing down here as well.

FOTH: Have you rode any quarter horses races yet?

CG: I have rode one and it was fun, but I wouldn't do it again. It was a blast and they used to run quarter horses against thoroughbreds and I rode against a quarter horse and I won the race so I can put that on my record.

FOTH: I know you have been out of action for a bit now, tell me about this latest injury that has kept you from riding?

CG: I had a huge gash across the top of my right foot, I think the horse stepped on my when I came off, I broke my big toe, cracked my left ankle and I have a chip in my right index finger. The bone healed up pretty quick and I was just waiting for that gash to heal and the swelling in my foot to go down and the doctor was ready to release me and 2 weeks before he did I couldn't get my foot in a boot, so what am I going to do? (laughs)

FOTH: I know you also had a serious back injury. Tell me a bit about that.

CG: That was December of 2004. That was at Delta Downs and that injury kept me out for 14 months. The doctor released me after 11 months and the break was between my shoulder blades so not being able to do much with my upper body and being hurt and my muscles being sore I ended up getting a regular job. Hurricane Katrina had come through here so I ended up getting a job doing clean up in New Orleans, which paid pretty well. I did that for awhile and then the 2006 Evangeline I started riding back. I love riding and I missed it when I wasn't doing it, so when I came back I decided I am just gonna ride horses that I like and I am gonna find one that I can win a race on and I found the horse ÒGot The Girl TigerÓ, and I had galloped him before I got hurt and I knew the trainer and he said you can ride ÒTigerÓ and he and I just got along great and I ended getting my 1st win back with him.


FOTH: Do you miss riding at all on the East Coast or are you totally comfortable riding where you are at now?

CG: I do missing riding up on the East Coast as the girls get more of a break and the trainers are willing to ride a girl rider more than down here. All the families are into racing and some of the trainers want to ride their cousin, or nephew, there is always a relative that they want to ride. I have broke in a little bit, but the back injury I had really set me back a lot.

FOTH: What tracks have you rode at in your career so far?

CG: I rode at Suffolk, Garden State Park, Finger Lakes, Hialeah, Rockingham, Monmouth, and then I came down here.

FOTH: Have you rode at all 4 of the thoroughbred tracks down there?

CG: I have not rode at Fairgrounds, but the other 3 yes.

FOTH: I know Delta, Evangeline, etc have slot machines and stuff. Have you ever walked through the casino area of these tracks yet?

CG: Delta when they 1st opened they had a free pull on the machine and I said Òok coolÓ and I went up and won $ 500! I have only been in there once or twice and I don't play with my money. I won somebody $ 300 one time. The slot area is too noisy and I don't drink and I don't really like to play as to my slots are boring.

FOTH: Do you feel you have been treated pretty fairly as a rider during your time down in the Louisiana area so far?

CG: Sometimes yes and sometimes no, it all depends. What I did notice was on the East Coast was that if a girl won a race on the horse the trainer would ride back a girl rider and what I noticed down here, Jerri Nichols (rip) was winning a lot she was on and if she couldn't ride the horse anymore then they would find one of the guys it wasn't like this is a girls horse now, then tend not to do that down here.

FOTH: Do you know how much longer you would like to ride for or are you taking things day by day right now?

CG: Right now I am just taking things day to day. I still like riding and at this point I don't know what else I would want to do. Like I said I had that regular job a couple years ago and the I had another job in sales and I hated it. I am gonna try it again this year, but I think I am ready to move to another track.

FOTH: Do you happen to know how many wins you have and if you do how many do you have so far?

FOTH: Now looking back, was becoming a jockey easier or harder than you thought it was gonna be?

CG: If I had known how hard it was gonna be, I am glad I didn't know (laughs) cause I might not have done it. The hardest part for me, cause I am naturally shy, was dealing with the people. Having to walk to a new track and going over to a trainer and say to him, ÔHi I'm Christina GrayÓ and blah, blah, blah.

CG: Oh god. I would say gallop for a long time and talk to as many older riders as you can and go watch the races, ask if you can go behind the gate in the morning. It really helps to get to know people. When I moved to Florida and began riding there it was like breaking in all over again as I didn't know anybody and when I went to Boston, I was breaking in all over again. If you decide you know what track you want to ride at, it is good to get to know people and they will be more likely to help you out. I had trainers tell me they would never ride me and then 6 months later I am winning races for them. (laughs)

FOTH: Do you think you will somehow, someway be involved with horse racing the race of your life?

CG: I would want to be involved with the horses. I love riding, I don't know if I am gonna gallop as a career forever. When I am done riding races and I decide to gallop in the morning, it will be a part time thing, like in the morning or on a farm type of thing. I would like to get in the more business side of it.

FOTH: Do you feel the weights need to be raised a little for the jockeys, even a pound or 2?

CG: I am happy where they are at right now. Since I lost the bug and came down here, I have never had a problem. It was hard for me as a bug, but once I lost the bug, I didn't have that much trouble after that.

CG: Oh yeah. It will happen as there is many more girl riders now, but it is gonna be hard. I am kinda curious to see what happens in the future. You still have owners, where you might ride horse in a smaller race, but then when it gets to be a big stakes race, they will want to ride the male jockey. I mean remember ÒSmarty JonesÕ and they wanted to take Steward Elliott off due to his non experience in a big race and the pressure of the Triple Crown. I mean come on, how many races has the guy won? Just because he never rode against Jerry Bailey doesn't mean he can't do it.

FOTH: Do you have a favorite track that you have rode at so far?

CG: Saratoga is my home track and I grew up going to the races there and I really love the atmosphere there and the crowds there in the summer. It is the best racing in the country in August. I also really like Hialeah, it is a shame they not racing there anymore and I loved the atmosphere there too. I liked the feel of the place.

FOTH: That is about all the questions I have for you. Anything you would like to say to wrap this up and thumbs up for doing this 2nd chat with me.

CG: Thanks for getting in contact with me again.