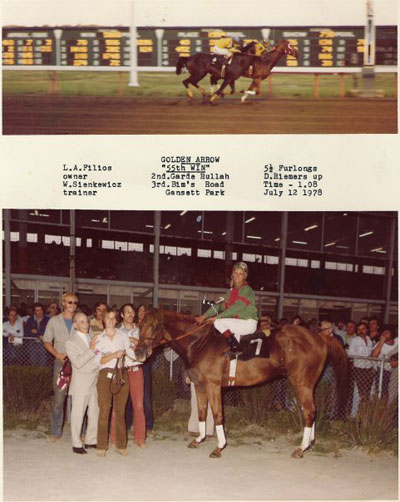 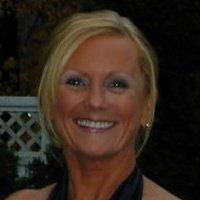 Debbie Riemers Downing is a retired jockey I found on Facebook so I asked her if she would interested in being interviewed for the site. She agreed, I emailed her some questions and this is what was said to them:

FOTH: Where were you born and where did you grow up? Did you come from a big family or a smaller family?

DRD: I was born and raised in Minnesota, my 3 siblings and I were raised by a hard working single Mom.

FOTH: What sort of girl were you growing up? Were you a tomboy like most of the other female jockeys I have interviewed over the years?

DRD: If I was to give any sort of analogy, I would say I was most like Ellie Mae Clampett of the Beverly Hillbillies. I loved all animals and always seemed to have a menagerie tagging along after me, lambs, pigs and of course the usual cats and dogs.

FOTH: At a young girl were you interested at all in horses or did that come later on?

DRD: We always had horses and they were part of our daily life and transport. I would ride to the local watering hole and tie my mare up to a tree as we swam and played. My Pop would come and pick me and my Shetland pony and transport us in the back of his pickup to the local fairs to ride in pony races. No inside fence and chicken wire on the outside. Perhaps that's why later I loved to ride the bullrings!

FOTH: How did the interest for horses come about and what did you think about horse the first time you saw a horse race whether it was live or on TV?

DRD: I always dreamed of being a jockey but never thought it was possible. Even as a child I fantasized I was Alex Ramsey of the Black Stallion books and every day riding the school bus would dream I was galloping over hill and dale. In those days it was against the law for a woman to be a jockey and it never dawned on my childlike brain that this was unfair.

FOTH: What was the first job you ever had on a racetrack and at that time did you have any interest in becoming a jockey?

DRD: I went out the next day and got a job at Calder walking hots. I ascended the food chain rapidly and was soon grooming horses and ponying. This was 1976.

FOTH: How long did you end up exercising horses before you became a jockey? What were some of the things you were taught as far as riding goes and did it feel natural to get up on a horse?

DRD: I didn't waste any time becoming a jockey, funny now how I look back and think how better my apprenticeship could have been managed. I galloped horses for Mockingbird Farms alongside Hall of Fame jockey Eric Guerin who patiently put up with my endless questions. "Eric, why do you shake your stick at your horse rather then hit him?" And in his slow Cajun drawl he would reply, "Well honey a lot of times you get a whole lot more run out of a horse if you are picking up there head and shaking your stick at them then beating them up."

FOTH: At the time, what was the best advice anybody ever got you and as far as riding goes did you end up learning a lot as you went along?

DRD: I listened, and listened and listened. But probably the best advice came from a trainer who once said, "Relax and enjoy your ride!" It took all the pressure off the race and allowed me to just spontaneously be in the moment. Later when I had my own horses I would tell this to my jocks.

FOTH: So take me through the last few steps of becoming a jockey and looking back what was probably the hardest obstacle you had to overcome?

FOTH: Tell me what you remember about your first race. What track was it at? Were there any other female riding at this track at the time and how nervous were you getting dressed and going out into the paddock for the first time?

DRD: I left Florida to come to the mecca of girl riders at the time, Suffolk Downs in the winter. Back then gals like Denise Boudrot had blazed and trail and it was a place to get an opportunity in the bitter cold. When it was freezing out it didn't matter if you were a man or a woman, it just mattered that you were crazy enough to get out there and go dashing through the snow.

I can't remember being nervous, just anxious and once on the horse it was like being home. Nothing mattered but the lil mare between my legs.

FOTH: Where did you end up finishing and how happy were you to get that first race under your belt so to speak.

FOTH: Tell me about your first win. What track was it at and did you win by a lot or in a photo if you remember and what was it like getting your picture taken in the winner's circle?

DRD: Next time out, same little maiden filly and we won. Picked up another horse in the next race and finished second. I was thinking this was an easy game!

FOTH: Did the jocks get you good after the race and did you know it was coming and what did they get you with?

DRD: There was no girls in the room that race and the boys did nothing. Kind of disappointing huh?

FOTH: How long did you end up riding for and what tracks did you ride at?

DRD: I would ride for 12-years at all the tracks then operating in New England. I would go anywhere and ride anything. I had a lot of fun riding the fair circuit. At Great Barrington in the beautiful Berkshires I would set a track record. Also at the fairs I would ride my last race on an ageless wonder called Golden Arrow who would carry me safely amongst old riders packing machines and bug riders with reins dangling. He still retained his zing at age 17. http://sportsillustrated.cnn.com/vault/article/magazine/MAG1095337/index.htm

FOTH: Did you ever have any serious injuries happen to you when you were riding and what was the worst one if there was any?

DRD: A filly flipped over on top of me in the starting gate breaking my leg and ankle and a vertebrae. At this time I was a mother of twin daughters and when I saw how my injuries impacted them, I decided it was quits.

DRD: Ohhhh we have been waiting for so very long haven't we? And each year we think, is this going to be the year?

FOTH: When you were riding did you and all the jockeys pretty much get along with each other?

DRD: In retrospect I don't feel there was a whole lot of love from the male riders. You have to figure their entire life they have been the little guy, they have been picked on and trod upon, too small for football, too short for basketball, now they come to the racetrack where the little man is king. Then a girl beats them? No I don' t think they liked it so much.

FOTH: Do you feel when you were riding, you were treated fairly?

DRD: Absolutely. In the latter days, when I was married to a nefarious gambler who liked to fix races I was often given more than fair treatment as I artfully tried to figure out ways to lose races. "Oh my, clumsy me, I dropped my stick.... again." LOL

FOTH: Do you still follow racing at all these days and speaking of, what are you doing with yourself these days?

DRD: Just the major races. I refer to them as "religious holidays." I give riding lessons on an old TB race mare for autistic children and teach yoga!

FOTH: Looking back does any race or day stand out in your mind when you were riding?

DRD: I had a lot of little 15 minutes of fame. It was fun. Sometimes I still have dreams of riding; I can feel the horse's neck, their body between my legs. This usually happens at times of life transitions, as if my mind likes to harken back to old familiar times.

FOTH: Do you think the weights should be raised a pound or 2 or do you feel they are fine the way they are?

DRD: There were times when riding the bull rings when opposing forces leaded my saddle to carry more weight than Phar Lap. I was always a heavy rider and would be amazed when I removed my saddle and it was sooooo heavy. But the horses won nonetheless. I honestly don't think a pound or two is going to affect performance and if it helps keep riders healthy and reduces the amount of time gulping lasix, sitting in the sauna or "flippin" in the toilet, sure.

FOTH: If you had the power, tell me 3 things you would change in the world of horse racing?

DRD: I went into racing very innocent and left it quite jaded. Racing is an industry, just like the beef or poultry industry and the consequence is dog food. Those poor horses, the drugs, nerves severed, torturing them in the stalls with machines, the abuse. Horses so drugged they don't even know they have legs underneath them. The industry needs to be policed by an entity other then itself.

So 3 things I would change? I would like to see racing back the way nature intended, hay, oats and water. I would say if you are going to breed thoroughbreds, be a responsible breeder and owner for the life of the animal and the racetracks themselves should give more heed to the voice of the horsemen instead of bleeding them dry.

FOTH: I am out of questions. Thumbs up for doing this interview and being part of my website, anything you would like to say to wrap this up?

DRD: The greatness of a nation and its moral progress can be judged by the way its animals are treated – Gandhi.