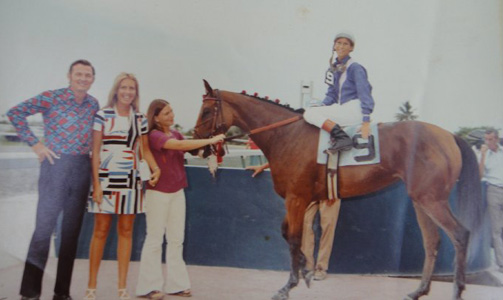 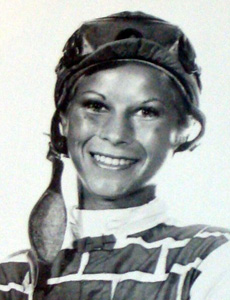 Donna Walsh is a retired jockey that rode in the 70’s and I recently got her on the phone for an interview and here is how the conversation went:

FOTH: What year did you first start riding?

DW: I rode my first race on Oct 11th, 1971 aboard a horse named “Till Hold” for a trainer named Johnny Campo and I got beat a nose by leading rider Eddie Belmonte and my horse I think went off 16-1 or 20-1 I don’t exactly remember.

FOTH: Obviously you were one of the first female riders. Now when you were young did you have a love for the horses or did that come later on in life?

FOTH: What led to the next step, like when did you decide to seriously think about becoming a jockey and did anybody help teach you how to ride?

DW: Well the way it came about was I had been doing artwork on photographs at a photograph studio directly out of high school and I got a little bored with that job and quit and went to the races one day and I think Hollywood Park or Santa Anita cause I lived in CA and I ran into a friend of my father’s who asked me what I was doing and I said I was looking for something to go and he said your father tells me great with horses and if your interested I can introduce you to a trainer friend of mine at the track, which turned out to be my first boss at the track. I started at the bottom as a “hot walker” and at the time I absolutely wanted to gallop horses and never had any aspirations of being a jockey at that point, not until I ended up at Belmont and it was through breezing a horse out of the starting gate with 3 other apprentice riders and I was supposedly on this cheap horse and beat em in like a 5/8ths of a mile workout. Now I am saying to myself I can do this and this is when I got hooked.

FOTH: Now obviously riding in NY is not the easiest place to ride and with you being a female and riding in the 70’s did you have to overcome a lot of obstacles just to get your jockey license?

DW: Actually I have to say pretty much negative to that because a lot of the men in the beginning may have tested me a few ways like trying to knock my foot out of the irons going down the backstretch and I came right back at em and they went whoa OK she is a tough cookie and she had a good hand on a horse, leave her alone. What I found was the only time the male jockey had an objection to at least my face about woman was if they were what I call a “loose horse” or a “bad hand” with a horse and who wants to ride with a dangerous rider? Nobody does. So I didn’t blame em and I had heard them talking about other woman or even some other male jockeys.

DW: I quit the track I believe in 1976 and that was when I was riding at Calder Race Course. I did get sat down for 6 months during and I am guessing here in 1972 or 1973 early on in my career due to a pending investigation which I was cleared, but it was a mess.

FOTH: What tracks did you ride at besides Calder and Belmont?

DW: I rode Delaware Park, Aqueduct, Liberty Bell, Monmouth Park, Hialeah, Gulfstream, Tropical Park, Timonium. I also got to ride in Australia, Jamaica, and Australia was wonderful as that was the first international woman’s race in the world and that was in Sydney Australia and then went up the gulf coast, which we did not expect to do, but the racing commission after the first race was flooded with phone calls and it was the heaviest bet race of the day and they never expected that so the other race course said don’t let them go home, let them ride in one of our races to bring in the crowd.

FOTH: Did you ever get in physical fights with a male jockey or did they ever try and give you any crap in the room?

DW: No. I will tell you I yelled at a few of them. Never got in a physical altercation with a jockey male or female.

FOTH: Now was there a favorite track that you roe at?

DW: I absolutely loved Belmont and Hialeah. I feel sorry that Hialeah went belly up.

FOTH: What sort of injuries did you get when you were riding?

DW: Well nothing I would call major. I broke my collarbone I think that was at Belmont and I broke my ankle in the starting gate in Jamaica and that was rather a bummer. Outside of that I had a few spills and 5 concussions my entire time riding.

FOTH: Do you think when you were riding that you were a pretty good jockey?

DW: I think, well my agent thought I was fabulous, looking back I think I was decent, I wouldn’t say I was the best, but I think I had good hands with a horse, but I had weaknesses that I felt I needed to improve on like I was never a good, strong left handed stick rider. I was fine right handed, but I was not good left handed. That always bothered me.

FOTH: When you riding did you have any fans heckle you so to speak?

DW: Oh yeah. What I remember most, was and they said it good and loud cause they probably bet on me was they yelled “go home and do the dishes” and I yelled back “I can’t do that either”. (we both laugh) I had a stalker on the racetrack that was the scariest thing about being a jockey that stalker followed me for over 2 years and actually broke into a house I was renting and threw a hatchet into a living room wall on defecated on a master bed. How is that for fun?

DW: No I did not. There was a lot of things going on at the time and I just came to the realization that it would be in my interests to call it quits and do something else. It was my decision. When I rode my last race I did not know it was going to be my last race.

FOTH: You were down at Pimlicio not too long ago. Would you do a race like that, I mean by coming out of retirement and riding in a race with all retired female riders?

DW: Well actually I was asked to do that race and I declined that and the reason was I have been out of racing some 30 years and if I had a facility where I could get on horses and get fit and be a safe rider I would do it again in a heartbeat.

FOTH: What did you think of that whole event?

DW: I think the crowd absolutely loved it and the race was actually the 2nd fastest race of the day and there was another jockey with me and she said that if they do it again she will do it. Unless I move someplace else I don’t see myself doing it. Those woman sacrificed a lot to do the race and the girl that won Gwen she gallops everyday and I just don’t have those kind of contacts like she has.

DW: That is a tough question. It is an extremely hard life and boy oh boy you put me on the spot. She would have to be a tough cookie because there is so many obstacles to overcome and you have to have really thick skin and blow off certain things and don’t let things get to you. If it was a sensitive person they would never cut it.

FOTH: Can you tell after watching a race if a jockey has given a horse a bad ride?

FOTH: Do you think we will ever see another horse win a Triple Crown?

DW: I believe some day we will see another Triple Crown winner. I think if the horse “Ice Box” hadn’t gotten so messed up he could have possibly won the Triple Crown.

FOTH: Should the weights be raised or are they good right where they are?

DW: I think more about the horses than the jockey and sorry for the jockeys that have to reduce, but that is the way it goes.

FOTH: When you rode overseas, did you have to change your riding style at all and were the horses any different over there?

DW: It was a completely different experience as they run the other way around over there. I was used riding AC/DC or jacking up my riding irons around the turns and by rights I should have done it the opposite there, but there wasn’t enough time to prep and get my body in condition to do so as I recall I rode level, but I did start jacking up my iron a little bit when I got the call in that we were gonna ride other tracks. So I was used to riding the other way. As far as the horses there, they seemed more laid back than the horses I was used to riding in the US. They were easier to ride.

FOTH: When you retired from racing, did you miss riding say a year or 2 after you stopped or did you realize that it was the right decision you made?

DW: I missed the excitement and the travel as every day was a new day, but I jumped right in trained and broke horses for quite a few clients. I did go back to my old days by trail riding and did a little horse show business and did kid riding lessons. I did training and I enjoyed that. Even to this day when you compare what I am doing today as to when I was riding, my day is pretty damn boring.

FOTH: Did you ever bring a 99-1 shot in or more when you were riding?

FOTH: Oh when you won your first race were they doing the jockey initiation thing back then?

DW: Oh yeah. I just remember water being poured on me and I put the guy in a half nelson for that one.

FOTH: Donna I am out of questions. Any last words and if they do the event down at Pimlicio again are you gonna come down for it again?

DW: The only reason I went down this year was for Jason Neff and his jock the movie thing (www.jockthemovie.com) and that is why I was invited to go so I doubt I will go unless they have another ladies race. That was a really fabulous time and the girl jockeys that rode and other former riders that were there like myself that were just there to support them and for the cure it was for a fabulous cause and I told myself I have to go no matter what. Who knows what is gonna happen.

FOTH: Are you in the movie?

DW: Yes they interviewed me for it.

FOTH: Best of luck with everything.

DW: Thanks for the interview Chris and good luck with the site.