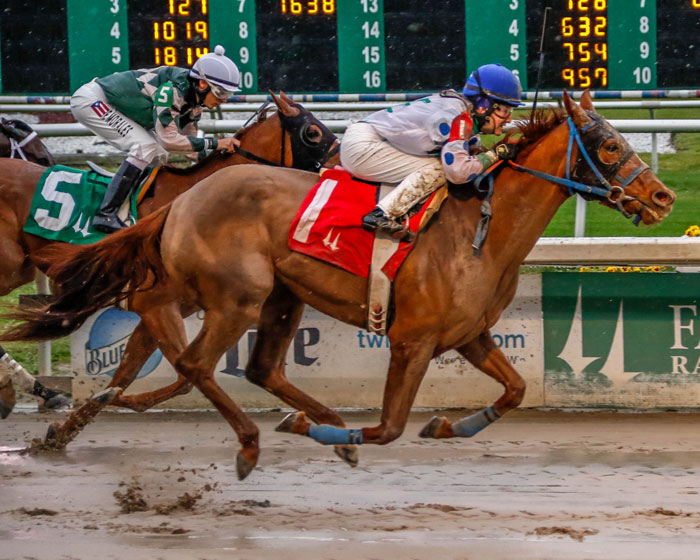 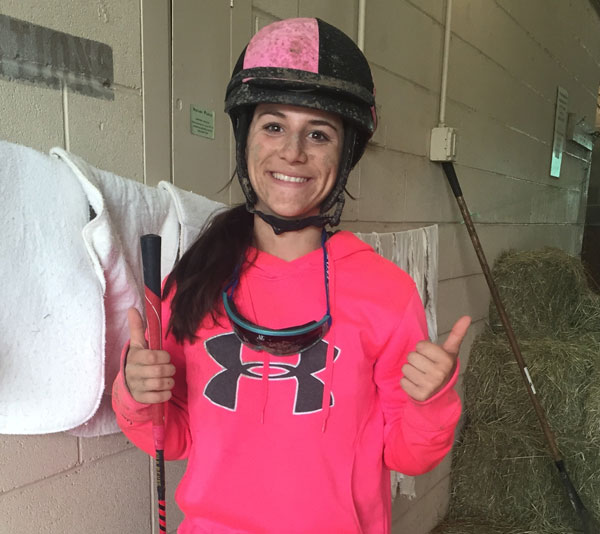 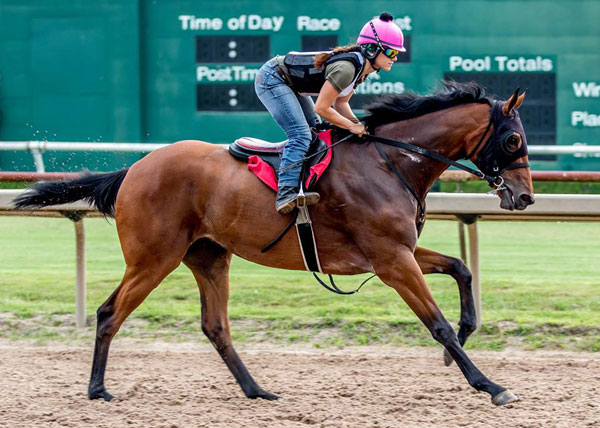 Erica Murray has been a jockey for a little over 2 years and she is currently riding down at Louisiana Downs and this is her story:

FOTH: Where were you born and where did you grow up? Did you come from a big or small family?

EM: My daddy Alabama and my mom was born in Louisiana. I was born and raised in Haughton Louisiana, five minutes from Louisiana Downs. I have three older siblings, so I would say it’s a big family.

FOTH: Do you remember the 1st time you saw a live horse race and what were your impressions of that experience?

EM: I remember the first race I watched of a horse I had been galloping. I was so nervous and excited. I remember I screamed at the top of my lungs when they hit the stretch! When he won I was in shock. It drove me so much to become a rider. I started really looking at races, and watching jockeys.

FOTH: Now when did the horse racing or just horses in general bug hit you?

EM: I was born with the horse bug. I used to go to a catholic school, and my mom still has a paper I wrote when I was six, it said- This year I learned about: GOD, Next year I want to learn about : HORSES.

FOTH: Now how did you end up starting to work on a racetrack and at the time was the plan to become a jockey or did that happen later on down the line?

EM: I have two ponies that I used to keep out at farm where there was racehorses were being turned out. There was a couple out there that trained, and watched me grow up. They always joked one day they would sneak me out to the track and make me a jockey. They brought me out to the farm when I was 12 and put me in an exercise saddle. I started galloping at 13. When I was 14 I broke out the gates and I remember telling them “There’s no going back now!” (shout out to riddick racing stable).

FOTH: What did it feel like getting up on a horse for the 1st time? Did it feel natural or something you had to get used too?

EM: I was young when I first started riding, like seven years old. Riding felt very natural to me, I knew that’s where I was meant to be.

FOTH: Who helped teach you to ride and how long did you gallop horses for before becoming an actual jockey?

EM: I was out at the farms galloping until I was old enough to get my exercise license, Justin and Linda Riddick helped me when I was out there. When I got to Louisiana Downs I had many people help me, Kevin Martin, Denise Schmidt and Larry Jolivette a.k.a, Dead Eye, they are the real M.V.P.s, but there were many other people too. At the Fairgrounds I got to work horses for Joe and Rosie Sharp. I got my jockey license when I was 17. I was blessed to have legendary retired jockey Ronald Ardoin mentoring me and helping me! He really pushes me to be the best rider I can possibly be.

FOTH: Were your parents very supportive or were they scared that you were going to get hurt? Have they come to see you ride much?

EM: My parents are absolutely amazing. My mom used to wake up on her weekends off to drive me out to the farms at five in the morning. My first summer race riding at Louisiana downs I thought my parents may have quit their jobs lol. They were at almost every single race. They know getting hurt is a part of the game but they are behind me.

EM: I galloped 3 years on the farms and almost 2 years on the actual track. There was nothing more satisfying than that. It was like “Now I am, complete.”

FOTH: Looking back, what was the hardest thing you had to do in as far as becoming a jockey and the weirdest?

EM: The hardest thing I did was leave home the second time. The first time is fun and exciting but the second time you realize how hard it is to be away from family. I think that’s just growing up though? Also I had to learn to recognize when I’ve made a mistake, accept it, learn from it and then move on from it and don’t beat myself up about it. It’s definitely something I am still learning too.

FOTH: Now tell me about your 1st race. Were you nervous at all in the jock's room? What track was it at and what was it like being in the paddock and then going into the gate and actually riding in a race?

EM: I was a nervous wreck in the room. My friend Cassandra and fellow jockey made fun of me the whole time. Everything after walking out the room was like a dream. I was at Louisiana downs, and about 100 people were there to watch my race. I told my family they were not allowed to scream, but as soon as I walked out one person started screaming and then they were all screaming. I was last to load, and that was probably a good thing because I was so jacked up at that point I thought I was going to explode.

FOTH: Now tell me about your 1st win. What was the name of the horse and the track and how happy were you jogging a horse back to the winner's circle to get your picture taken?

EM: My first win was also my first race! My horse’s name was Broussard. In my win picture you can see my mouth open like I am smiling, but I was actually hyperventilating. The outriders pulled me up and jogged back with me because I was crying. The feeling was unbelievable. Even better, that my family, cousins, friends, friends, of friends, and even some of my old school teachers were there to experience it with me. I was in a complete state of shock. It was the best thing that ever happened to me.

FOTH: Did the jockeys get you good and did you know it was coming?

EM: I was so in shock I couldn’t even think. A couple trainers got me with ice water as soon as I got off Broussard, and then when I was walking back to the room they got me really good with water, then baby powder, and ketchup. Probably some other stuff too but that’s what stuck out.

FOTH: Now I know you have ridden at the Fairgrounds. What is it like riding there and what other tracks, if any, have you rode at?

EM: I’ve rode races at Louisiana Downs and Fairgrounds. I enjoy Fairgrounds a lot, but they’ll never take country out me. The long stretch really teaches you to be a patient rider. It’s much tougher at Fairgrounds then LAD, but I think it has made me a better rider.

FOTH; Are there many other female riders riding at the Fairgrounds these days?

EM: Jocelyn Gomez and I were usually the only ones in the room when I was there, but a few others came in sometimes like Cassandra Naupac, formerly known as Buckley and Danielle Sorese.

FOTH: So far in your career do you think you have been treated pretty fairly?

EM: Overall I’ve had a positive experience. I had my ups and downs, but I always find the inner strength to pull myself up. I was served lemons but I made lemonade.

FOTH: Does the thought of ever getting hurt enter your mind or do you pretty much just block that out?

EM: I don’t ever allow myself to think about it too much. When I am thinking about that means I’m not thinking about riding, so obviously I can’t think of it!

FOTH: Now take me though what you do in a typical day.

EM: On a non-racing day, I usually wake up. I aim for 5:00 and go to the racetrack till about 10:00. I’ll shake hands, talk to trainers and try to get on as many horses as I can. Somewhere in the morning I get an Icee or starbucks. I try to smile and wave at everyone on the backside. Then I go home and catch up on anything I couldn’t do all week, (Clean my room). Then I’ll go ride my old horses at the farm, and try to do some sort of workout after that. My favorite thing to do is run the turf course and listen to Beyonce’s newest album. On a racing day, I still go to the track in the mornings, and then from there go nap in the room or get on the equalizer till race time. Then I go to bed.

FOTH: What are some things you like to do when you are not doing race related things? Do you follow any sports teams?

EM: I love riding. If I’m not racing, I’m on a horse anyways. They are really my passion. Besides that I’m usually hanging out with family or friends. I’m an avid Karaoke fan. I also watch Yu Tube conspiracy theories or sleep. I act like I watch the Saints, but I honestly have no idea what’s even happening in football.

FOTH: If some little girl came up to you and said she wanted to become a jockey, what advice would you give her?

EM: I know when you are a little girl you dream of being in my world never forget it. If you want it bad enough, it will come to you. Girls are just as strong as boys .Do not let anyone tell you to have a “realistic” dream, if you are committed to it, go for it without reservations.

FOTH: Do you have any idea how long you would like to ride for?

EM: As long as I still feel the same passion I feel right now, I will keep riding. I’m going to keep riding because a winner don’t quit on themselves.

EM: Lying in a ditch somewhere. Not injured, simply taking a rest, wondering what I should be doing with my life.

FOTH: What do you think horse racing needs to do to make it more popular like it was way back when?

EM: There are so many things we could do to help racing. I myself invite all my non racetracker friends to the track, and they love it, but before I started racing they all thought you had to pay and be 21 just to get on the racetrack! I think we need to try to appeal not only to gamblers but to the equestrian world also. We need more advertising and education on racing. Concerts and exotic animal races are cool, but shouldn’t the actual racing be the most exciting thing? People need to feel like they’re apart of racing, just like they feel they’re apart of any other sports team.

FOTH: Erica I am out of questions any last words to wrap this up?