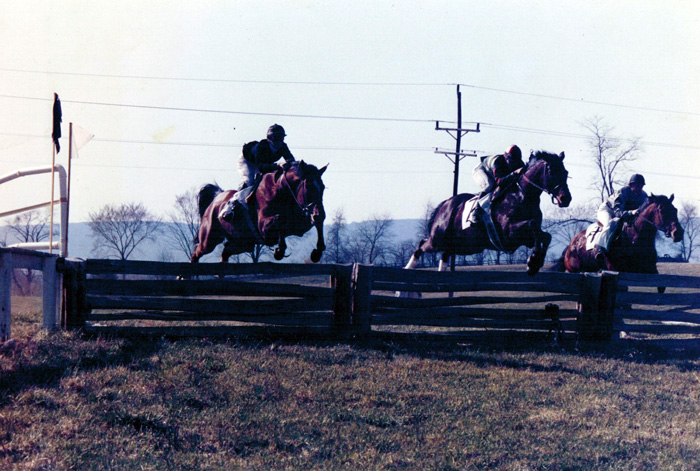 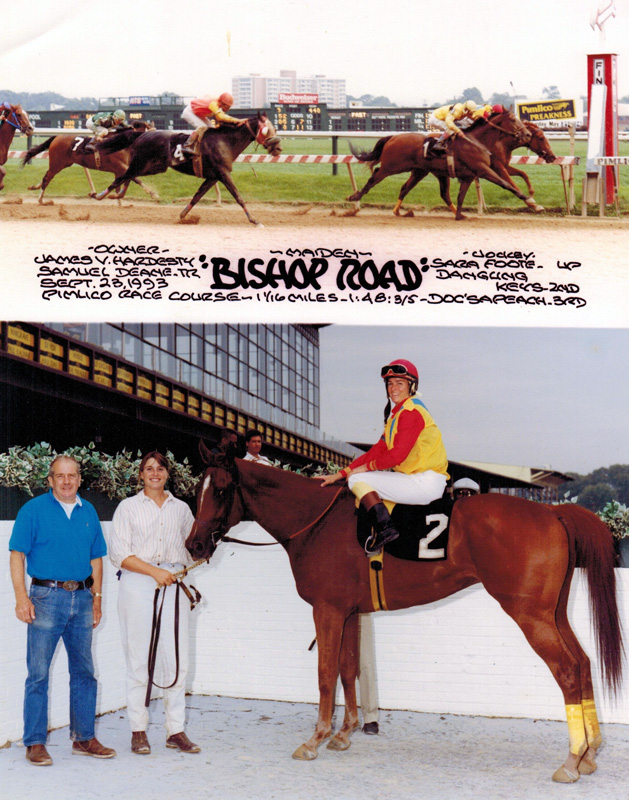 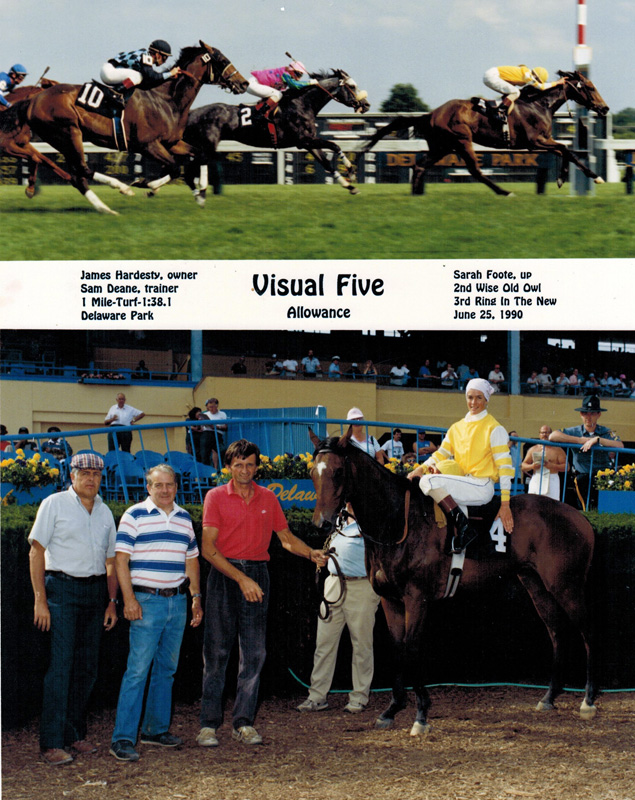 Sara E.H. Frederick is a jockey I asked about doing an interview a few months ago and she said yes and dummy forget all about her. Well I got hold of her a second time and here it is and she rode in the 80’s up until 1996.

SF: Born in Munich, Germany. My father was in the Army so we moved often: Texas, Kansas, England (U.K) and Virginia!

SF: I am the oldest of three children and my parents are only children, so only second cousins.

FOTH: At what point in your life did horse enter your life? Did you ever go to any racetracks when you were a young girl?

SF: I started taking riding lessons when I was 5 yrs. old, no I never went to a racetrack when I was young, I watched lots of racing on television and told my parents I wanted to be a jockey!

FOTH: Now tell me what your 1st job on a racetrack was? What track was it and if you remember, what year was it and how old you were?

SF: My first job with racehorses was at a little 5 furlong training track galloping horses ( Belvoir Training Track) in Marshall, Va. I think it was in 1985, I was in my early 20's!

FOTH: You told me you started to ride jump and flat races at Point-To-Points. What exactly is that and was this before you started working at a racetrack and how long did you do that for?

SF: Point-To-Point races are steeplechase races, jumping over hurdles or timber jumps and flat races like the racetrack except they are all on the grass!  I was riding at the point-to-points while galloping horses in the morning, I did this for about a year!

FOTH: Now at what point did the thought of becoming a jockey enter your mind and when you did, did you at that point begin to do some exercising of horses in the morning at that point?

SF: I wanted to become a jockey when I was nine years old, but I didn't gallop my first racehorse until I was in my early 20's!

FOTH: Did you have somebody teach you basics of riding at this point and if you did what are some of the things you remember most?

SF: I already new how to ride, up until I was 22 or 23 I had been pony clubbing, horse showing, eventing, and fox hunting!  My boyfriend who was a steeplechase jockey put me on a mare that was racing at the time, it was 0 degrees out, the track was frozen solid and the mare ran off with me for about 2 miles, from that day on I swore I would learn to gallop all horses and never let them run off again, I got pretty good at it!!!

FOTH: In an email you sent me, you said you needed to lose some weight before becoming a jockey. At this point around how much did you weigh?

SF: I lost about 15 pounds, I am 5'7" tall for a jockey. I went jockey school at Charlestown Racetrack , I got a journeyman's license because there was now way I could ride with a bug, I couldn't make those light weights!

FOTH: Now from how long that you decided you wanted to become a jockey, did you actually ride your first race?

SF: A couple of months, I completed the jockey school at Charlestown got my license and rode!

FOTH: Now what did your parents think of all this and looking back was becoming a jockey easier or harder that you thought it was going to be?

SF: My parents where very nervous but they knew they wouldn't be able to stop me! It was not hard at all, I've been told I am a natural, I had feel for a horse!!

FOTH: Now you rode back in the 80s up until 1996. I imagine at that time, you went though a bunch of crap about being a girl and riding races as back then there wasn’t a lot of female jockeys.

SF: Yes a lot of crap especially at Charlestown, the guys tried to intimidate me, I used to go through holes and up the rail, the guys would tell me where going to put me over the inside rail, I didn't let it get to me, I just kept riding to win, didn't win them though!

FOTH: So what was the feeling like finally having a jockey license in your hand?

SF: It was great, I got a speeding ticket on the way home!!!

FOTH: Now we will fast forward to your 1st race, which you rode at Charlestown Racetrack. How nervous were you before the race and where did you finish if you remember?

SF: Yes I was nervous as hell, but it was a good nervous!  I didn't hit the board!

FOTH: Now did a bunch of the male jockeys at the time, give you a rash of crap or were most pretty supportive of you?

SF: There were a few that have me shit especially when I won and took the shortest way home which was right up the rail, they didn't like it when I went through on the rail!

FOTH: Now you rode your 1st winner in Sept of 1987. What track was it at and did you win by a lot or in a photo? Do you still have that win picture somewhere?

SF: I won my first race at Charlestown by about 5 or 6 lengths, yes I have the win picture, my mom is in it too, the filly's name was Ocean Jet, it was her first start!!!

FOTH: Did the jockey’s get you good after the race and did you know it was coming? What did they get you with if you remember and did you ever get a chance to return the favor at one point in you racing career?

SF: Yes they got me I think with shaving cream , and yes I got to return the favor!

FOTH: What tracks did you ride in over your career and did you ever have a favorite or least favorite?

FOTH: How long did you ride for and for you, what was the hardest thing about being a jockey?

SF: I rode for about 10 years, the hardest thing was not eating and wanting to ride better horses!

FOTH: Share with me a few funny jockeys stories if you would?

SF: After a race at Delaware Park, I galloped back to the numbers, (where the groom takes the horse after take your saddle off) it was pouring rain, the trainer asked me what I thought, I looked at him and said, I think it's raining out, then I walked back to the jocks room!!!!

FOTH: Did you have many injuries and what was the worst one?

SF: I had a few, collerbones, fingers jammed and fractured, toes from hitting the sides of the starting gate, several concussions and a broken leg, I was extremely lucky!!

My worst injury happened out Foxhunting my horse crashed through a jump and I came extremely close to breaking my neck, I hit the ground head first. I couldn't feel my arms for 3 hours, spent 5 hours on a backboard in the ER!

CT scan showed trauma to my spinal cord, God was looking out for me that day!!!!

FOTH: Do you feel you had a certain riding style and for the years you rode, what was your favorite year out of all of them?

SF: Yes, I have a great feel for a horse during a race, I could sit very still and wait with them until time to get on the throttle, horses only have a quarter to three eighths mile kick to finish strong with, I loved the distance and turf races but if I rode some sprints I hoped I was on fast horses, that's for sure!!!

FOTH: Now what led to retiring and around the time you retired did you know you were going to and what were the thoughts going through your head when you rode your last race and after you retired, did you miss it much in the beginning or was it just time to move on?

SF: I got pregnant with my second of four boys and my mom was tired of babysitting, I was gone every day galloping in the morning and riding in the afternoon and night at what ever track I was riding that day! My parents also had a small breeding operation, two or three brood mares! We did everything, foaled them, raised them, broke & trained them, raced them!! My mother slept in the barn during dialing time, we had a lot of fun finally getting them to the races and we actually won a few, I really enjoyed riding our own homebreds !!

FOTH: What were some of the highlights and lowlights of your career?

SF: Wining races was my most memorable time, I won 2 back to back at Delaware Park one day in the pouring rain, that was awesome high!!!!

Lowlights for me were probably losing good horses due to injury or sickness !!

FOTH: Any last words and thumbs up for the interview.

SF: My last words are, more than anything else, I deeply miss riding races especially when I was winning on a nice horse!!! I am very lucky, I still ride and train show/ Foxhunting horses five days a week, my employer has a beautiful facility and very nice horses, I am extremely lucky!