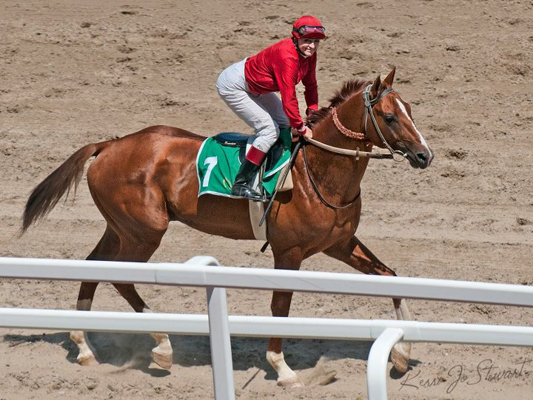 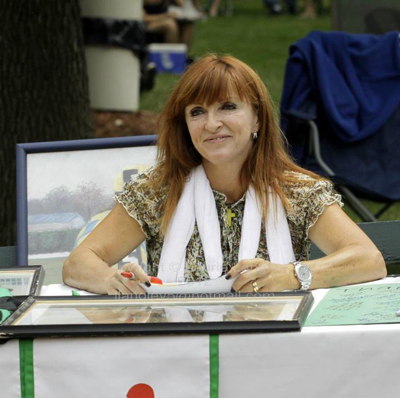 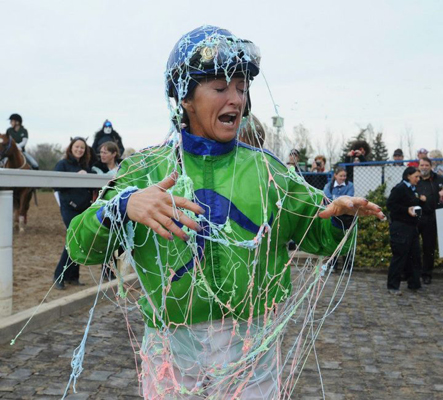 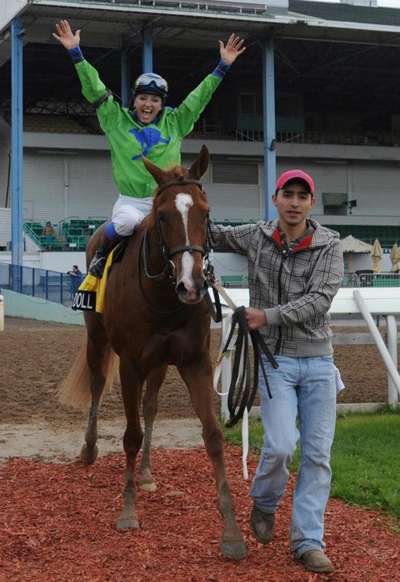 Somebody emailed me and asked me why I hadn’t interviewed Francine Villeneuve. Well he put me in touch with her and big dummy me didn’t realize that she was retired and that she had ridden for over 25 years and is a member of the 1000 win club. Here is her story:

FV: I was born in Ottawa, Ontario, Canada and grew up in Winchester Springs, Ont.

FV: I came from a small family. I am an only child and spent most of my time with my horses on my family's farm.

FV: I really wasn’t sure what I wanted to do when I grew up but thought it should be something with animals. I had a horse from the time that I was 6 years old. I was always doing something horse related. Absolutely loved them.

FV: Horses became a part of my life when I was 6 and my dad's mare had a foal and was given to me. I started taking riding lessons at that time. My first live horse race was witnessed at Connaught Park near Ottawa, a standard bred race. My first thoroughbred race seen live was at Woodbine and it was so exciting to me. Very impressive and awe inspiring.

FV: I worked at Woodbine as a hot walker, groom, and exercise rider.

FV: When I was working at Woodbine as an exercise rider, people, agents etc. started calling me jock and asking me if I was going to ride. At that point and only then did I ever even consider it. So yes people did encourage me and my parents thought it was a great idea.

FV: I was nervous and so excited. I felt a huge responsibility to do a good job for my trainer, owner and gamblers. Many people offered advice. I felt like I had to take every bit of it in and use what was most beneficial to me. The trainer who put me on my first horse would give me pointers and confidence in telling me I could beat the boys. He would always tell me to stay low to the the saddle when breezing but he put it much more colorfully which I can't repeat here! His name was Andy Smithers and he was a wonderful man and horseman who always gave underdogs a chance. Several older jockeys would give advice randomly and a patrol judge, who I would go up in the tower to watch races daily, at the 3/8 pole would tell me what I was seeing and what to watch for. Very helpful. His name was Angus Mcarthur and when I had been riding for several years, asked me to ride a very good horse of his and we won several stakes. He turned out to be a Canadian champion named Twist The Snow.

FV: It was almost surreal. I couldn’t believe that I was actually going to be riding racehorses. I felt like the luckiest person in the world to be able to be doing this for a living. I just hoped that I could live up to people’s expectations. If I can remember correctly. I got my license in July, rode some quarter horses immediately at Picov Downs and rode my first thoroughbred at Woodbine at the beginning of September.

FV: My first race was 7 furlongs at Woodbine. I rode a filly named “Autumn Lyric” for Andy Smithers. It felt amazing to be wearing silks for the first time. I was nervous and excited at the same time. I finished a close third. I remember being between 2 riders on the lead down the backside. David Penne was on my outside and he kept saying "you’re gonna get tired, you’re gonna get tired ', so I tried to conserve a little.

FV: My first win was on a horse named Roman Ruckus. He was trained by Herb Schnitzler. He won easily and I won on him again 3 days later. That was at Woodbine also. I felt exhilarated jogging back to the winners circle. I remember thinking" I could really get used to this"

FV: They just threw some water on me. It didn’t feel like there was a whole lot of excitement from the male jockeys. There weren’t any women jockeys there.

FOTH: What track are you riding at currently? Is there any other female riders there and for those who have never been there was is the track like?

FV: I retired this year and am only galloping at Saratoga. The last race race I rode was in Turkmenistan, There were no other women there and the track was magnificent. Very grandiose, full of gold statues and huge. The track was a mile and a half and we went clockwise. The surface was not very good. Very inconsistent. So deep on the inside, we all rode on the outside fence down the lane. The surface was sand and artificial particles like carpeting. It was filled to capacity and the president of the country was there. There was very tight security.

FV: As I said I am galloping now for Nick Zito at Saratoga. Really enjoying it.

FOTH: What do you like to do when you’re not doing horse related stuff?

FV: I like to hang out with my son and do fun stuff with him.

FV: Yes I like to sit and let a horse get comfortable, get his stride and finish strong. Making a horse comfortable has always been my goal. I tried to never change his style of running. I had most of my success riding this way.

FOTH: What is the hardest and easiest thing being a jockey?

FV: You definitely have to work harder at proving yourself worthy, for people to take you seriously. I have not always been treated fairly, no. In the latter part of my career I got much more respect. That had to do with the fact that being a female jockey is more accepted now because there have been more very talented women jockeys competing and the fact that I have proven myself to be a competent rider also.

FV: I have been plagued with many injuries. The worst one was a broken pelvis from a horse flipping on me. I prayed to God every day to keep me and all my fellow jockeys safe but after that you must put it out of your mind. As you mature you are more aware of ways to lessen your chances of getting hurt and do your best to apply them.

FV: I think I will always be involved in racing in some way. I strayed away from it for a short time but returned having missed it.

FV: Thank you for providing this platform for people to become familiar with the many women who have devoted their lives to horse racing. They truly are a unique group who have experienced the thrill of riding these wonderful equine athletes.