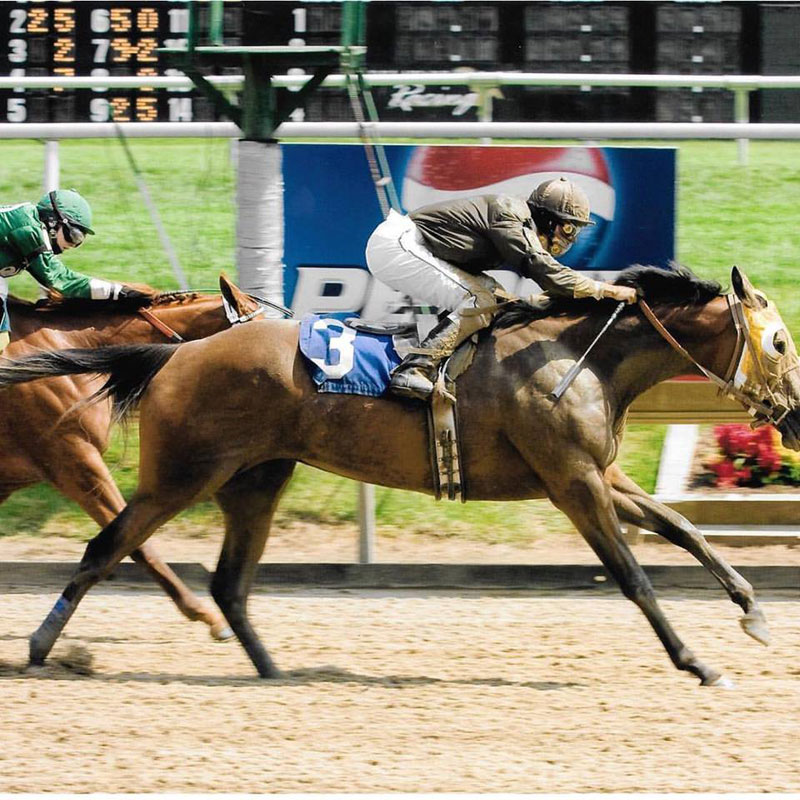 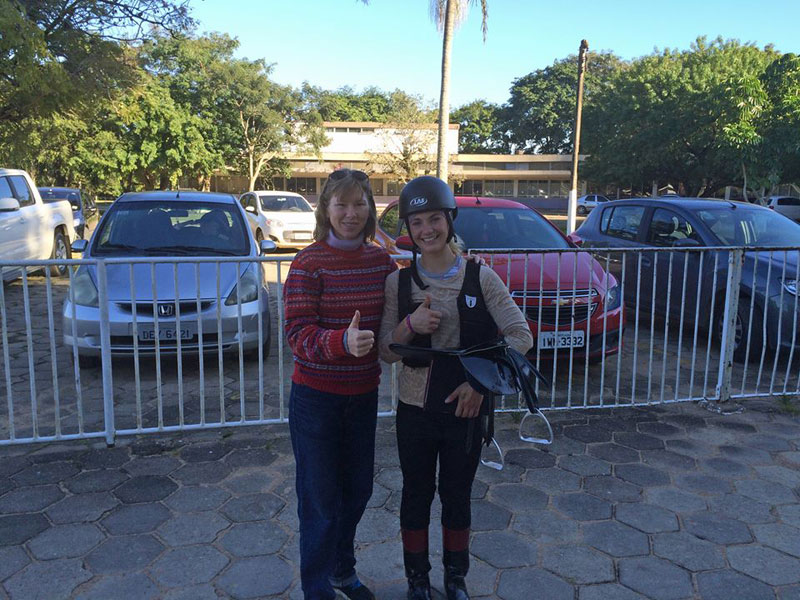 I have known Janice L. Blake since I was working at the now sadly closed Garden State Park and since the precious interview I did with her is as ancient as the Philadelphia Flyers winning the Stanley Cup, ok not that old ha ha, but anyway here is a new interview with her for your enjoyment:

FOTH: Did you think when you started riding races back in 1998 you would be still riding in races these days?

JB: I didn't actually look that far ahead.

FOTH: Going to throw a few racetrack names at you. When I say the words Garden State Park what are some memories you have of that track?

FOTH: How about Atlantic City Race Course and how good was the turf course there?

JB: The turf was/is even better at Atlantic City. I remember the female jockey's room was/is in dismal shape and how everyone wore just any ol' silks. I always think of Frank Sinatra when I ride there.

FOTH: Now what are your memories/feelings of your first race these days?

JB: I was very thankful that the woman trainer, Cynthia Crandall, chose me to ride her horse, Chocolate Madelaine. It gave me hope. An assistant trainer for a big trainer from California asked me why I was trying to be a jockey because no one was going to ride me anyway. Nice, huh?

FOTH: So have you ever gotten nervous before a race for say the 1st 2 years of riding in your career?

JB: Yes, sometimes I get nervous before a race, but as soon as I walk out into the paddock, see the horses and get on, it goes away and confidence returns. So satisfying to be on a horse.

FOTH: Do date is there any one or 2 races that just stick out in your mind and you just can't get them out of your head?

JB: Tampa, where I started, which has a nice dirt course, and Belmont, which has a great set-up for the horses.

FOTH: So overall how would you rate your apprentice part of your career?

JB: It wasn't easy. No one wanted to work with me. No agents would take my book, even though I was a bug. I was shunned at every doorstep. I didn't come from a racing family, so I had no ready-made business right-off-the-bat. It was very difficult, but I persevered to accomplish my goals and met a few people here and there that gave me an opportunity. There is a lot of sexism and plain suppression around every corner. I felt like, and still do, that the racing industry just wants women to go away. It is a horrible atmosphere for women. I get harassed every day on the track from someone looking to score with me, even though they know I'm married. Even when I do a good job, the owners want to change jockeys and put up a "better" one, or one of their friends, or an agent is their friend and now that the horse showed something, they want their friend's jockey on the horse. There is no integrity in the racing business. It's a horrible environment. I would not recommend it to anyone. And the way the horses are treated is a crying shame. The trainers and vets act like horses have no pain sensation.

FOTH: So with that being said what are some things you would change about the sport if you could?

JB: It's difficult to say, because this kind of discrimination is societal and cultural. It's so ingrained; people don't even know they're doing it.

FOTH: Do you have a weirdest race that you ever rode in moment?

JB: I rode a very, very sway-backed horse at Tampa. We finished third and the guy told me in order to pull him up, I had to run him straight, after the wire, into the outside fence. Otherwise, he wouldn't stop.

FOTH: Over your career so far have you had any arguments with any of the male jockeys and if so what was the worst one?

JB: Nick Santagata was always harassing me, and Tony Black, too.

FOTH: Has there ever been a most surprising win of your career so far?

JB: The one I remember the most is when Nick Santagata was on the lead at The Meadowlands and I came up to him ion my horse around the 1/2 mile pole. He said, "Aw, come on, you guys!" Then he looked over, saw it was me and called me a f***ing C***. I told Braulio about it, my husband, and he said something to Nick the next day. Then Nick came back to me and said I didn't have to rat him out to Braulio. He's lucky I didn't take him to the stewards. This sport is so welcoming to female competitors. NOT!

Tony Black once asked me how do I come in just to ride one horse that is 20-1. Of course, I'm sure riding a longshot is far beneath him. It can't be THAT far beneath him, as he's so short to begin with. (As in close to the ground, as it is.) Not a big fan, if you can tell.

As I generally ride longshots, every win is most surprising. I wish I knew what it was like to know I would win the race, then just go out there and have no worries and just pull past everyone in the stretch. The best part about winning is there's no explaining to do after the race. Even when I ride a horse that's 110-1, I come back and the trainer says, "What happened?" I am so tired of dealing with such abject losers and uneducated people. If they've been training horses for 35 years, then they should've learned something by now. I am really getting fed up with this game and the mentally ill people participating in it.

FOTH: Now let's talk a bit about this book you had published. What made you decide to write one? How long did take to put together and who put it out? What is the name of it?

JB: I wrote the book for my 12 year old niece who was horse crazy. She wanted to know more about riding race horses so I began writing down a few pointers. As I was putting pen to paper, I thought how beneficial the information would be to others in the business, too. So I made it into a book. It took me about 10 months total to write it and publish it on my own. It's called, "How to Exercise a Thoroughbred Race Horse."

FOTH: I think was a neat idea now before we go any further is the book still for sale and if so how much is it and where can someone get it?

JB: Yes, the book is for sale on my website: Janice L. Blake.com or they can write to me at [email protected] and I can send them one that way.

FOTH: How has the response been to it?

JB: I always sell a few every month. I don't advertise or talk about it that much anymore but the sales keep coming in. There is interest in the subject, which pleases me and tells me to keep writing.

FOTH: Great now do you feel jockeys as a whole are under appreciated in the world of sports?

JB: Absolutely. They don't have enough sense to hire a PR manager and the race tracks don't either. They are a mine just waiting to be discovered. They are underrepresented by their agents and are not capitalizing on their visibility or the interest people have in them. They should be like race car drivers, but nobody knows about jockeys. If I were a higher profile jockey, I would have a clothing line by now!

FOTH: I agree now what did you think about the sport having a Triple Crown winner not too long ago? Did you think we would ever see one?

JB: I thought it was a great day! And what a horse! I was very happy to see that. I read a story that Baffert was going to take Victor off the horse because he was hanging out with too many Hollywood people and dancing on the show. He was just jealous it wasn't him. Can you imagine taking the jockey off the Triple Crown winner? What an ass. People get very jealous of jockeys.

FOTH: Now do you follow any other sports or are there any other athletes, besides jockeys of course, you admire?

JB: I always liked Muhammed Ali. I admire the Williams sisters of tennis. I enjoy watching baseball. I like to see the guys running the bases. Ha, ha! Other than that, I don't follow sports much.

FOTH: Could you see yourself being a horse trainer or owner one day?

JB: Yes, I can see that. NOT a public trainer.

FOTH: Got ya. If a young girl came up to you and said she wanted to become a jockey what advice would you give her?

JB: Find an owner or trainer with many horses and work for him. A jockey needs a barn to get behind them and put them up no matter what everyone else says.

FOTH: Janice thumbs up as always for your time and doing this interview any last words to wrap this up?

JB: The industry has to change and treating the horses better is issue number one. Treating them like commodities and machines is over. Factory farming of horses and all other animals has seen its day. The end is near for trainers having 120 horses under "their" care.