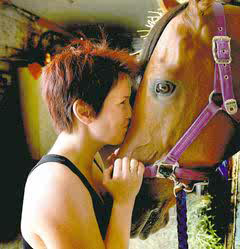 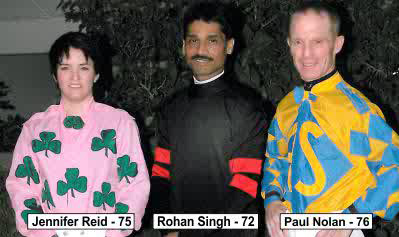 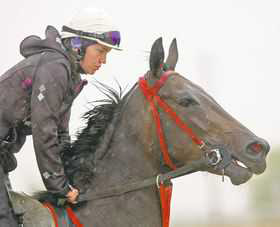 Jennifer Reid is a jockey that mostly rides in Canada, but has made the trip to the US and rode at Turf Paradise. Well here is her story:

JR: I was born in Edmonton, AB Canada. I grew up from kindergarten to grade six in Three hills AB, and then moved to Melfort SK to finish grade seven through twelve.

JR: I have a sister and two brothers. I always active, always outside playing with my horses and dogs.

JR: I wanted to be a horse trainer when I was growing up. I started riding when I was six years old, competing in gymkhanas and barrel racing.

JR: Horses have always been in my life. Everyday evokes around horses for me. I remember watching the Triple Crown and being amazed at the jockey’s ability to make their horse run from a little push on the neck or a tap with a whip.

JR: I took a course at Olds College called the Exercise Rider and Jockey program. I had zero horse racing experience before then. They taught us how to gallop race horses, groom them, taught us about legs and in general the racetrack.

JR: Before I took that course as Olds College, I had applied for the Horsemanship Major in the Western Discipline but was put on the wait list so I saw this Exercise Rider and Jockey Program and thought "why not try this" and got into school and then eventually started riding. Everyone that I around was very supportive and my mom and family to this day still watch me race and thinks it’s exciting as the first time.

JR: The first time I got up into two-point was a little scary, seeing the ground rush by you. It was really natural and easy for me to learn how to gallop. Learning to race ride is a lot more harder than a person thinks. Real Simard is an awesome teacher. He was an instructor at the college for this course. The way he explained everything made it seem all so easy. Everything takes time, patience and a lot of practice.

JR: Exciting and nervous all at once.  I started soon after that.

JR: My first race was at Northlands Park on September 16, 2009. I was very nervous, and everything was so slippery. I finished 4th.

JR: My first win was in Lethbridge Ab, at Whoop Up Downs ( bush track) on Leos County Cat for Tom Rycroft. It was awesome, in disbelief that I had won it. I know I had a huge smile on my face.

JR: A pale of cold, cold water was thrown on me.

FOTH: What tracks have you rode at so far in your career? I’ve ridden at Whoop Up Downs, Grand Prairie bush track (can't remember the name of it), Northlands Park, Assiniboia Downs, Marquis Downs, Woodbine, Fort Erie, and Turf Paradise.

FOTH: Now I know you are riding at Assiniboia Downs currently. Is there any other female riders there and for those who have never been there was it the track like?

JR: Currently I’m the only female rider here so far but there is talk of a couple more coming here to ride. Assiniboia Downs is a 6.5 sand track. There are two tracks the main, which is 6.5 and we race on it. Then there is a training track that is roughly half a mile. We also have a kitchen, where owners and trainers can drink some coffee and watch their horses gallop. Then there are numbers barns spread out around the backside.

JR: I was riding all winter so I would get up early about 5:30am, eat a small breakfast then head to the track. I would arrive at the track about 6:30, once I had my gear on, helmet and flak jacket, I’d call or text my agent and ask if I had horses lined up to breeze. Usually we discussed how busy and which barns to go to. Then I biked around the backside either heading to a barn and trainer to breeze a horse or to stop in and say hello the trainer and crew. I would do that for a few hours, and then meet up with my agent and we would discuss how the morning had gone. Then I would head home, for either a quick nap and shower. Then drive back to the track to the jocks since it was day racing in Turf Paradise. Then get ready for races.

JR: I read a lot books, play video games on the x box, nap whenever I get a chance, hang out with friends.

JR: I’ve become a patient rider. I love nailing them at the wire for the win. :)

JR: I would like to ride for as long I can, as long as my mind and body are willing to do it. I just want to be a good rider, successful at my career.

FOTH: Have you ever ridden in the US and if you haven’t would you like to ride there one day?

JR: I rode in Phoenix, AZ at Turf Paradise. It was my first season there, win 27 races. Absolutely loved it! Can’t wait to go back.

FOTH: Is there a lot of racetracks up in Canada and is there any sports that you follow at all?

JR: There is at least one racetrack in every province, either "A" or "B" tracks. I follow Northlands Park and Woodbine.

JR: As a female in any career you have so much more to prove, that you’re able to do it better than the males. So being in a male dominated sport just makes you work a little harder, push for a little more, demand more of yourself than maybe the guys would. A 100% isn't good enough, only 110% is acceptable for me

JR: I’ve had a concussion, and a black eye from clipping heels in a race. So far, fingers crossed, that’s been it. Everyone you get on a horse there’s always a chance of you getting hurt. You know you’re going to get hurt, that’s a fact, and it’s just a matter of when and how bad. That’s just a realistic point of view.

JR: I will always be involved in horse racing in some form whether it’s riding, grooming, training, owning. Even doing a stall…This is my life, my passion for forever.

JR: Thumbs UP!!! Thanks for the interview Chris :) Greatly appreciate the recognition of my hard work; it’s starting to pay off. :)