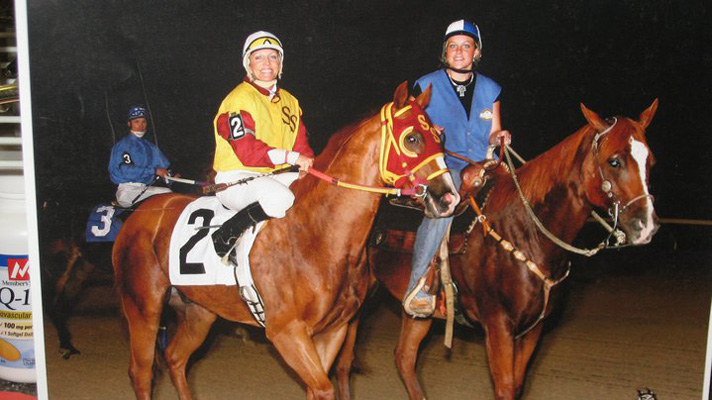 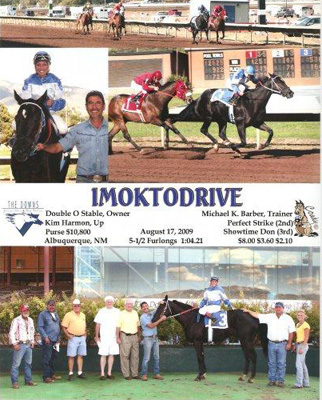 Kim Harmon has been a jockey and trainer for over 30 years!!! I recently emailed her some questions and here is what she said to the questions that I posed to her:

KH: I WAS BORN IN CASPER, WYO. AND GREW UP THERE TILL I WAS 14 THEN MOVED TO AZ.

KH: I WAS DEFINITELY A TOM BOY THAT LOVED TO BE OUTDOORS WITH THE HORSES.

FOTH: Were you into horses at a young age or did that come later?

KH: IT SEEMS I LOVED HORSES FOR AS LONG AS I CAN REMEMBER I GREW UP ON THEM.

FOTH: What did you think of a racetrack the 1st time you saw one?

KH: I WAS MESMERIZED I WAS 12 AND KNEW AT THAT MOMENT I WANTED TO BE A JOCKEY.

KH: GOING TO THE CASPER WYO. STATE FAIR AND RODEO AND HORSE RACES AT THE SAME TIME AND ME AND A GIRLFRIEND WERE RUNNERS FOR THE JOCKEYS TO GET FAIR FOOD FOR THEM AND I THOUGHT THEY WERE GOD AND THAT IS WHEN I DECIDED I WANTED TO BE A JOCKEY.

FOTH: Did you have somebody teach you how to ride or did you learn a lot by yourself?

I ACTUALLY HAD NO ONE AROUND TO TEACH ME SO I TAUGHT MYSELF BY OUTING TWINE FROM THE HAY AROUND MY STOCK SADDLE HORN AND PUTTING MY FEET IN THE LOOPS SO MY LEGS WOULD BE UP HIGH LIKE I SAW THEM RIDING AND THAT IS HOW I RODE ALMOST ALL THE FROM THEN ON.

FOTH: Did it feel natural getting up on a horse for the first time and were you nervous at all?

KH: I HAVE NEVER BEEN NERVOUS GETTING ON A HORSE THEY WERE MY BEST FRIENDS GROWING UP.

FOTH: What tracks have you rode at so far and how long have you been riding for?

KH: I HAVE RODE AT UTAH, AZ. CANADA ,TX. NEW MEXICO, LA. I HAVE BEEN RIDING AND ALSO TRAINED FOR 33 YEARS.

FOTH: Tell me about your 1st win and what was it like jogging the horse back to the winner's circle?

KH: MY FIRST WIN IS HARD TO DESCRIBE YOU REALLY CAN’T EXPLAIN BUT I KNOW AFTER THAT I WAS HOOKED.

KH: YES THEY GOT ME REAL GOOD AND I DIDN’T EXPECT IT I GOT LEATHER DYE DUMPED ALL OVER ME.

KH: WELL I AM FIFTY NOW SO I WISH I COULD RIDE FOR A LOT LONGER BUT I AM NOT SURE HOW MUCH LONGER I WILL RIDE I WILL LEAVE THAT UP TO GOD.

KH: GET UP AT 5 AM TO BE AT THE TRACK BY 6 AM TO START EXERCISING HORSES. AND FINISH AT TEN AND THEN ON RACE DAYS GO HOME FOR A LITTLE REST BEFORE HEADING TO THE JOCKS ROOM TO RIDE AND GET UP AND DO IT ALL OVER AGAIN THE NEXT DAY.

FOTH: Looking back was becoming a jockey easier or harder than you thought it would be?

KH: IT WASN’T HARD FOR ME BECAUSE IT WAS WHAT I REALLY WANTED SO I JUST DID IT.

FOTH: What is the toughest and easiest thing about being a jockey?

KH: THE TOUGHEST THING FOR ME WAS I DON’T THINK I GOT THE SAME OPPORTUNITY BECAUSE I AM A WOMEN AND THE EASIEST THING IS BEING GOOD ON A HORSE AND HAVING GOD GIVEN TALENT.

FOTH: Tell me something people might funny about yourself?

KH: I DON’T KNOW MAYBE I LIKE TO JOKE AROUND AND CUT UP AND TRY TO MAKE PEOPLE HAPPY.

KH: I REALLY LIKED TAKING MY GIRLS TO RODEO’S WHEN THEY WERE GROWING UP AND I LIKE SKIING AND ALL KINDS OF OUTDOOR SPORTS

FOTH: Have you had any injuries and if you did what was the worst one?

KH: I HAVE HAD A FEW INJURY’S AND ACTUALLY I AM RECOVERING FROM MY WORST ONE RIGHT NOW I GOT FLIPPED ON IN OCT. 09 AND SNAPPED MY LEFT LEG AND HAD ROTOR CUFF SURGERY.

FOTH: Do you have any goals for yourself as a jockey?

KH: I HAVE BEEN BLESSED AND AM THANKFUL FOR ALL I HAVE RECEIVED.

FOTH: If you could change a couple things about the sport, what would they be and why?

KH: IF IT WAS POSSIBLE IT WOULD BE BETTER IF TWO YEAR OLDS COULD WAIT TO RACE WHEN THEY ARE THREE.

FOTH: Do you think you have been treated pretty fairly as a jockey so far?

FOTH: Kim I am out of questions. Thumbs up for the interview.

KH: THANKS FOR THE INTERVIEW AND GOOD LUCK WITH THE SITE.