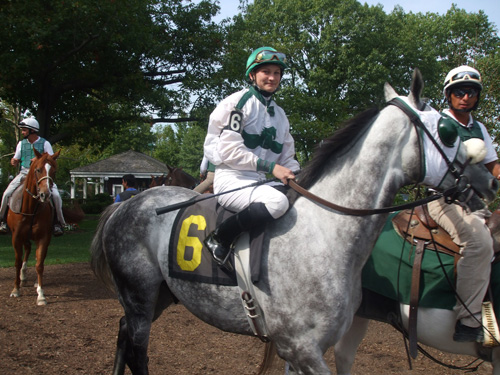 Carie Kifer is a young girl I got to know during the winter of 2007 at Phila Park when she was an ex-rider for Pat Mcburney. That summer she became jockey and I recently got her on the phone before she went out to shop ha ha and this is what she said to my questions I asked her:

FOTH: As a young girl did you know you wanted to become a jockey or was that something that was the farthest thing from your mind?

CK: I was always interested in doing something with the horses ever since I was like in grade school. I don't recall, but I did have a 2nd grade school yearbook where they had a section to put what you wanted to be when they grew up and I put I wanted to be a jockey. I didn't realize it at the time and then when I was 10 I started doing show horses and jumping. After I finished school I starting galloping to pay my bills.

FOTH: Were your parents supportive of you when you were young as you said you got into show jumping and stuff like that.

CK: They were supportive of the show horses, but not racing. They were like do whatever makes you happy.

FOTH: Have they ever seen you race live?

CK: Yes. They actually flew up and watched my 3rd race. They were actually at Tampa when I won my first race.

FOTH: Now when you were doing the show horses did you have it in the back of your mind that maybe you entertained the thoughts of becoming a rider?

CK: When I was doing the eventing I was thinking about becoming a trainer and this and that. It is a lot tougher than it looks working with those show horses. Race riding you can do something you love and support yourself and with show horses you can't do that.

FOTH: Looking back was becoming a jockey harder or easier that you thought it was going to be?

CK: It was easier than I thought it would be.

FOTH: Do you feel so far you have been treated pretty fairly as far as a jockey goes?

FOTH: What tracks have rode at so far?

CK: I have rode Monmouth and The Meadowlands when I started out and then Tampa Bay Downs. I also have rode at Phila Park (which she won-cf), Penn National, Delaware Park and I just got my license down at Laurel and rode my 1st race down there a few days ago. Whether I go to Phila Park or Laurel Park I would like to go to the other when one of the tracks is dark if possible.

CK: Yeah. I spent the winter galloping so I would be ready when Monmouth opened.

FOTH: Tell me a little about your 1st race. Was that at Monmouth or Tampa?

CK: It was at Monmouth.

FOTH: Were you nervous at all walking out to the paddock and was it for Mc Burney your 1st race?

FOTH: Now when you were exercising horses and stuff, did you have Pat McBurney and John Forbes teaching you how to ride or was it a lot of it you being self taught.

CK: Yeas everybody in his stable was supportive. I broke babies for 3 years in Ocala and there was ex jockeys there and they taught me a lot as well, helping get the babies ready and breezing them.

FOTH: Tell me a bit about your 1st win. Was that at Tampa Bay Downs?

FOTH: Did you know when you cross the finish line that you had won the race or did you win in a photo finish?

CK: I won by like 6 lengths. The whole time I kept saying who is gonna catch me, I guarantee it, and that somebody was gonna catch me before the wire. (laughs)

FOTH: What was it like jogging the horse back to the winner's circle knowing that you had just won a race?

CK: I was ecstatic. My parents were there to see it, I was like on my god. The horse's name was Nav Quatorze.

FOTH: Obviously you know about the jockey initiation after the race. How bad did they get you and did you know it was coming?

CK: I knew it was coming. (giggles) They got me as I was walking back to the paddock actually and they got me with a lot of water buckets. The water was very cold. They had mustard, some kind of power too.

FOTH: Your riding down at Delaware right now and you said you probably will go to Laurel after that. Do you see yourself riding after your apprenticeship ends?

CK: Yes. I am pretty happy and take it easy and try to get in with the better trainers and I exercise horses for Michael Matz in the morning (that is who she won for up at phila park-chris).

FOTH: Now do you watch race replays and see what you did right and maybe wrong and listen to advice from other jockeys?

CK: Yes. Rosemary sits in the room with me and we go over the replay and she tells me what I need to work on and what I did good.

CK: I get to the track at about 6:15 am and I get on about 8 or 9 horses for different people in the morning. With me not having an agent right now I try and see as many people as I can.

FOTH: Have you been injury free to far as far as riding goes?

CK: Yes. Any injuries I got was when I was working with show horses.

FOTH: Do you have a favorite horse you have rode so far?

CK: I kinda have 2. I have one horses I rode him 10 times and I broke my maiden. That horse is kinda my favorite and he is up at Finger Lakes now and there is one I won on a couple weeks ago for Mike Canalano, he won by 15 1/2 lengths and we are looking for another race for her. I really like her.

FOTH: I know Delaware Park has the Arabian races. Have you ridden in any and if you have do you mind riding them cause they are a bit slower and do you have to approach riding them differently than say a thoroughbred?

CK: Yes I have and yeah they are a bit more slower and more sensitive and emotional. I actually got my 5th win on an Arabian. I enjoy riding them, but not as much at thoroughbreds.

FOTH: Do you prefer the dirt or the turf or it doesn't matter to you?

FOTH: Do you feel with being a female jockey that you have to work that much harder to get respect from some of the trainers?

CK: Well when I first started riding I thought it would be an issue, but I don't think that is a big of an issue as it used to be. I mean there is 3 girl riders here at Delaware Park and Anna Napvarnik and Rosemary are in the top 5 and Anna is hurt right now. I just think there is more male riders than female riders.

FOTH: When you retire as far as being a jockey goes, do you see yourself always doing something with horse racing whether it is becoming a trainer or say an ex-rider?

CK: I just would want to ride. I don't think I would like the responsibility of training a horse. After I finish my apprenticeship I am going to finish college the same time as I am riding. Unless I have a serious injury then I will have to face reality. I want to go to college to have something to fall back on. I might be a 140 pounds in 20 years. I would like to ride for as long as I can.

FOTH: I have a couple more questions and then I will let you go shop ha ha. Have you ever been recognized outside the track?

CK: Nope not yet.

FOTH: Carie that is all the questions I have for you and have fun shopping and any last words.

CK: I can't think of anything else. If you have any other questions just call me back.