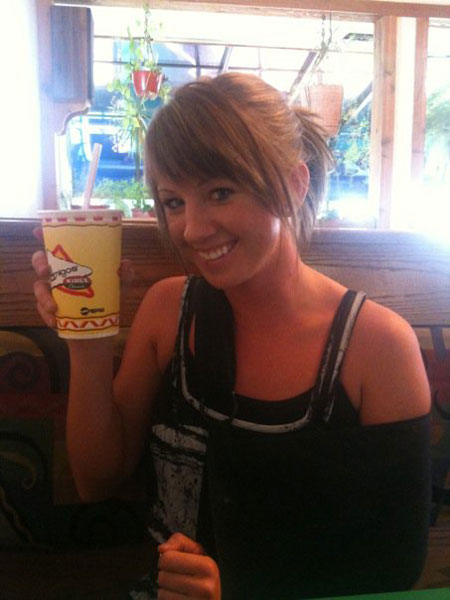 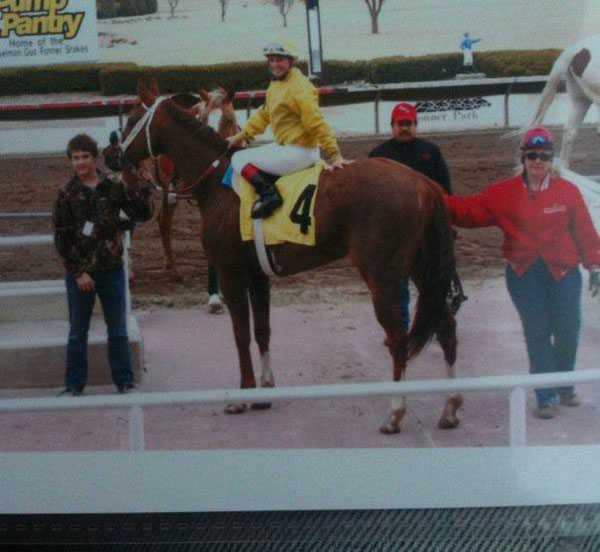 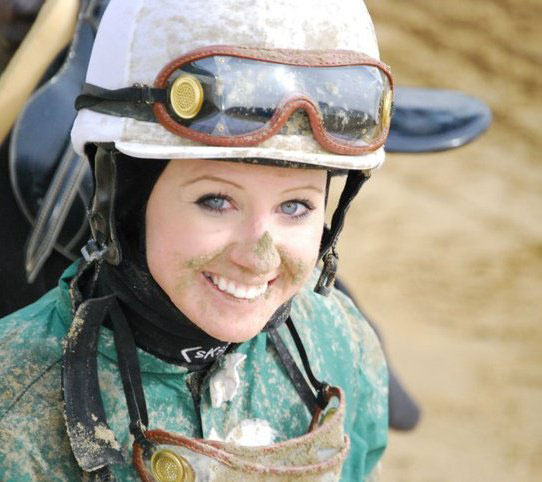 Stephanie Korger is a young jockey I met not too long ago who is riding around the PA, MD area and I emailed her some questions and here is what she said to them:
FOTH: Where were you born and where did you grow up?


SK: Born and raised in Columbus, Nebraska
FOTH: Did you always have a love for the horses at a young age?


SK: I did- ever since I was little I always loved them.
FOTH: When you first saw a live horse race, what did you think of it?


SK: I loved it! My family would go to the racetrack in my hometown a few times during the 2 month meet-as my passion and knowledge of the sport grew, my trips became much more frequent.
FOTH: At what age did you kinda think about being a jockey?


SK: As long as I can remember I always wanted to be a jockey.
FOTH: What did you parents think of the idea when you told them?


SK: They thought it was terrifying at first- they weren't horse people at all, simply spectators. But I was very persistent with the idea and they saw my love for the sport- so they were extremely supportive.
FOTH: Did you work on a racetrack before you became a jockey? If so, what jobs did you do?


SK: Oh yes! I started off scrubbing buckets and walking hots, then groomed and ponied for a while before galloping and breezing horses. At one point I had 4 head I was grooming & galloping for a 40 horse stable in the mornings, then would pony almost a full card in the afternoons.
FOTH; What event or events led to you becoming a jockey and what was the feeling like when you had that license in your hand?


SK: My step dad, Allan Hill, was a jockey for years- he took me out to a farm in Nebraska and taught me how to gallop. It was the same farm my step brother, Channing Hill, learned to ride at. I started working horses for different trainers when I was finished with my gallop job in the mornings, just trying to get as much experience as I could. I ended up getting my jocks license while riding a horse named Irish Edition (trained by Sean Foley) who I ended up winning a race on a few months later. It was such a great feeling- way better then getting my drivers license!
FOTH: Did you have many people help you or did you learn a lot on your own?


SK: I had SOO many people help me- my step dad and step brother were huge helps. There were a lot of trainers back in Nebraska that were very willing to help me out- giving me good horses to work even though I was very green.
FOTH: Tell me about your 1st race and were you nervous at all? What was it like sitting in the jock's room after the race was over?


SK: It was in Columbus, NE. The track there is called Agriculture Park and it's a 5/8 bull ring. I think my family and "fan club" filled up half the grandstand! The horse was named Maybe Priceless- Sean Foley was the trainer and made sure she and I were a good match- I had been getting on her for awhile in the mornings so I knew her really well. She was great to be on- did everything right and took good care of me. I wasn't too nervous- just REALLY excited. But once I was loaded in the gates, I had a "there's a no turning back now!" moment. I got bumped REALLY bad at the start- but other than that, it was great. We ended up 5th. I was all smiles in the jocks room afterwards- had my eyes glued to the screen during the replays. I'm surprised I didn't sleep in my silks.
FOTH: Looking back now, was becoming a jockey easier or harder than you thought and what was the toughest thing you had to do?


SK: It's a lot harder then I ever imagined. It's really a life style- not a job. You have to be dedicated 24 hours a day...but it’s worth EVERY second. The toughest thing was moving away from my family. I talk to my parents almost every day- and still get homesick once in awhile.
FOTH: Tell me about your 1st win. Where was it at and what was it like going the horse back to the winner's circle?


SK: It was at Fonner Park in Grand Island, NE- another 5/8 bull ring. The horse was Fast Burning Flame for trainer A.J. Musquiz. He paid $47 to win. I was a little nervous going out there because the horse didn't have the best reputation- but A.J. assured me the day before that he had been working with him and he was going to be fine. He was great....we won by a head. I wasn't even sure I had won- had to ask the outrider if I won or not! I was so happy...such a surreal feeling. The trainer was SOO happy too- he had really put a lot of work into the horse. A very rewarding experience for everybody involved.
FOTH: Did the jocks get you good after the race and did you know it was coming?


SK: I tried procrastinating as long as I could before going back to the room...was hoping I could sneak in while they were checking- I wasn't so lucky. They got me GOOD and somehow got a lot some liquid dish soap down my pants (not sure who did they yet, but when I find out- they're in for it! haha)
FOTH: Now I know you rode at Prairie Meadows for a bit. What made you decide to come east?


SK: I rode at Prairie Meadows for a few months and ended up getting hurt. I had originally planned on going to Remington and then down to Oaklawn after. The whole time at Prairie Meadows- Kenny Washburn (an agent) & David Mello (a jockey who rode out East) kept telling me to go out East, but I didn't really look into it considering I made plans already. Well, I ended up being on the injured list a lot longer then expected- spent a lot of time watching TVG and HRTV and saw how well apprentice and female riders did out here. Made some phone calls, found a great agent and made the move!
FOTH: What tracks have you rode at before and do you right now have a home based track?


SK: I've ridden at three tracks in Nebraska- Agriculture, Lincoln, & Fonner (all 5/8 bull rings) and Prairie Meadows. Since coming out east, I've been riding mostly at Laurel, Penn National, & have ridden a few times at Parx and Charles Town.
FOTH: How long would you like to ride for?


SK: Riding is something I'd like to see myself doing as long as I can....I don't want to do anything else.
FOTH: How do you prepare for a race and do you follow the same sort of ritual before you ride?


SK: The only real preparation I do is study the form....I go through and make notes on all my races- study every horse in the race, not just mine. I like to go into it knowing as much as I possibly can. I also have a RaceReplays account that I can watch previous races of my horses- that helps me a lot too.
FOTH: What advice would you give to a young girl if she wanted to become a jockey?


SK: Study & Listen! Keep your eyes and ears open. I've learned so much from just watching races- whether it be live in person or simulcast, or old replays. Learn as much about the game as you can. And never lose your drive and determination. If you want something- go for it! You are the only person who decides how your story goes.
FOTH: Take me through a typical day?


SK: Well, it's been a lot of driving lately. Each day is different, but on a BUSY day I will find myself working horses at Delaware Park, driving to Laurel to ride the afternoon and then rushing to Penn to ride at night.
FOTH: What are some things you like to do when your away from the track?


SK: I'm pretty laid back- I don't really do a whole lot. If I get a day off I usually spend it relaxing at home and catching up on my laundry (it never ends!)
FOTH: Is it tough watching your weight at all?


SK: I'm really lucky and it's not something I have to worry about too much. I'm pretty little. Which is good for me because I LOVE to cook and bake.
FOTH: Do you have a favorite horse or trainer that you ride for?


SK: My favorite is of course Fast Burning Flame- my first winner! And my favorite trainer is whoever I'm riding for at that moment..haha!
FOTH: If you weren't a jockey, what do you think you would be doing with your life right now?


SK: I went to cosmetology school after high school- so I'd probably be cutting hair
FOTH: When your riding a race, do you ever get to hear the announcer when your out there?


SK: Personally, I don't hear anything outside of the race. I don't hear the announcer or the crowd- I only hear the horses and riders that are out there.
FOTH: (funny question) When we finally get a pic together what will you be doing in the pic?


Sk: THUMBS UP!!!! of course :)
FOTH: About how many pairs of goggles do you go through in a month?


Sk: I'm going to be honest- I am CHEAP. I will wear goggles until they are literally falling apart, so not that many!
FOTH; How do you prepare to ride in the cold?


SK: It doesn't bother me a whole lot. Growing up in Nebraska got me pretty used to it! I usually go out without gloves...unless its really cold.
FOTH: Steph, I am out of questions. Thumbs up for the interview, any last words you want to say to wrap this up?


SK: I think we got it covered- hopefully it’s the first of many more!