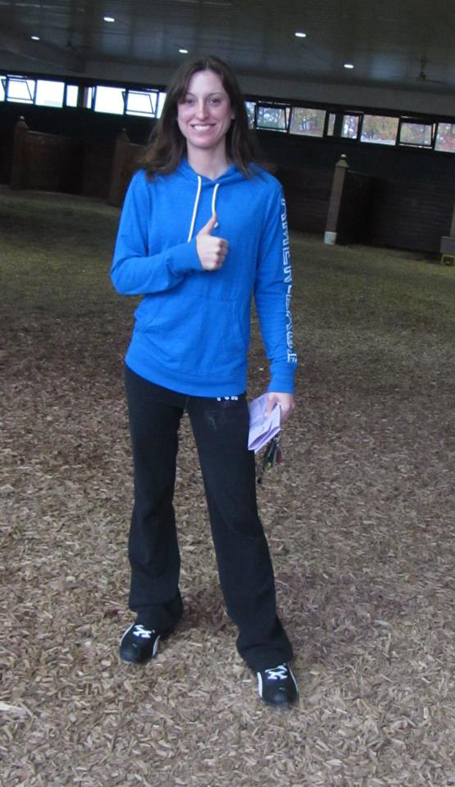 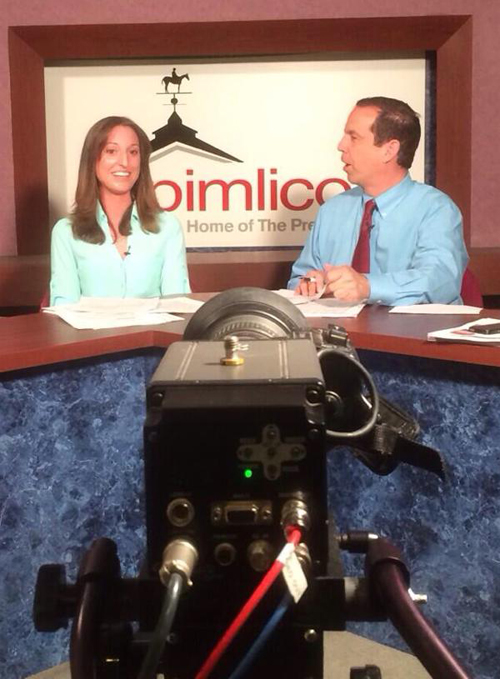 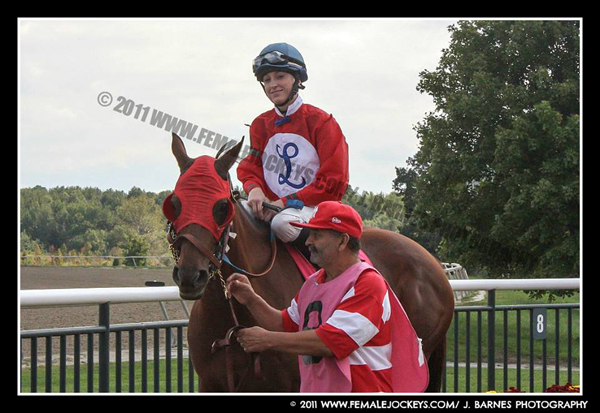 I have known Kristina Mcmanigell for a few years now and was sad to read that she was forced to retire due to an injury. Since her interview on this site is a few years old now I thought it would be cool to do a new one about her retirement and her plans going forward and here it is:

CF: Just recently you decided you were not going to ride anymore due to a hip injury. When did you sustain this injury and how tough was it you for to decide to hang up your riding boots and now that it has been a little while, do you still miss riding much?

KC: The doctor told me that my hip was a combination of the many major spills I had throughout my career and partially because I was born with bad hips.  The only reason I decided not to go back riding after that was based on the advice of my doctor; I listened for once.  My new hip is ceramic, which is stronger than bone.  So if I were to have any accidents such as what I have already experienced, my leg would shatter - the ceramic goes halfway down my leg.  Not only that, but they said my right hip would need replaced before long if I went back to riding.  So for the first time ever throughout my career, I thought about my health and safety.

CF: If you did not sustain this hip injury, did you have any idea how much longer you were going to ride for?

KC: Much longer than this lol.

CF: You rode at parx racing for a number of years, around how many times do you think you put your thumb up for a certain somebody ha ha?

KC: Too many to count lol

CF: Looking back how would you rate yourself as a rider and did you have a favorite horse and/or trainer that you rode for during your riding career?

KC: I felt like I always gave 150% to every ride, no matter the odds...I wore my hips out, come on lol. An honest rider, and loved that left handed stick.  Good out of the gate, but preferred those come from behind horses.  My favorite horse had that same running style, Smarty Slewy, who is actually in my backyard right now as we speak lol.  I always kept an eye on her during her career after we parted ways; we were an excellent team at Parx back in '12.  She broke down this summer, I found out she would be ok but had a career-ending injury, so I gave her a home. We have two similar stories lol.  Favorite trainers... So many come to mind, but among that list would be Richie Vega, Penny Pearce, John Rigattieri, the list is long.

CF: Also looking back what was the hardest thing about becoming a jockey and was there any one thing that you thought was going to be hard, that was actually in reality quite easy?

KC: I would say the injuries and the mental frustration that came with that.  I was unfortunate in the fact that I was sidelined regularly due to injury.  It was always at a time when I was doing really well, and then I would get hurt.  So when I would return from my injury, I would have to start all over again, building my business back up.  Very frustrating.  I didn't mind the physical pain nearly as much as the mental anguish.  What was easier?  I used to be a very shy and quiet person, and because of riding and going out in the morning selling yourself as the best jockey for the job, I got over that quickly lol.  I'm very outgoing now because of that.

CF: What was your favorite track you rode at and did you think of turf racing?

KC: Saratoga is fantastic, jockeys are celebrities at that track; a security guard escorts you back to the jock's room.  Laurel and Pimlico were my favorite tracks to ride at regularly.  Turf riding is different, you ride tighter and closer, which doesn't leave much room for error.  I love riding on the turf with a group of older, professionally riders.  Colonials Downs was awesome.  But when you get on the turf with a bunch of young kids, you make sure they know where you are lol. I sound like I'm old lol.

CF: Speaking of turf racing, what are some of your memories of riding at the Atlantic City Race Course Turf meet and was the turf as great as they say it is?

KC: The turf at AC is excellent!  Really cool place, always get a good crowd, and we always had lots of pictures. ;)

CF: What advice would you give to a young girl who wanted to become a jockey?

KC: Go to the North American Racing Academy.  As a jockey, you live, (don't) eat and breathe it, you miss thanksgiving with family, chances of paralysis and death are staring you in the face every day, you have to want it so badly that nothing deters you. Be as fit as you possibly can be.  Be as mentally tough and prepared as you can be.

CF: Looking back was being a jockey what you thought it was going to be and did you ever have any problems with your weight while riding?

KC: It was more challenging mentally than I ever thought it would be.  It was so incredibly satisfying however, when you work hard day in and day out, and then you go out and win 3 races in a day, or you bring in a $100 winner...those moments make all the hard work worth it.  So many good memories.  Yes, maintaining 113lbs was tough, that's what I kept my weight at most of my career after I lost the bug.  I'm 5'6, I'm at 125 naturally, before I rode and I'm at that same weight now.  It's weird to be able to eat and not worry, the habit is hard to break, so I still watch what I eat.

CF: Tell me a funny jockey, story and you can leave names out of you want?

KC: Hmm... At Parx, sometimes two of us would be trailing the field, (thankfully this didn’t occur often lol) and we would bet the other a coke, whoever lost had to buy the other jock a soda lol.

CF: While riding, you rode in a female jockey challenge at Parx. How fun was that and do you think tracks should do stuff like that to attract new fans?

CF: Don’t you miss getting up at the crack of dawn in the middle of winter to go exercises horses in the morning these days ha ha?

KC: lol well I definitely do not miss that part of it!  I do miss it though.

CF: Now you’re still involved in the horse racing industry even though you are not ring. Tell everybody what you are up to these days?

KC: Well, starting up on December 2nd, Mike Penna and I will be hosting a new radio show, Jockey Talk.  That will air on the website, www.horseracingradionetwork.net from 6-7pm ET every Tuesday.  I worked with TVG at Keeneland, which was very cool.  Starting up in January I will be helping teach at the North American Racing Academy, the jockey school I learned from, which is pretty cool, really looking forward to that.

CF: I understand you work with horse California Chrome’s people at Pimlico during the Preakness Stakes. What was that experience like?

KC: The Preakness was awesome; I was up on the roof for the big race, cool to get that view.  The connections of California Chrome were all very nice and respectful.  I know Willie Delgado, his exercise rider from Maryland; he used to gallop one of the nicest horses I used to ride as well.  When I saw the connections again at the PA Derby dinner, they were again very nice, immediately remembered me from Maryland.  Sometimes in the heat of the moment we react inappropriately, I do the same, but they are good people.

CF: You have also worked as a racing analyst several times. Tell me more about this and what has this experience like so far is that something you would like to do full time in the future?

KC: I really enjoy it.  I would always thoroughly handicap the races when I rode, so I use that same riding method of handicapping, to see how the race will set up, and who will get the pace advantage.  I'm definitely keeping that door open, I do that part time now, and enjoy it very much.

CF: What are some things, in your opinion of course, you think that can draw more people/fans to racetracks on a daily basis and not just big race days?

KC: Get a band to come out and perform at the races (far enough away from the horses lol), a small circus for the kids, twilight racing and $2 drink specials...just more marketing and events to draw people in, in my opinion it isn't that difficult, but a younger crowd needs to be the target.

CF: Do you think racetracks pretty much have to rely on having a casino attached or involved with it to survive these days?

KC: I love how Maryland is operated; the casino is not on track property, but the horseman still benefit.  Any other way, with the casino on the grounds or no casino, I think both are a no win situations.

CF: What are some hobbies and things you like to do when you are not doing horse related stuff? If there any sports that you follow and have you gone to any sporting events?

KC: I play soccer a little bit, of course a huge fan of UK basketball. :) Kayaking, hiking, and camping.  Of course going out with friends, and I get to hang out with my brother and sister much more now.  I play the piano, go to concerts, music is big.

CF: Do you ever get nervous getting ready to go in front of the camera or since you have done a few times now, that it just comes naturally now?

KC: In the beginning I was nervous, but as I said before, I used to be shy as well, and we all know I'm not shy anymore!  Definitely getting used to it now; the hardest part was actually having that ear piece and the producer talking in your ear while you're speaking, you have to multi-task and focus lol.

CF: Will we ever see a Triple Crown winner? Why or why not?

KC: I hope so; we've been close several times in my recent memory.  I think it is possible.

CF: Now I am talking about a few years from now, if asked, would you ever be able to ride in a retired jockeys race if ever asked or is that not ever possible?

CF: Would you ever consider becoming a trainer or an assistant trainer on day if the opportunity presented itself to you or that is something that does not interest you at all?

KC: That is not something I really want to do.  Riding is all I ever wanted to do, and the closest thing next to that is teaching other riders or getting in the minds of jockeys and handicapping and telling the world what they are thinking.  That's all good for me. :)

CF: Kristina good luck with everything in the future, thumbs up, and any last words you want to say to wrap this interview up?