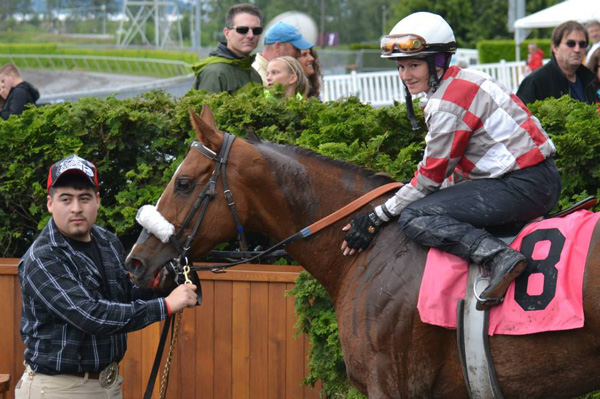 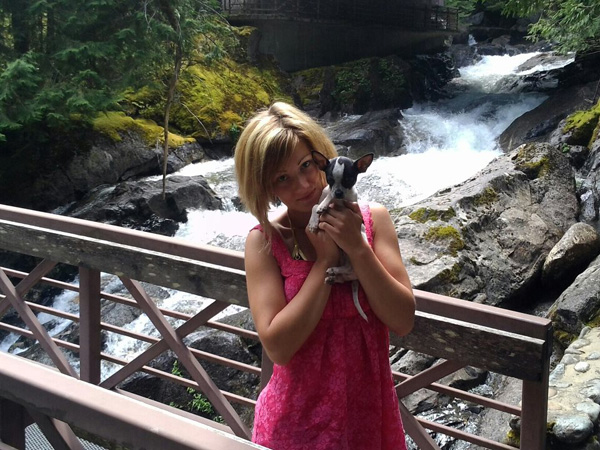 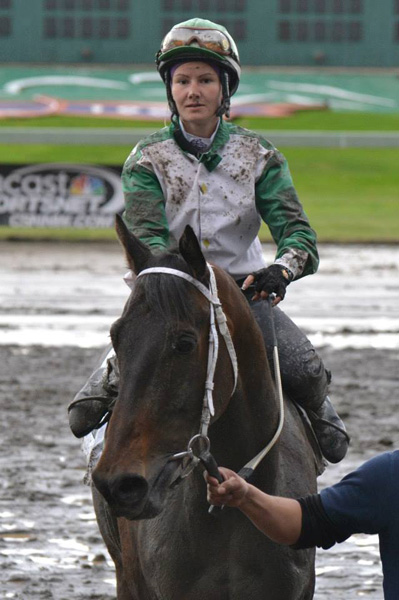 Eliška Kubinová is currently one of the many female jockeys riding at Emerald Downs and this is here is her story and it is a goodie:

EK: I was born in Czech Republic, in a beautiful small town called Jeseniky. It’s a recreational area with mountains to ski on and spa to relax. I grew up there and lived there until I was 15.

FOTH: Did you come from a big or small family and what sort of girl were you growing up?

EK: I grew up with my mom, my half-brother and half-sister. I was always very ambitious and competitive and I always had to stay busy. I did little gymnastics, in gym as well as on a horse back :), I use to dance acrobatic rock and roll, I played piano, tried to snowboard. I always had to try everything. I always loved to learn something new. But I was told that I am too small to ride a horse and to come back when I turn 10 :-)

So I had to wait for something I really wanted to do.

FOTH: As a young girl, what did you want to be when you were growing up?

EK: I wanted to be independent and happy I wasn't really sure in which area.

FOTH: Did you as a young girl ever attend a racetrack and if you did what did you think of it or the 1st time you saw a live horse race?

EK: No, the first time I saw a live horse race was when I was already enrolled in jockey school. I'm not sure what I thought of it. :)

FOTH: At what point in your life did you think about being a jockey and how long did it take from you first seriously thought about it, did you actually become one?

EK: The first idea came from my mom when I was deciding where to go to school. I was considering some architecture school and business school when she came up to me with all these papers about our jockey school and I thought "wow this is really cool I gotta try! " :) so it only took me little over a year to ride my first race..

FOTH: Take me through the steps of becoming a jockey?

EK: Attending a jockey school is probably one way to become a jockey. And since I didn't grew up around the race track it was the only way for me... The school was for 3 years, I rode 15 races and it probably gave me the very basic idea what it’s like to be a jockey. But even after that I didn’t feel ready to become a jockey and so I went all over Europe and learned some more while galloping for different trainers in different countries and I was still far away from being a jockey.

FOTH: I imagine you got a job on the track and began galloping horses with the end result of you becoming a jockey. Who first put you up on a horse and did it feel natural getting up on a horse?

EK: This question is not quite made for my case but the very first trainer who put me on a horse in Emerald Downs was Doris Harwood. She helped me got licensed for galloping and she put me on few horses to get fit because I had little break before coming over here.. Then I met Dan and Ryan Kenney and they let me get on bunch of horses galloping at first than working and they came up with the idea that I should start riding here.

FOTH: Now did you have somebody teach you how to ride and take you under his or her “wing” so to speak?

EK: At the most it was the Kenneys who help me thru the beginning and my fiancée- jockey Jorge Rosales who watches every race I ride. And always gives me a feedback on everything I do. But down the road there is always somebody in the jocks room that tells me what I did wrong and how I could do better. The best experience I had so far was at Santa Anita race track. The jockeys were really nice and gave me few tips how to improve my riding.

FOTH: Tell me a bit about your 1st race and what was it like being in the jocks room that day (or night) and then gong out into the paddock and eventually the post parade and into the starting gate?

EK: My first race back home was very long. : D it was 1800m which is like mile and 1/8? I had to loose lot of weight and ran dead last. I don’t remember much about the race but I remember being nervous before the race and excited. I was also little disappointed afterwards: D

FOTH: What was it like finally getting your 1st race over and done with so to speak? What track was this at?

EK: It was in Czech Rep. In Prague racetrack called Velka Chuchle. Well I was happy the race was over. It was the first time I broke out of the gate and as I said I was disappointed I thought I would do better but I wasn’t really ready to be there :)

FOTH: Tell me what you remember about your 1st win and what track was that and what was it like getting your picture taken in the winner’s circle for the 1st time?

EK: My first winner was in Emerald Downs on Get Going for Arturo Arboleda.  It was a longshot and I just couldn't quite believe I really crossed the wire first :-) He just ran off with me and took me all the way :) the rest of the memories is blurry but I can still remember the excitement.

FOTH: Did the jockeys get you good after the race and did you know that was coming or it took you completely by surprise?

EK: They got me with cold water and some eggs. Not too bad compare to what they do to the boys... I knew it was coming I just didn’t know when:

FOTH: What tracks have you rode at so far and what is your favorite track to ride at?

EK: Emerald Downs and Portland Meadows are very special to me as that’s where I started. I rode few races at Golden Gate Fields, Fresno, and Stockton on my way down to Santa Anita -Hollywood Park and that is by far my favorite place :-)

FOTH: If some young girl came up to you and asked how to become a jockey, what advice would you give her?

EK: I would say think twice…and if you really can’t help it than just work hard that’s all you can do :)

FOTH: Have you had any injuries so far in your career and if so what was the worst one?

EK: I have to say and knock on wood that I've been pretty lucky so far. I've never broke a single bone in my body and I hope it stays that way for a while.

FOTH: How long would you like to ride for and do you feel you have a certain riding style?

EK: I would like to ride for as long as I can and feel comfortable. . But I would also like to have a family at one point so I guess I will just see. I want to ride now and that’s what matters :). I don’t know about the style. I am still learning. I know you are always learning but its only second year riding so I hope I will still improve and change few things but the main thing for me is to get along with the horse don’t fight it.. Just figure out what he wants to do and let him run for me :)

FOTH: How do you prepare for a race that you are riding in?

EK: I read the form, watch the replays. I like to get on the horse in mornings in case I don’t know the horse. Nothing special. .

FOTH: Take me through a typical day for you.

I focus my whole daily routine about my job, my dog and yeah. For a jockey I like to eat a lot :)

Luckily my fiancée shares my passion so if we work at the same track we just do the same things but together :)

FOTH: Do you feel you have been treated pretty fairly so far as a jockey and do you think that being a female jockey that you have to work harder than your male counterparts?

EK: I like to be different and I don’t mind working harder than anybody if it’s another female jockey or male. I don’t feel any discrimination. . There are people that won't give you chance because you are girl but if you are male jockey there are still people that won't ride you for whatever reason.. So what difference it makes anyway :-)

FOTH: Is being a jockey what you thought it would be?

EK: I didn’t really have any expectations and surely didn’t think it would be easy. At least not on the physical part. On the other side the mental part of this job is much harder than I would imagine :)

FOTH: Finish this question, if I was not a jockey I would be:

EK: In a college studying some economy, wondering what am I going to do once I get out :)

FOTH: Are there any other female riders currently riding at the track or tracks that you ride at?

EK: Yes actually this year our room is full :)-working on getting the rest-cf

FOTH: Is there any track on TV that you would like to ride at and do you have goals for yourself?

EK: My big dream is to be in SoCal I already took my shot last year and I am planning on do it again, but my main goal is just to become a good rider and I will take every way and opportunity that might take me closer :)

FOTH: Eliska thumbs up for doing this interview for my website, any last words?