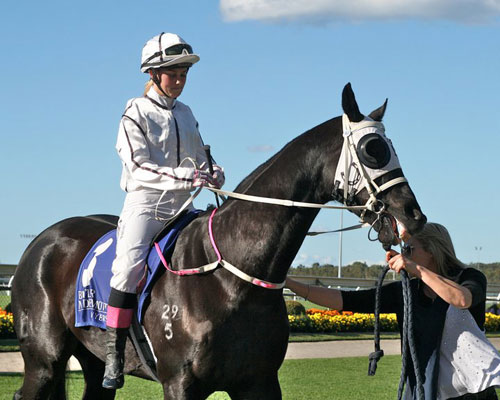 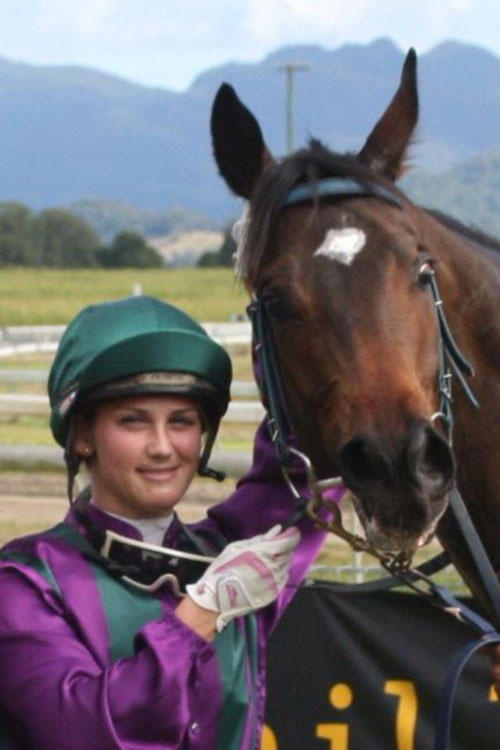 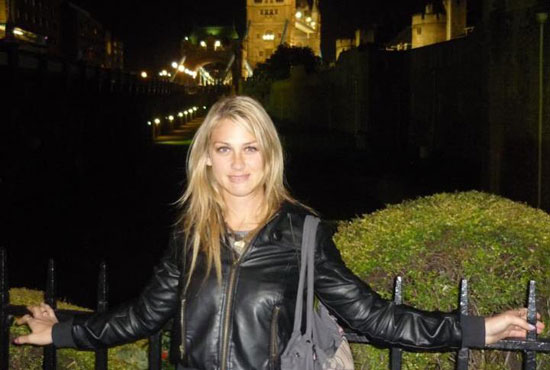 Laura Cheshire is a jockey that has been riding for almost 10 years and she has been riding in Australia and I emailed her an interview and here is what she said to my questions:

LC: Born Sydney Australia grew up back and forth between NZ and AUZ.

LC: A tomboy thru and thru.

LC: Have been a fan of horses since as early on as I can remember.

FOTH: What did you think of a live horse race the first time you saw one?

LC: umm I honestly don't remember! It was more about the horses to me than actual racing.

LC: It was basically the first job I thought of that was working with horses apart from being a vet which I didn't want to do. Basically I was small enough and determined enough to give it a try.

FOTH: Looking back was becoming a jockey easier or harder than you thought it was going to be and why?

LC: It was harder in the way of trying to get people to see you are just as well suited to the sport as any male. The actual riding part came naturally as I've always been round horses.

FOTH: Did someone teach you how to ride or did you learn a lot on your own?

LC: I was riding at the age of about 8.... Flying round the paddock on whoevers horse I was lent until I eventually got my own. She was a maltreatment case and had a fair few issues. Taught me a lot though because she was all I had to work with at the time.

LC: Yeah no worries there.

FOTH: Tell me about your 1st race. Where was it at and where did you finish?

LC: My first race was in NZ at Ellerslie Racecourse and I ran fourth on a horse called Krasnia.

FOTH: Tell me about your 1st win. What track was that at and did you win by a lot? Did the jockeys get you good after the race and did you know that was coming or they don't do anything to ya after you win your 1st race where you are based out of?

LC: My first win was at Avondale racetrack in NZ and I came down the outside ON the outsider and knocked off a fellow stable apprentice on the favourite. Needless to say he wasn't real happy. But I was!

FOTH: You told me you ride in Australia. Are there many tracks there and are there any other female riders there beside you?

LC: Yeah there are a fair few apprentice female jockeys coming thru the ranks here ATM, I am one of the few female seniors based in south east Qld tho. Yeah we have about 8 tracks which get raced on consistently.

FOTH: Is there any track you saw on TV that you would love to ride at one day?

LC: I always wanted to ride at Randwick in Sydney and I got the opportunity to when a horse I had been riding went there one Saturday. The owners flew me down. It was a great experience.

FOTH: How long is the distance in races in Australia and do you get big crowds that come out to bet the horses? Is it year round racing there?

LC: Yeah we race all year we don't have any down time. Races can vary in distance from 800m up too 3200m depending on which state of Australia your racing in.

FOTH: Describe for me what the track is like and is it all grass racing or are some on the dirt?

LC: We have predominately grass track but a few synthetic tracks which are called cushion tracks and it is still very debatable here as too weather they are much good for racing.

FOTH: What tracks have you rode at so far and how long have you been riding?

LC: I have ridden at so many tracks I couldn't list them all. I've been riding for approx. 9 years with a fair bit of injury time in between.

FOTH: Would you like to come to the US to ride some day? Is that a dream of yours?

LC: Yeah that would be an amazing experience if I got the opportunity I would grab it.

FOTH: Do you have jockey agents there like most jockeys do here in the US?

LC: Yeah we do, I haven’t had an agent before but am getting one sorted currently as a matter of fact.

FOTH: Do you have to get up on horses in the mornings like the jocks do here in the US?

LC: Yeah 4am start at the track ride about ten horses and leave at 8 when the track shuts.

FOTH: About how many jockeys are there at the track you are currently riding at?

LC: The jockey numbers here change so often and jockeys that are based at different tracks ride at the gold coast (my home track) consistently of a Saturday. There are about 20 jocks based here but some of them ride the metro circuit in Brisbane of a Saturday. So on your average raceday maybe 30 odd jocks in the room here.

FOTH: Can you make a good living being a jockey in Australia?

FOTH: What are some things you like to do when you are not doing horse related things?

LC: We have one of the best beaches in the world so I spend a lot of my free time there; I also volunteer at riding for the disabled a few days a week and spend a lot of time with my own animals at home.

FOTH: What are the riding weights over there?

LC: Our minimum now is 54kgs

FOTH: If someone was to visit Australia what places would you tell him/her to go to?

LC: The gold coast for sure. Best place in the world.

FOTH: Is riding horses over there pretty much the same as in the US and if not what do you see the biggest difference being?

LC: Our racing style is a fair bit different I think and also basically every supplement u can give a horse is banned here example: Lasix. We aren’t allowed to race on anything like that here.

FOTH: Laura I am out of questions. Thumbs up for the interview and any last words the floor is yours?

LC: Thanks for having me! Any trainers wanna give me a crack at the American racing scene be sure to get in touch! Have saddle will travel.