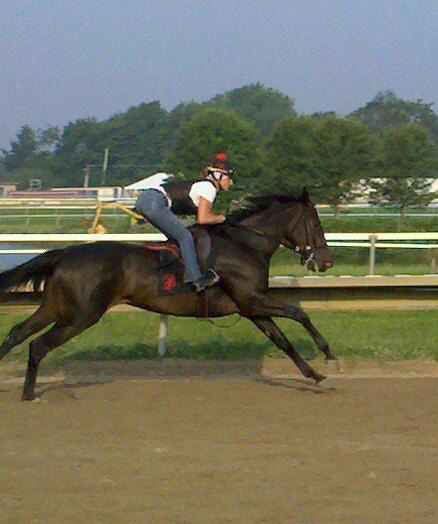 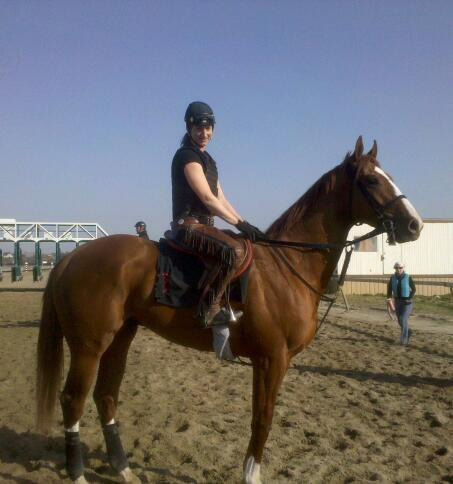 Lauren Vannozzi is currently an assistant trainer for Ronny Werner at Parx Racing and she rode as a jockey a few years back and recently I got her on the phone for an interview about both things and here is what she said:

LV: I was born in Trenton, NJ and that is where I grew up until I was like 15 years old.

FOTH: When you were growing up was that something that you thought about as a young girl who did that come later in life?

LV: I started working with show horses when I was 10 years old and as I got older I was introduced to the racing end of things and that when I found out I could actually make a living at something I loved.

FOTH: I assume the first racetrack you went to was Monmouth Park?

LV: Yes that is correct.

FOTH: What was it like going to and seeing a live horse race for the first time?

LV: It was unreal. I had never seen anything like it and it was exciting.

FOTH: Now when you were involved in show horses, did you ever have any fear of injury at all?

FOTH: So what you got a job up at Monmouth and led to you becoming a jockey?

LV: I got a job there walking hots (hot walker) when I was 14 and 15 and since I already knew how to ride I tried to get involved with somebody that would teach me to gallop racehorses so I went to a farm when I was 16 and that is when I learned how to gallop.

LV: It felt good and natural getting up on a horse. I started with riding lessons and then went to show horses and then went to learning how to ride racehorses. I went to work for Stacey McMullin who showed me how to break babies and gallop out at the farm.

FOTH: How did you feel finally getting your jockey license and how difficult was it to get it?

LV: From the time I started to gallop till the time I got my actual license it was a big deal cause I never thought was possible and a lot of people never thought I could do so it was a great feeling to be able to do it.

FOTH: Tell me about your first win and what do you remember about and what track was it at?

LV: I remember the horse as I had ridden it before for John McCaslin and finished 2nd on him and I moved her too early and she got beat at the wire. I remember I went to the front with her and luckily nobody caught her that day. The horses name was ‘Swift Sword” and it was at Phila Park (now Parx Racing) and it was a great feeling and I was so excited that I didn’t pull my goggles back up on my helmet for the [picture. I got to the jock’s room I dragged in there by my ponytail and I got water, shaving cream, everything on me. It was pretty cool and I have it on tape too.

FOTH: So how long did you end up riding for?

LV: I ended up riding for almost 2 ½ years on and off. By that time I had 3 injuries that put me out a couple months each time.

LV: I ended up riding a couple more when I knew I was going to be riding anymore, I kinda had some other ideas, so I didn’t actually know it was gonna be the last one, but towards the end any one of them could have been the last one and at that point it really didn’t matter anymore.

FOTH: What are some of your memories of being a jockey?

LV: What I really miss is the adrenaline rush of riding a horse and the excitement of leaving the gate and the feeling of a horse running good for you and especially one that is gonna be a winner or has a good chance to win. I had a lot of run riding and being around the other jocks in the room. I miss getting my picture taken, but I don’t regret not riding anymore, I got out of it what I wanted to and I got to do it so I was pretty satisfied.

FOTH: What did you end up doing when you retired from race riding?

LV: I started galloping again for some other people I worked for Cal Lynch again, who I worked before I actually started riding, and then I started working as an assistant for Trainer Mike Pino about a year later and from there I have had various other assistant jobs for various people.

FOTH: What made you decide to become an assistant trainer?

LV: I knew I always wanted to work around horses, even after my race riding career would be over. I knew I could do a pretty good job as I love working with horses. I like to pay attention to detail and it is something I knew I could be good at if I worked hard enough and I got lucky and I hooked up with a good trainer that I am still learning a lot more from still, but I thought I could make a decent assistant because I just love working around the barns and being here. I still want to stay as active as I can with the horses.

FOTH: Now being an assistant trainer, that means you have to take some kind of test right?

LV: Yes I took my test down at Tampa Bay Downs. The test was actually a little bit harder than I thought, but it is basically the same type of test a trainer would take except some of the medication questions aren’t as specific, but it was actually pretty tough. I was told it was gonna consist of 3 different parts, a barn test, you also have to give the conditions for the horse and the weight and then you also had to answer specific questions about certain injuries a horse can get, equipment you would use and medications and such.

FOTH: Being an ex-jockey, can you tell when a jockey has given a horse a bad ride?

LV: Yes being an ex-jockey I think I can tell sometimes when your rider gives a horse a bad ride and I know some of the excuses I used to give sometimes when a horse just didn’t run any better for me, when it could have maybe run better for somebody else or when you see some of the decisions that they make, but it is also hard to say, somebody gives a bad ride when your not the one on them, your not the one out there making the split decisions out there. It goes so fast out there and it is hard to blame people and having been a rider, I am not the first one to go and blame a jockey, sometimes yeah, you can definitely tell when you get a bad ride.

FOTH: What is the actual job of an assistant trainer?

LV: I overlook a string of horses for a trainer that is not physically here and I have 10 horses for him and I overlook the medications, the entries, legs, injuries stuff like that and I make sure everything in the barn is in order and take care of everything on race days and dealing with the vet and the feed program.

FOTH: Do you see yourself being with horse for a long time to come?

LV: I see myself being with horses for probably the rest of my life. Sometimes I regret it and wish I had gone to school, but at the end of the day, I don’t think this is something I’d be ever able to walk away from. This will probably be a lifetime occupation for me.

FOTH: Would you ever ride in a race again if they did a race like they did down at Pimlicio in 2010 that had all retired female jockeys in the race?

LV: I would love to come back and be involved in a race such as that. I would really enjoy do something like that. I just know I would have to ride a few races before that, I don’t know how the rules work. I would definitely be interested in riding in one next year if they did one.

FOTH: I am out of questions, thumbs up for the interview. Any last words?

LV: Glad we finally got this done and if you need anything else just give me a call and thumbs up back at ya Chris.