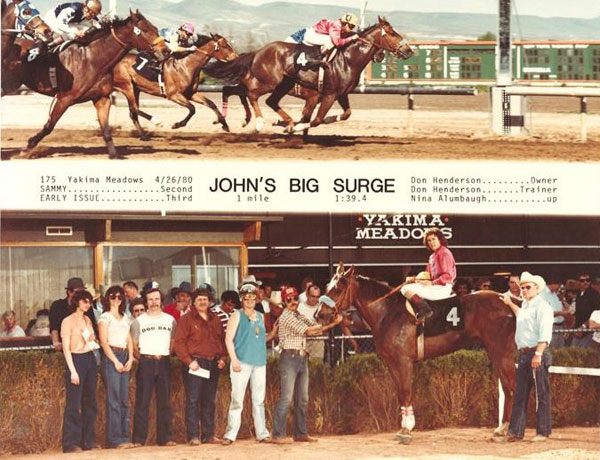 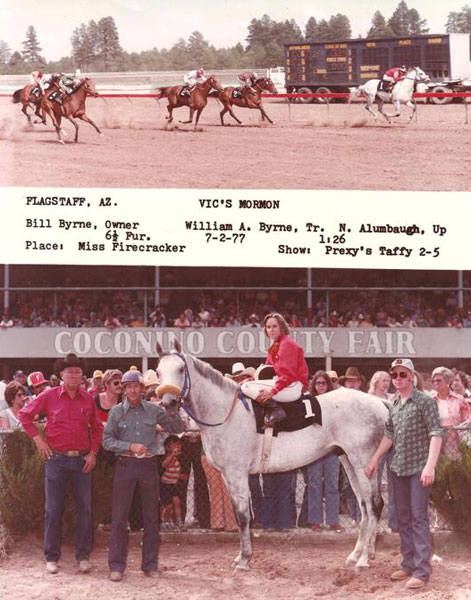 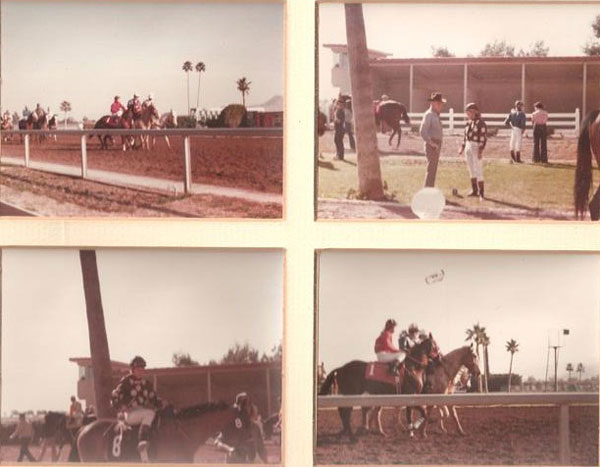 Nina Alumbaugh is a retired jockey that rode for 4 years out west in the early 80’s and I emailed her a few questions and here is what she said to them:
FOTH: Where were you born and where did you grow up?


NA: Was born in Torrence, CA. and Grew up in Southern Ca, Placentia was the town.
FOTH: At a young age where you into the horses or were you more of a tomboy?


NA: Totally both. I was always an athlete, Always loved horses. But the rest of my family loved motorcycles, so I got pretty good at riding motorcycles, raced flat track and TT when I was young, but I continued to bug my parents about horses, and finally I was able to do some training with horses at a young age.
FOTH: When you saw a live horse race for the 1st time what was going through your mind?


NA: The first horse race I saw was Secretariat win the Kentucky Derby. If you are looking for when I decided I was going to be a jockey, I was 7 years old when I knew.
FOTH: What was your first job at a racetrack?


NA: I started at Rex Ellsworth Jockey Academy when I was 17. His farm was in Pomona, CA. He raised a Kentucky Derby winner "Swaps" The Academy is no longer there. To answer the question my first job was to exercise horses.
FOTH: What was the feeling like just being around horses?


NA: Love, Trust, Like I belonged.
FOTH: When did the ideas or feeling come into play about wanting to and becoming a jockey?


NA: See question #3
FOTH: When you were learning how to ride, did you have somebody teach you and were you a fast learner?


NA: When I was around 12 I took some riding lessons. Took to it really fast.
FOTH: Tell me a little bit about the process when to get your jockey license and what was the feeling like holding it in your hand?


NA: That was a tuff experience. I hooked up with a trainer who owned a quarter horse farm in Blythe Ca, [middle of the desert] he also had a few thoroughbreds [which was my preference to ride], anyway he sent me with his son who trained the horses and I was to ride them when I got my license. This was in Prescott Az. Well I was well trained to get my license, but they did not make it easy for me at all, I finally befriended one of the stewards and talked him into coming out and watching me break out of the gates, [ the man in charge of the gates was giving me a bad time, he was also the person who says I could get my license or not.) Anyway, the steward passed me that day. So I think the most exciting moment was the next draw when I was named on a horse for my first race. I was so excited.
FOTH: How long did you ride for?


NA: I was a licensed jockey for 4 years.
FOTH: Tell me what you remember about your first race and where was it at?


NA: My first race was in Flagstaff AZ. I traveled with a trainer to ride his horse, I knew the horse could win, so I was pretty excited. The horse won the race, and that was my first mount and first win. I was very happy. Two races later, I picked up a horse to ride and he took me thru a fence, we were all ok, but what a day.
FOTH: Tell me about your 1st win and did you win by a little or a lot and what was the feeling like going back to the winner's circle to get your picture taken?


NA: Ya I put my horse in front and won by 3. All I remember about the winners circle was that I could not stop smiling.
FOTH: Did the jockeys get you good after the race and did you know it was coming and did you ever get to return the favor to another jockey down the line?


NA: Yes they did, and I was pretty embarrassed, they were all guys, and they ruined a pair of pants. I never was involved in doing it to anyone else, it never came up.
FOTH: What tracks did you ride at?


NA: Flagstaff Az, Prescott Az, Turf Paradise, AZ, Spokane Wa, [Playfair], Yakima, Wa, Couer De Lane, Id., Los Alamitos, CA [Orange Co. Fair], Fresno, CA [fair], Portland, Or.
FOTH: What sort of injuries did you get when you were riding and what was the worst one?


NA: I have had two dislocated shoulders, broken wrist, bruised ribs, and a bruised collar bone. I think the bruised ribs were the worst, anything I did hurt for about 3 weeks.
FOTH: What led to you retiring and right after you retired did you miss it much?


NA: I retired because of the politics, health issues, and wanted to have kids, I missed it a lot. I still carry that time in my heart.
FOTH: What did you end up doing with yourself after you retired?


NA: Went back to college, have two children, bought property, work outside the home and have a Christmas tree farm. Owned a Bicycle Store for 4 years and then sold it for a huge profit. I stay healthy and fit.
FOTH: When you were riding did you think you were a good jockey?


NA: I think I was. I felt as though I was getting the job done.
FOTH: Any advice to a young girl who is thinking about becoming a jockey?


NA: You need to have the passion, and will to win. It doesn’t seem like hard work if you love it. Ride because you love it and do a good job, believe in yourself.
FOTH: Will the sport ever see another Triple Crown winner?


NA: Of course, there is always another horse out there who has the will and ability to beat them all.
FOTH: Do you think the weights at all should be raised for the jockeys?


NA: No, 122, 124 is already too high, sometimes more. It is too hard on the horses.
FOTH: Did you ever have a favorite trainer that you rode for?


NA: Yes, There is always a trainer that believes in you, you can't help but like someone like that.
FOTH: What was the best piece of advice anybody ever gave you out there?


NA: Smile a lot.
FOTH: I am out of questions. Thumbs up for the interview, any last words, the floor is yours.


NA: I rode horses between 1978-1981. I was involved in race horse from 1975 - 1981. Today it still feels like it was yesterday.  I am sending you two win pictures. The Grey horse was my first win, the other picture is at a different track, and one of my favorite horses to ride. I have some newspaper articles also, I am not sure if you are interested in those. If you are I will dig them up. and send them. Also there is a set of 4 pictures those are all before races at turf paradise in Phoenix AZ.