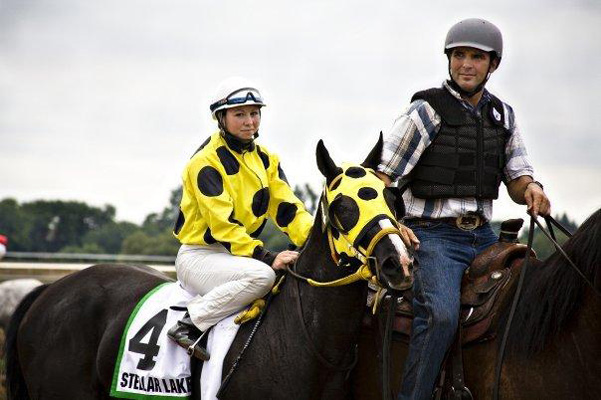 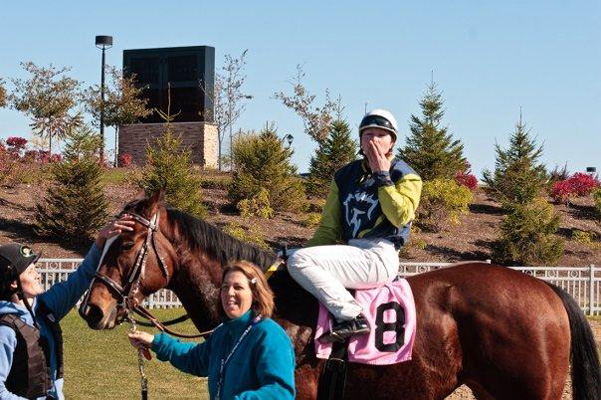 Michelle Raekelboom is a young jockey riding up in Canada right now and her goal is to eventually ride races at Woodbine. I recently got in touch with her and emailed her some questions and here is what she said to them:

MR: I was born and raised in Caledon East Ont.

FOTH: What sort of girl were you growing up? Were you a tomboy like most other female jockeys I have spoken to?

MR: Growing up I was a real Princess. I wore dresses did gymnastics and was very bossy. Things always had to be done my way.

MR: Like most girls I wanted to be a veterinarian or a marine biologist but hated school

FOTH: Did you have a love for sports and stuff as a young girl?

MR: I was a big sports fan growing up. I played soccer for 7 years, tennis, baseball, volleyball, dance, figure skating, and did competitive gymnastics from the time I was 3 till around 12.

FOTH: What did you think of horses in general the first time you saw one?

MR: My best friend Mara was into horses so the first time I went to see her ride I fell in love with them. I wanted to ride one so bad.

FOTH: What did it feel like getting up on a horse for the first time?

MR: I think I was 6. I remember not being able to get the bridle on because I was so small. I rode a horse named Brownie at Dusty Trails Ranch where my mom had agreed to sign me up for a few lessons. The first thing I asked the instructor was "when do we get to go fast"?

FOTH: How did you end up becoming a jockey and how long have you been riding for?

MR: I've been riding ever since then. I did the show horse and pony club thing as a kid then got a job at Gardiner Farms in Caledon East where I learned to gallop. I was there for about 4 yrs before I went to the track to gallop. My boyfriend at the time was race riding quarter horses so every time I went out to see him ride I got an itch. Then one day he told my I couldn't ride quarter horses. That I would get hurt. Well me with my stubborn streak decided right there and then I was gonna be a jockey.

MR: Well I gallop at Woodbine in the mornings and race ride at Ajax Downs. They are both great tracks to ride on.

MR: My goal is pretty much to win as many races as possible and improve my riding ever year.

MR: I get along with horses that like to be left alone. the ones that like the lines thrown at them and say "here run".

FOTH: Take me through what goes on in your life in a typical day?

MR: I get up feed my horses around 4:30 am then hit the road. I'm at woodbine by 6 to gallop until 10. Then make the drive from Woobine to Ajax for the races.

MR: I love to go on hikes, shop (like most females) or just stay home and play with my own horses.

FOTH; Do you like riding on the grass or dirt more or either one is fine with you?

MR: Well we only run on the dirt so guess I like the dirt

FOTH: Tell me about your 1st win.

MR: My first win lol. Like the new kid I was riding everybody's rats just to get my name out. So I get named on this huge quarter horse that wore earplugs. the trick was after the gates opened you had to reach up and pull the earplugs out. Well I did that and when I looked up I was winning. I buried my head started yelling and screaming and went to riding. My win picture is so funny. I have the biggest smile on my face crossing the wire.

MR: When I got back to the jocks room I got soaked with 2 huge buckets of probably dirty water. I sort of expected it but not that bad.

FOTH: Do you think you will be involved in horse racing for a long time to come?

MR: Horses are my life. It's pretty much all I now and I wouldn't change it for the world.

MR: I love all sports. My family is actually into car racing.

FOTH: Have you ever had any serious injuries yet?

MR: My first year race riding I got bucked off coming out of the gate and the horse stepped on my face. I had to get 17 stitches in my mouth but surprisingly there is hardly a scar. other then that nothing to bad. A broken finger, torn muscle in my ankle from being hung up in the gate, and tons and tons of bumps and bruises.

FOTH: What is it like jogging a horse back to the winner's circle?

MR: It's a rush. It's satisfying to know that all the time and hard work you have put into your career has payed off. There is no greater feeling.

FOTH: Did you have anybody teach you how to ride or did you learn a lot of it on your own?

MR: There are 3 people in my life I learned from and still look up to for what they taught me. Sherry Mclean Got me started riding racehorses as a kid and always pushed me to try my best and move on with my skills. Ian Dick taught me to never be scared, hang on, and always have fun doing it. And Finally my inspiration for becoming a jockey Ramon Dominguez. He taught me style, technique, and gave me the will to win because I didn't want to get beat by him.

FOTH: Do you have a favorite horse that you have ridden?

MR: My favorite horse is Eysa Quick. Her and me just click. I have ridden her since she was 2 (she is 5 now) and she has never not tried. We have 6 wins together, are stakes placed, and have only missed the board twice.

FOTH: What has been you proudest moment as a jockey so far?

MR: Winning my 1 and only stake lol. I picked up the horse "Into Fast" after the trials and sure enough she won. It was so exciting.

FOTH: Do you consider jockeys athletes and do you feel your underpaid?

MR: I think we are definitely athletes with how fit you have to be. Just like any other sport the better you are the more money you make. If you are winning races consistently its a great paycheck at the end of the week.

MR: Probably easier. Because I was dating one of the leading riders at Ajax I had no problem getting my foot in the door. Don't get me wrong. Once I was in I was on my own but I had a lot of people supporting me.

FOTH: What would be a favorite track that you would like to ride at one day?

MR: I might try riding thoroughbreds at Woodbine one day. Right now I'm doing to good with the quarters to leave but maybe in the future.

FOTH: I am out of questions Michelle. Any last words, thumbs up for doing this interview and being part of my website.

MR: Thanks for the interview. It's my pleasure to promote and support female jockeys GIRL POWER!!!