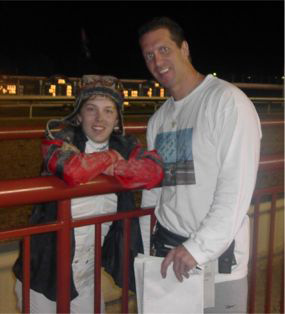 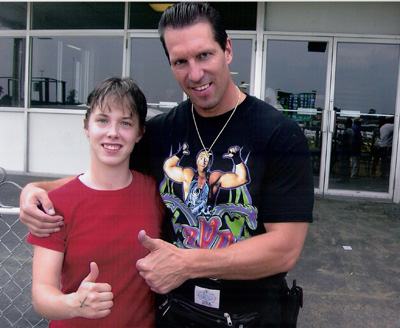 Sarah Gibson was a jockey I got to know quite well when she was riding down at Charlestown a few years back. I lost touch with her and always wondered what happened to her. Sarah recently saw my MySpace page and got in touch with me and I got her on the phone for this new interview with her.

FOTH: Sarah it is a pleasure talking to you again after some time and I am not gonna dwell on some of your racing stuff that I touched on the 1st time around (you can read that in the interview archives section) so what has happened to you since your apprenticeship ended a few years back?

SG: I went down in a spill a couple days after I lost my bug and I broke my back.

FOTH: How long did that keep you out for?

FOTH: When you got the injury was there any thoughts of coming back or were you thinking of stepping away for awhile?

SG: I definitely wanted to come back and I did come back and I was galloping in Middleburg for Simon Hoffman and trying to get fit and everything again and then I left Middleburg and I went to South Carolina and I was galloping horses there and I was trying to get my assistant's license there. But it really didn't work out and I ended up in Chicago working for Steve Asmussen and I had some trouble getting paid, but not by Steve and I just felt discouraged by the whole thing and I said you know what I should probably learn to do something else.

FOTH: Now your currently going to school from what I understand.

FOTH: What are you going to be majoring in?

SG: I haven't decided what my major is going to be, I am just taking my basic associate classes right now, sort of just can feel around and sort of see what I want to major in.

FOTH: Is there any thoughts right now of going back to riding right now or are you gonna wait and see happens after college cause I know your still a young girl?

SG: Yeah I do wanna go back at least in some capacity. If I can't ride I'd hope to train for myself someday.

FOTH: Let's go back in a time a bit. How would you rate yourself as an apprentice? Do you feel you were a good bug rider?

SG: I think I did pretty well there. I think if I played my cards a little bit differently I could have done better.

FOTH: What are some of things that stick out in your mind of your days of riding with the bug?

SG: Riding long shots was always a thrill for me. Nobody would believe min them and then they would win. It was just kinda amazing. The 4 1/2 furlong races were always fun for me too. I also loved riding at Colonial Downs when I had the opportunity to go there. I really love that track. Very hot down there, but I loved riding on that track.

FOTH: Where most of the trainers pretty good about putting a young female apprentice on their horses?

SG: A lot of the trainers did not want to put a girl on a horse. Once I got up and going and I was doing pretty well, then I would gallop horses for people and a lot of people would change their mind. Most of the time they would let you gallop them, but when it came time to ride em in a race, they would put someone else on the horse.

FOTH: Do you feel you had to really prove yourself and to work that much harder to win over some of these people?

FOTH: I probably asked you this in the original interview, but if a young girl came up to you and wanted to become a jockey, what advice would you give her?

SG: Depending on the circumstances and how tall she is I would probably tell her to wait and do to it when she is a little older because you can still have that 10 pound bug, but then you have that much more knowledge. It is kinda a hard avenue for young people because it puts you in so much contact that used to gonna be used to. I would say wait till have more knowledge and if you want to ride just continue to ride and make sure you have something else in mind and then go for it. A lot of people start in their early 20's.

FOTH: Did you teach yourself a lot as far as riding goes or did you have people help and teach you on how to become a jockey?

SG: I rode for Mike Pearson and he helped me a lot. He always believed in me and I would say "I can't ride that horse" and he would tell me "yes you can you can do anything." I had help from him and I also had help from Bobbie Armstrong at the time and he is very knowledgeable and helped me as far as critiquing and a lot of the race riding just sort of came in. I had help with breaking the gate and things like that, but it all just sort of fell into place.

FOTH: Have you been back to Charlestown since you had that spill?

SG: I went one time actually. I have been there a couple other times too.

FOTH: Do you miss being a jockey a lot or is that part of your past?

SG: Oh absolutely. I miss the job itself and if you can swing it, it is one of the greatest jobs you can get. I miss the horses and they are what makes the sport what it is.

FOTH: Do you still follow the sport even though you aren't currently riding?

SG: I do follow it, but not as much as I'd like too cause I am pretty busy, but I still have friends who are still in it obviously and I follow them and what their horses are doing and I watch the Derby, the Preakness, breeder's cup, etc.

FOTH: Do you think another female rider will win one of the triple crown races?

SG: Yeah I do. I think more and more woman are in it every year and when I was riding at Charlestown there was what 2 female riders.

SG: if you look now there is at least a few woman riders at most tracks.

SG: Oh yeah. I have thought about that for years. If I can't ride I at least would want to do something with horses. Riding was my true passion so if I can't do what I really want to do I better learn something else.

FOTH: Can you watch a horse race and see if a jockey makes a mistake or not?

FOTH: When you were riding down at Charlestown did you pretty much get along with all the other male riders or did the guys gonna resent when a female won a race?

SG: That definitely happened. Sometimes when I won a race you might see one of the guys throwing a fit. Most of them were pretty nice and pretty cool, but some weren't so nice. It is a pretty hard track. When you leave that jock's room nobody is your friend. A lot of the old school guys like Larry Reynolds were class riders, but a lot were just cut throat riders. It is a totally different avenue riding there because your like a ping pong ball, you have to be on the ball all the time and you have to know where everyone is. Riding a bigger track is easier cause you have more room and you don't get in as many tight spots.

FOTH: What tracks did you ride at?

FOTH: Do you have a favorite of the 4?

FOTH: Are the turns at Charlestown as tight as they seem on TV?

SG: Yeah they really are. You ride a lot of bad horses there, they come from other tracks that can't make it there anymore so they are more likely to blow the turn.

FOTH: Are you still in pretty good shape. I mean if you had say 30 days, could you be ready to ride again?

SG: I am actually weight less than when I was riding cause I loss that muscle mass when I was injured. I am still in pretty good shape, I bike every day and I my upper body would need some work, but if I was given a month, yeah I think I could do it.

FOTH: Did you have any other injuries besides the back one you spoke already about?

SG: Oh yeah. I dislocated my shoulder, my elbow, I have had a bunch of concussions and broke my feet and my fingers. I also broke my collarbone once.

FOTH: Were your parents supportive when you riding?

SG: My dad was totally supportive, but he didn't take the injuries too well. He understood it and that injuries were part of it. He was really good about it, but he kinda freaked when I got hurt. My farther came and watched every single race I rode.

FOTH: What is always a thrill for you jogging a horse back to the winner's circle?

SG: Oh yeah. It was always amazing. You just feel so good cause that is what your there to do.

FOTH: Sarah I am out of questions and thanks a lot for letting me do another interview. Let's stay in touch and anything you want to say or add to this interview feel free.

SG: No just appreciate you thinking of me and thank you very much for the interview.