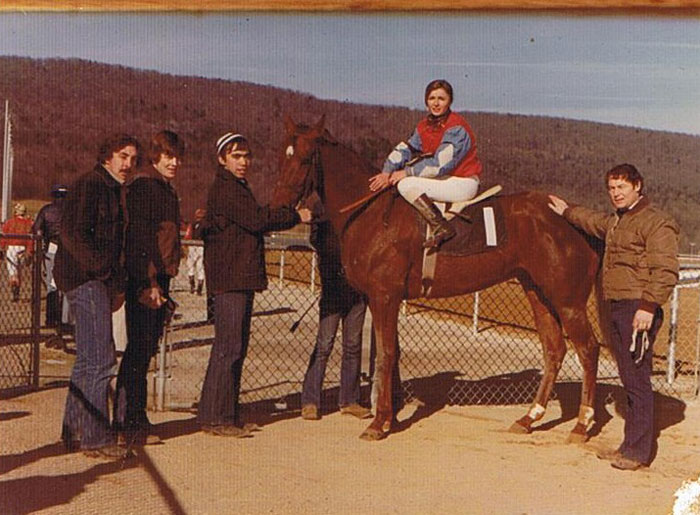 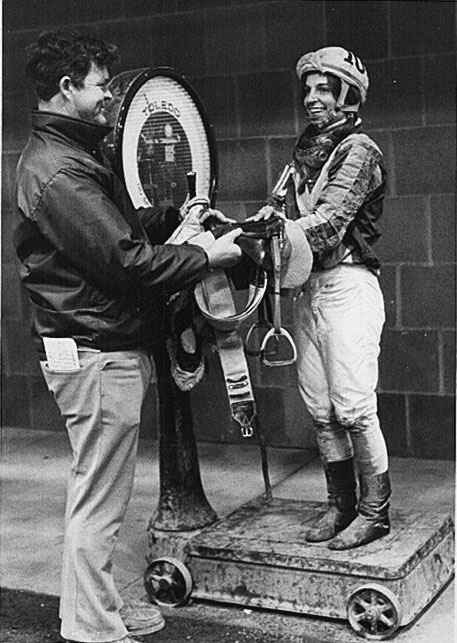 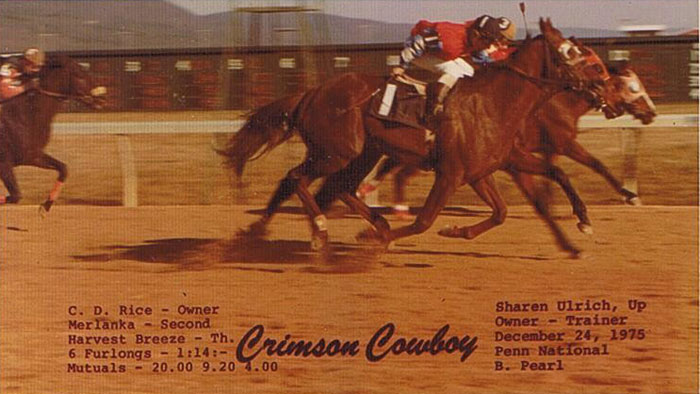 Sharen Ulrich-Patterson is a retired jockey that rode in the 70’s up at Penn National and here is her story:


SUP: I was born in Reading, Pa. grew up on family farm outside of Womelsdorf, Pa.


SUP: Very shy, spent most of my time with my pony and then my horse.


SUP: My parents both rode and had me on a horse before I was a year old, always had a pony or a horse, never remember a time when I did not love horses. I really did not know exactly what I wanted to be when I grew up, but knew it had to involve horses.


SUP: I had been working at an office job in a department store for 5 years and had moved up as far as I was going to and got bored. A friend was a feed man at Penn National and said he could get me a job hot walking and I would make more money and shorter hours than my office job and I jumped at it. I hot walked for a few months and the trainer found out I could ride, so he put me on the stable pony and then on to galloping horses. After galloping for about a year and because of my size a couple of trainers told me I should start riding, so I did.


SUP: My parents taught me to ride and it was natural for me to ride.


SUP: I think it was easier than I thought it would be, I won with the third horse I rode and then never looked back, I was really hooked.


SUP: I rode my first race at Penn National in 1973, Park Lamparter put me on an old, 12 years old gelding, named Belford Gus and of course it was the last race on the card, so I had all night to worry about it, but once the race started it was fine, I ended up 7th or 8th.


SUP: My first win was at Penn National in 1973 on a filly named Karen K, she paid around $50 to win. The guys threw water on me and I got the boot polish treatment also, I knew it was coming, but I was so happy I just did not care.


FOTH: What tracks did you ride at when you rode and was it tough being a female jockey back in those days?


SUP: My home track was Penn National but I shipped in and rode at Keystone(Philly park) ,Pimlico, Bowie(it Was a track than, not a training center), Laurel, Liberty Bell, Pocono Downs, Atlantic city, Monmouth, Garden state and Delaware Park. By today’s standards it was tough being a girl rider, but I had nothing to compare it too, so you just kinda cowboy up and did it. Most tracks did not really have a girl’s jock room, so you ended up it some funny places. At Garden State they put me in a women’s lounge, so as I am getting ready to ride there are women coming in and out, they were always surprised to see me.


SUP: Injuries lead me to retire and I do not remember if I knew it was my last race when I rode it, but I did know things where winding down. I did miss riding a lot when I first retired and for a long time afterwards, but I think it was the right choice at the time. I took out a trainer’s license and stayed on the track up to about 6 years ago.


SUP: I was on a first time starter at Garden State and a bug boy put me in tight, my horse hit the rail hard and I came off and hit the rail and ended up on the turf course I broke my back in 4 places and my tail bone off. I had a horse break his leg with me at Penn and fall and roll over me; he stepped on my arm and shattered it. I ended up in the hospital in traction for 6 weeks after that one. I had a horse flip in the gate with me and I had stress fracture of my right leg.


SUP: Best things-you are making a living doing the thing you love most, you work outside, not inside, and the race track is like a huge extended family, made some great friends and the huge rush you get when you win a race. Worst things for me were the injuries.


FOTH: What was the craziest thing you saw happen in a race?


SUP: One time at Penn we were at the head of the lane and Dale Gress yelled at me to look out for the dogs, I was thinking the cones, but 3 dogs came out of the infield and were chasing our horses down the lane. Also the night the lights went out at Penn during a race, when they came back on there were horses and riders everywhere.


FOTH: What are you doing with yourself these days? Do you still miss riding at all in any small way?


SUP: My husband and I have a small farm we have one horse in training, a couple of riding horses and one client we have horses for, also we have a shop where we repair tack and we buy and sell tack. Yes I still miss riding, even though we do trail ride it is not the same.


FOTH: I see your now on Facebook. Have you reconnected with any other horse racing friends from back in the day yet?


SUP: Yes I have and it has been great and got see to Mary Surrency, who I had not seen in a long time, at the shoot at the Dish in Ocala.


SUP: That she would have to work real hard, riding is not a job it is a way of life and a lot of times you do not have time for much else in your life.


SUP: I never got to ride on a turf course and always wished I could have.


SUP: I would never say never and hope to see one in my lifetime.


FOTH: When you look back over at your career what are some of the good and bad times that you remember?


SUP: I remember driving back to Penn from Keystone, had just won a race at Keystone and was headed back to Penn for some live mounts that night and thought it does not get any better than this. Also I won an all-girls race at Penn one year and that was a blast. Also one night won 3 races at Penn with 3 mounts and was the first girl to do that. I think. The bad times besides the injuries, winter night racing, bad tracks, bad weather, and sore horses.


SUP: Yes, I loved riding distance horses that came from behind; I could have a lot of patience waiting to make that one run.


SUP: I think slot machines at race tracks will end up being the death of horse racing, if you go to a track like Penn now, the crowd is at the slot machines, no one is at the races. I think in the not so distant future, there will be a hand full of tracks, NY, CA, KY, and maybe Fl. The small tracks will do away with the horses and keep the slots.


FOTH: I am out of questions. Thanks for taking this ride down memory lane with me any last words?


SUP: I would do it all again in a New York minute.