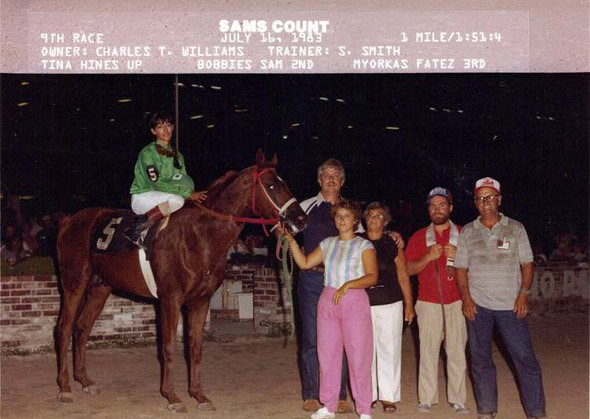 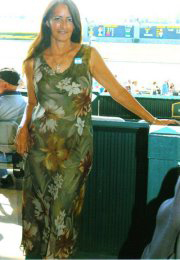 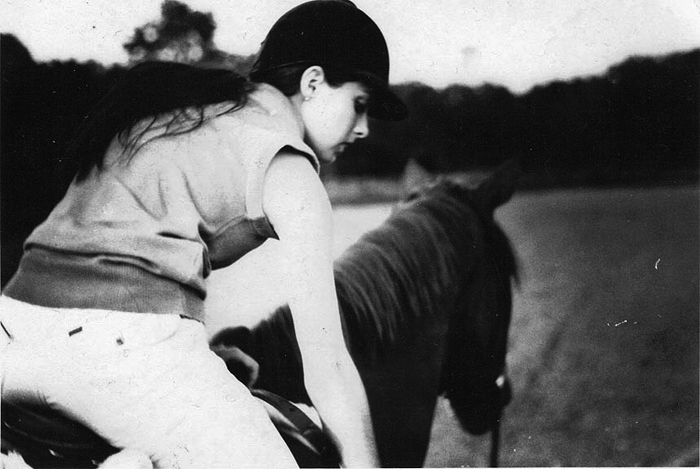 Tina Hines is an ex-jockey who rode about 60 races at a mixed meet and 40 thoroughbred races in the mid 80’s before she retired. She is now in Lexington, KY doing racing publicity and TV work and here is her story:


FOTH: Where were you born and where did you grow up? Did you come from a big or small family?


TH: I was born at an air force base in Orlando, Florida, grew up in Omaha, Nebraska. Youngest of 3 kids, parents divorced when I was 10.


FOTH: What sort of girl were you at a young age and what were some of the things you did for fun back then?


TH: I was very imaginative and a tomboy who was crazy about boys and crazy about horses. I loved playing in the corn field, horses and cowboys.


FOTH: Were you into or did you play any sports as a young girl and at what time did you discover the world of horse racing?


TH: Always horse-crazy and rode at a little rental place, but we couldn't afford a horse. When asked what I wanted to be when I grew up, by my 3rd grade teacher, I asked her what do you call someone who gets paid to ride horses? She said jockey. That's when I knew what I would do. My father said "I'm sorry, they won't let girls become jockeys", I responded "That's okay, I'll cut my hair short and they'll think I'm a boy." It was a simple as that back in the early 60s.


FOTH: When was the 1st time you saw a live horse race on TV and what did you think of that?


TH: I remember Shoemaker's name, so probably watched him ride and/or win the Kentucky Derby. I wanted to be no less a rider than Shoe.


FOTH: When you were say a teenager around the age of 13-14, did becoming a jockey ever enter into your mind?


TH: It was in the back of my mind until 1969 when I heard the news that women could ride--then it was in the front of my ambitions again.


FOTH: Do you remember the 1st track you went to? What track was it and what was the feeling of watching a live horse race?


TH: Ak-sar-ben in Omaha, NE. It was great, the racing was top for the Midwest and I was fascinated. This only encouraged me in my desire to race rice.


FOTH: Take me through the steps of you becoming a jockey? Did you get a job at a track and if you did what track was it fun for you?


TH: Oh, I did things the hard and slow way. Worked jobs walking hots, grooming during summers, then, my mother made me go to college, so I broke babies between classes. She died when I was 20, so I worked at Omaha that summer and then moved to Arlington where I worked at Windward Farms. They told me I didn't have enough experience in galloping horses and a kind man there called Tartan Farms in Ocala where I was hired over the phone. That was the real beginning. I worked for a number of farms that winter in Ocala and a veterinarian told me about a job with the Phipps Stable that would take me to Belmont Park.


I galloped horses for 5 years at Belmont. My left foot was crushed in 1980 and I was sidelined from my plans to move to Miami where women had made great strides in becoming jockeys. I finally got there in 1983 and rode Arabian races at Pompano Park, then finally my first thoroughbred race at Hialeah in 1984.


FOTH: Did you have anybody teach you how to ride and how easy did you adopt to learning how to ride?


TH: I learned from the best riders in Ocala and NY. I also learned what NOT to do from poor riders. I had great trust in the good riders and followed their suggestions to the letter. Influential race riders were Angel Cordero, Jr. and Braulio Baeza in NY. In Florida they were Alexis Solis and Jose Santos.


TH: Much harder, I thought you just had to be small, I didn't realize the skills set I would need to learn and how long this journey would take me.


FOTH: Now you rode in the 80's when it was a tougher time for female jockeys than it is now. Did you feel you had to prove yourself to trainers when it came to riding in races?


TH: No, Mary Russ had opened the flood-gates for women riders in South Florida. On one day at Calder, there were over 10 female jockeys riding the same day. The locker room was usually pretty busy.


FOTH: Tell me about this "mixed meet" you rode at in the 80s'? Were all the races at one track or at a couple? Is riding at them the same as riding a regular race?


TH: My first mount was on an Appoloosa, I whipped stride for stride, while the other riders--Quarter horse jocks, whipped constantly. I finished 3rd in that first attempt, then had the leading rider teach me their style of riding and whipping. I was there mainly to ride the Arabians, which were similar to Thoroughbreds as they ran route races. The main thing was that there was no apprentice allowance and the trainers treated us all as journeymen, and that led to more respect as professional riders.


FOTH: You also told me you had 4 wins riding at the "mixed meet" so how was that was the feeling like finally winning a race and did the jocks get you after the race?


TH: The gate crew grabbed the fire hose and nearly knocked me off my feet, lol. The jocks hit me with various kinds of food. It was too fun. I was told this mare would not be beat, so there was a bit of pressure not to mess that up. She set a new track record in that win.


FOTH: You also told me you rode in about 40 thoroughbred races. What track or tracks were those at and what was it like riding them and were you the only female jockey riding at that track at the time?


TH: There were about a half-dozen or fewer women riders when I rode my first race at Hialeah. I was supposed to ride my first two TB races without a whip, but when I used my hand to whip my horse into a rousing run to the leaders, finishing 4th by 1 1/2 lengths, the stewards then let me ride that second race with a whip. I later rode at Calder and Gulfstream Park, opting out of invitations to Delaware and Canada with the Arabians and sticking to thoroughbreds.


FOTH: Did anybody give you a hard time when you were a jockey, whether it was another jockey, a trainer, or even fans in the stands?


TH: Just the opposite, the fans were super, the other jocks were supportive and the trainers didn't care, as long as you could ride. It did help that I had that Quarter Horse gate experience; trainers seemed impressed by that a little.


FOTH: Now what was the feeling like winning your 1st thoroughbred race? Where was it at and do you still remember the horses name and what he went off at? Did you win by a lot or was it close?


TH: Easy win on a mare named Sunday Song at 6-1. She had broken the maiden of a number of apprentice jockeys. That same day, a few races later, Brenda Zoppo also broke her maiden, her horse was Burn's Desire, 8-1. There was an article about two female jockeys winning their first race in the "Miami News" on June 25, 1984.


FOTH: Now what led to you retiring after only riding a little more than 100 races total? Did you ever have any injuries when you were riding?


TH: I never had an agent or stable behind me, and realized I wouldn't be the next Shoemaker. I did not want to end up living on the track in a tack room as I grew older. It was time to move on.


FOTH: Did you ever have any problems with your weight when you were riding?


FOTH: So after you retired did you stay at the racetrack or you moved on from racing?


TH: I keep trying to leave racing, but it's in my blood. I went back to college and got a degree in journalism and worked in racing publicity in Seattle and N. Kentucky. Then went back and got my master's degree and worked in both racing television and PBS television production. Photography had been my passion from my journalism teachings and I have returned to that time and time again.


FOTH: I know you told me know you live in Lexington, KY and are involved in racing publicity and TV now. How did that come about and how long have you been doing that for?


TH: I started my own freelance business in 1995, Fast Horses Productions and still do some photography, though I've been teaching at all levels from preschool through college.


FOTH: You also said you are heavily into doing photography now. What sort of stuff do you shoot and if people wanted to find some of your work where could they go?


TH: People can just Google my name and find most of my photos at Horseracing About.com. I've also worked for Lexington's "The Lane Report" and been published in "The Blood-Horse", "Thoroughbred Times" and mainly, in my earlier years, the now defunct "Backstretch". I also post photos from time to time on facebook--still learning how to do that and have repeated some photos to unlucky facebook friends, lol.


FOTH: You also mentioned something about a book. How far along are you with that?


TH: I'm working on a story of my short riding career and the women and men I rode with. In conjunction with that, I'm working on the screenplay for the same.


FOTH: If any young girl wanted to become a jockey, what advice would you give her and what was the hardest part about actually becoming one?


TH: Go to a jockey school. The school here in Lexington is turning out some very good riders, but I would go to Puerto Rico or Panama if I had the money and the language skills--they have long histories of churning out top trained riders.


The hardest part is getting that shot. An agent, a stable (and more stables) to ride for. But you first must learn well, so learn from the best. The schools are the best starting point IMHO.>


FOTH: Do you think we will ever see a Triple Crown horse and have you ever been to the Kentucky Derby in person and if so what it is like?


TH: Oh yes, this may be the year, we've had so many close ones with Silver Charm, Real Quiet and Charismatic, just to name a few. Having had the good fortune of working over a dozen Derby’s and hoping to work more. I was very lucky to arrive at Belmont in 1978 and saw, and bet on, Affirmed. We will see another TC winner.


FOTH: I am out of questions. Thumbs for the interview and any last words, the floor is yours.


TH: Women can ride as well as men and the men know it and accept it now. It's a great time to ride for women, so go for it, but remember, a life as an athlete is limited, so have a back-up plan for moving on when business dries up. To retire is the hardest decision you can make, but you can still stay in racing if you wish, or move on to something else. Enjoy your time in the saddle and in the industry--best of luck!