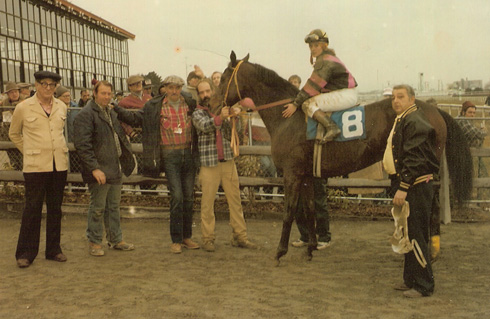 Tammy Johnson is a retired jockey that rode in the 80's that got in touch with me and I called her up on the phone and here is what she said to the questions that I posed to her:
FOTH: Where were you born and where did you grow up?
TJ: I was born in Highland Park, MI.

FOTH: What were you like growing up? Were you a tomboy like most of the other female jockeys I have spoken to?

TJ: Oh yeah. Before I raced horses I raced motorcycles in Tenn. I did motorcross and I was sponsored by a local shop and I was breaking a motorcycle in half every 3 months. (we both laugh)

FOTH: Did you get hurt much doing that?

TJ: Not that bad. I got run over, I'd fall off and I got right back on it.

FOTH: Did you have a love for horses at a young age or did that come later on in your teenage yrs.?

TJ: Yeah that was later. My mother and my step father divorced and she moved back up north to Michigan where her mother was at and she took me to a racetrack here in Michigan called Hazel Park and I saw this girl ride and I said I am gonna do that in 5 yrs. My mom said "Tammy you don't know your head from an ass of a horse". (major laughter from both of us) I actually walked to the racetrack the next morning and I was like 13 yrs old and I went to the guard shack and I told them that I wanted a job and he announced it over the loud speaker that a hot walker was looking for work and this guy came up and took me back to the barn and said if you can walk this horse around the shedrow you got a job. I had never ever walked a horse and he gave me the meanest horse to walk and I came around and this horse is on its back legs trying to paw me and stuff. I don't know how the hell I did it, but I walked the horse all the way around the shedrow and I got a job and started out walking hots.

FOTH: After your hot walking job did you move on up and become a groom?

TJ: Yeah I did the grooming and I actually had a few friends that were girl jockeys and they told me I needed to go to Ocala, FL to go break horses. I left Michigan when I was 15 or 16 and went to Ocala, FL with a hundred bucks and got a job down there breaking babies at a farm in Ocala. I did that for a couple years.

FOTH: Now for those who don't know explain exactly what a hotwalker does.

TJ: I don't know if they do it now so much, but back in the day they would use a hot walker to walk a horse around the shed row for a half hour to an hour depending on how long the trainer would want a horse walked. After a race when your horse needed to be cooled down they would prefer they would that the horse gets walked by hand and not by a walking machine. A lot of times a horse could get hurt by a walking machine and if they ran 1st, 2nd or 3rd they would have to go to the spit barn (detention barn) and walk the horse, let it cool down and drink some water and then take it in with a representative of the State Racing Commission so they can get a sample of the horse's urine so to make sure the horse is not on any illegal drugs.

FOTH: Now when you went down to Ocala to break babies did it feel natural getting up on horses and did anybody teach you the basics or did you learn a lot of it on your own?

TJ: I got taught a lot. When I was a groom I would get put in a wheel barrel and run up and down the shed row telling me to pretend I was up on a horse or they would stick a bale of hay in front of me and have me sit on it and switch a stick I had from hand to hand. With the babies they haven't even seen a human before so you are sort of learning with them. That is kinda scary and there is a lot of kids down there learning how to become jockeys.

FOTH: Now when you went down to Ocala, FL was the plan at the point to learn how to ride with the goal of becoming a jockey?

FOTH: Now looking back do you think going down to Ocala was a good idea and helped you out in the long run?

TJ: Yeah it taught me a lot about the horses and where to put your hands on a horse and what do to when a horse bucks.

FOTH: Now did anybody when you were down there try and talk you out of becoming a jockey?

TJ: Oh no they told me I was too crazy cause I was a girl and I was too little. That I would never make it. (laughs) They tried to break my spirit, but they didn't realize how tough I was.

FOTH: How long were you down in Ocala for?

FOTH: Now how long did you ride for?

TJ: I started in 1983 and rode in Pennsylvania at Keystone (now Phila Park) and got approval from the stewards and then I had to get approved from the starter and I got my apprentice certificate.

FOTH: What led to you going up to Bensalem, PA to ride of all places?

TJ: I had a couple older riders that told me to go there. They said I was done with breaking the babies that I had to go to a track now and that is where they were going so I went with them. I rode my 1st race also in 1983.

FOTH: Now looking back now was becoming a jockey easier or harder than you thought it was going to be?

TJ: It was very hard.

FOTH: Were you nervous at all in front of the stewards and what was the feeling lime when you first got your jockey's license?

TJ: I was scared to death. (we both laugh) The stewards and starter would watch you ride and if you did anything wrong you would have to re do it. I got 4th in my 1st race and back then you couldn't ride your 1st 2 races with a whip.

FOTH: Your 1st race. Were you nervous at all?

TJ: My 1st race I couldn't sleep the entire night before. I was so scared and my mom had flown in from Michigan and she was like take a valuim.

FOTH: How long did you stay at Phila Park for?

TJ: I think for that season.

FOTH: Did you ride at Penn National or Pocono Downs?

FOTH: Tell me about your 1st win, what you can remember about it.

TJ: I won by like 2 lengths and it was amazing. When I got back to the room all the jocks got my with shaving cream.

FOTH: I was gonna ask you that. Did you know that was coming or not or did you get so caught up in the moment that you forgot?

TJ: Yeah I was so excited I forgot about the initiation.

TJ: I rode from 1983 till 1989 and I kept galloping and breaking babies for quite awhile after that. I rode at the Fairgrounds, Delta Downs, Evangeline Downs, Jefferson Downs, Mountaineer Park, Charlestown. At the Fairgrounds me and my agent at the time became the 1st female jockey and agent combination.

FOTH: Oh very cool. Now at all these tracks you rode at, did you think you were treated pretty fairly?

TJ: No not at all. Even the guy riders were very mean. They would beat you with the whip and you had to be tough and not back down.

FOTH: Now is there any couple special days that stick out in your mind at all?

TJ: Up at Suffolk Downs this one old poor man couldn't afford to feed his own horse and I told him to just let me ride his horse and I'll feed em and if you enter him he will win and he did and I won for him so that was really nice.

TJ: No I didn't. I actually had my daughter back in 1987 and when she turned 5 that is when I retired from race riding. I went back to college and became a nurse. I did continue to break babies and gallop, but that was the main reason why I retired. I was worried about going down and getting paralyzed and what would happen to her so that kinda forced me into retirement. When you a mom you have to give up certain things.

FOTH: Did you have any serious injuries while you were riding or did you just have a few minor bumps and bruises?

TJ: No nothing really major. I had some broken ribs, broke my ankle 3 times, my leg once, my nose 5 times and I had a fractured pelvis. The 1st time I ever fell off a horse I broke my ankle and I ended up riding for a week with a broken ankle.

FOTH: If your daughter wanted to become a jockey would you let her or you would not let her?
TJ: Oh my daughter is to big to be a jockey, but I would let her cause her father was a jockey. I have no idea where he is at now, but she is 21 yrs old now.

FOTH: What advice would you give a to a young girl if she wanted to become a jockey?

TJ: Just to never give up and make sure that trainers ride you for your ability and for nothing else cause there will be people out there that will try and talk you into things you shouldn't do.

FOTH: Would you like to see the weights be raised at all and did you have any problems at all with your weight when you were riding?

TJ: No but I was always told I was too little cause I was 4" 6 and I weighed 95 pounds. Me and Billy Shoemaker wore the same size boots and I had to get mine custom made cause I wear 3 1/2 in little girls shoes. I don't know how hard it is for girl riders, but back then it was very hard cause there was so few of us.

FOTH: I know you said you had some problems with some of the male riders up in the room. Did any of this lead to punches being throw or was it all just verbal?

TJ: Oh we got in fist fights in the jock's room. It got ugly in a few places and I had to hold my own. After you do that a few times and whip their butts they respect you. (laughs)

FOTH: I am out of questions. Anything you want to say or add to this interview please go right ahead.