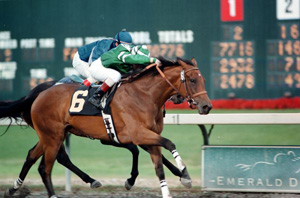 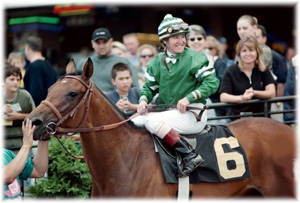 Vicky Baze is a retired rider that I got in touch with about doing an interview and she agreed so I got her on the phone for this chat and this is what she said:

VB: I was born in Georgia and I was in a military family and I was really never from anywhere till I moved to Seattle in 1985 where I established my residency there.

FOTH: Now when you were moving around a lot was there any places that you didn't like or was there always something about a place that you liked?

VB: Some of my growing up years were overseas in the Mediterannian. I spent from third grade in Greece, fourth and fifth in Scotland with my mother's family and sixth through 11th in Naples, Italy and Sardegnia, Italy, which is an island just off the coast of the French island of Corsica. Very beautiful country and the living amongst the Italians was a wonderful experience.

FOTH: Was there any horses or racetracks over in Greece?

VB: None that I know of in Greece, but in Italy there are.

FOTH: When did you start with the horses?

VB: I got a job in England when I was 16 in 1981 and worked there for nine months. I got my 1st break when I worked for a racing yard in Wokingham. Trainer Cliff Austin who was generous enough to give a 16 year old girl without an riding experience at all a chance to work for him. He and his family took good care of me and after a month it being evident I was too inexperienced, he helped me get a job with with riding instructor's who owned her own riding and livery stable. She was a British Horse Society Instructor and it was she who gave me a much-needed groundwork in horsemanship. I stayed there for about a year and once my dad retired from the navy and he transferred from Italy we all settled in Southern California and I eventually found work breaking babies at a training center in Riverside and just progressed from there.

VB: The racing in England is completely and totally different from the fast paced level that American horse racing is. They don't train on a racetrack, they train at their own private farms and they ship to the different racetracks.

FOTH: When you went out to Santa Anita to be an exercise-rider was it at that point that you knew you wanted to become a jockey in the future.

VB: I had always wanted to become a jockey since 1976. When I read an article about Steve Cauthen in the Reader's digest after he won the Triple Crown, it solidified in my mind and inspired me along my own way.

FOTH: Tell me a little bit about your experience out at Santa Anita. Did you have any people teaching you how to ride and stuff?

VB: No nobody teaching me. I learned on my own by watching other riders. No one particular person took me seriously enough to mentor me. Most people told me I was too small and my 90 pound frame wouldn't take riding races.

FOTH: How long did you exercise horses at Santa Anita?

VB: I started at a farm in the summer of 1982 and I was galloping horses at the Southern Cal circuit by February of 1983. I started racing up in Seattle in 1985.

FOTH: Tell me what you remember about your 1st win.

FOTH: Was that at Longacres?

VB: Yes it was my 9th race ever. The trainer was Junior Coffy He is actually a famous football player and he turned trainer and he played the Green Bay Packers and he won a Super Bowl.

FOTH: What are some of the other tracks you rode at besides Longacres?

VB: The racing season ends in September and a lot of the trainers go to the Bay Area so I went there and rode for some of the trainers I was riding for in Seattle and in the spring I would head back to Seattle.

FOTH: What was your favorite track to ride at?

VB: Oh Longacres for sure.

FOTH: Do you feel when you were riding that you were treated pretty fairly as a jockey?

FOTH: You didn't have many trainers and owners now wanting to ride you because you were a female?

VB: Oh yeah I have had a few owners occasionally that didn't want to ride me because I was a woman.

VB: I would tell her to get experience and to work your way up by say working on a farm and learning how to break colts and go from there. You have to start low on the rung to get a feel to see if this is what you really want to and
if you have the heart for it. And you have to have proper horsemanship. You need to handle a horse before you get on a racetrack.

FOTH: Do you think there ever will come a day when a woman jockey is treated the same as a male jockey?

VB: Look at Hilary Clinton and Condi Rice. We have a lot of woman that are up there in government. I would say the whole mindset for women in business is great. I don't think people are thinking of it as a separation anymore like your asking.

FOTH: What were some of the injuries you have over the years and did you have any really bad ones?

VB: I really had no bad injuries. I had my neck fused in 1997 and that was the hardest injury. Other than that I had nothing else really.

FOTH: When you went to retire did you know at a certain time that this was going to be your last race or did you at some point just say "I have had enough" and you just retired?

VB: No I never really thought that in my mind. I agree with the saying: "never say never" so I have never formally did.

FOTH: Do you have any days that you can recall that stick out in your mind whether it was winning 3 races or winning a stakes race etc?

VB: I think I won 6 races one day at Longacres. There was also a 4 win day in the San Fransisco Bay Area.

FOTH: Was there any tracks that you rode at that you didn't like too much?

VB: I liked every track that I have ever been too. There was a track in Fresno and I didn't go to ride, my husband Gary was riding for Dennis Ward, but the area was so hot and I don't deal with heat very well and I wasn't riding and I was there 2 weeks and I said "Let's go" (laughter). And besides that the worst thing was we couldn't get a decent cup of coffee anywhere. There were no Starbucks there at the time....

FOTH: Do you go and watch your husband (Gary Baze) ride a lot?

FOTH: Can you watch a race and see if a jockey makes a mistake on a horse?

VB: All riders are out there to win race because that is how they make a living. I never criticize riders because they are all taking their lives in their hands and they are human and it is a battle out there. I don't believe in it being critical it doesn't serve a positive purpose. The only time to watch and analyse a race to watch for mistakes is for apprentice jockeys who are learning and asking me for advice. There are bettors out there who will however take races out of context and see things that may or may not have happened and may criticize about how a jock rode a race because they lost their money and that is the kind of criticism that I don't pay any attention to.

FOTH: Did you ever have any problems with your weight at all when you were riding?

VB: No I was very lucky and never had any weight problems. Gary on the other hand has been a reducing rider his whole career and I have seen it from the other end and I have gained a lot of admiration for him in general. I don't know how they pull weight and ride. I know when I rode I was tired at the end of the day.

FOTH: When you are at the track do you still get people recognize you being an ex-jockey and all?

VB: We are like one big family. The horse racing world is a very small world. Everybody knows everybody.

FOTH: Looking back do you have any regrets or things you wished you might have done differently when you were a jockey, maybe like coming to the east ride?

VB: Funny you should mention that and I wouldn't say regrets, but yes I was curious at times at what it would be like to go and ride on the east coast. However I was very content living and working and riding in the Northwest, because after traveling so much growing up, I really liked having the stability and great work environment that the Seattle area gave to me. I wouldn't give up being tucked away in the Pacific Northwest my entire career for anything.

FOTH: I want to talk about your little on-line business you have of selling horseshoe gifts. I guess you could say. (you can see the link to it at the end of this interview) How did you get started in selling this?

VB: It was an idea that got locked in my head for a long time, even while I was riding but didn't have the time to pursue it until now. I make good luck gifts using genuine horseshoes. I have several different designs and my best-selling ones are the beaded turquoise in the Western Collection page of the site and also the Celtic Eternity Knot wedding horseshoe gifts in the Wedding section.

FOTH: How is it going?

VB: I have been getting orders as far away as Scotland, New Zealand, Ireland and they people they find me on various search engines --mainly Google. If you google he key-word "horseshoe wedding gift" Google will send you there. That is how people from all over the world are finding me.

FOTH: Do you plan on branching out to sell other stuff or are you just going to keep it low key?

VB: I am only interested in selling my horseshoe designs because they are like a piece of art to me I love it. I get as big a thrill out of making a sale as I did winning a race because something I created out of just an idea in my head is now decorating someone's wall in a different part of the world.

FOTH: Do you still miss riding a lot?

VB: Oh I always will.

FOTH: Is there anything better than the adrenaline rush of winning a race?

VB: Years ago I would have told you no, but I took a flying lesson and that was an incredible rush. It was amazing. It was on Sept 10, 2001.

VB: Gary forever made fun of me cause you remember the next day they had closed the skies. He said the minute I get behind the wheel of an airplane they close the skies the next day.

FOTH: I'll never forget that day. I am out of questions Vicky Anything you would like to add or say and thumbs up for letting me do this interview with you.

VB: Thanks for the interview Chris and I hope I answered your questions OK.