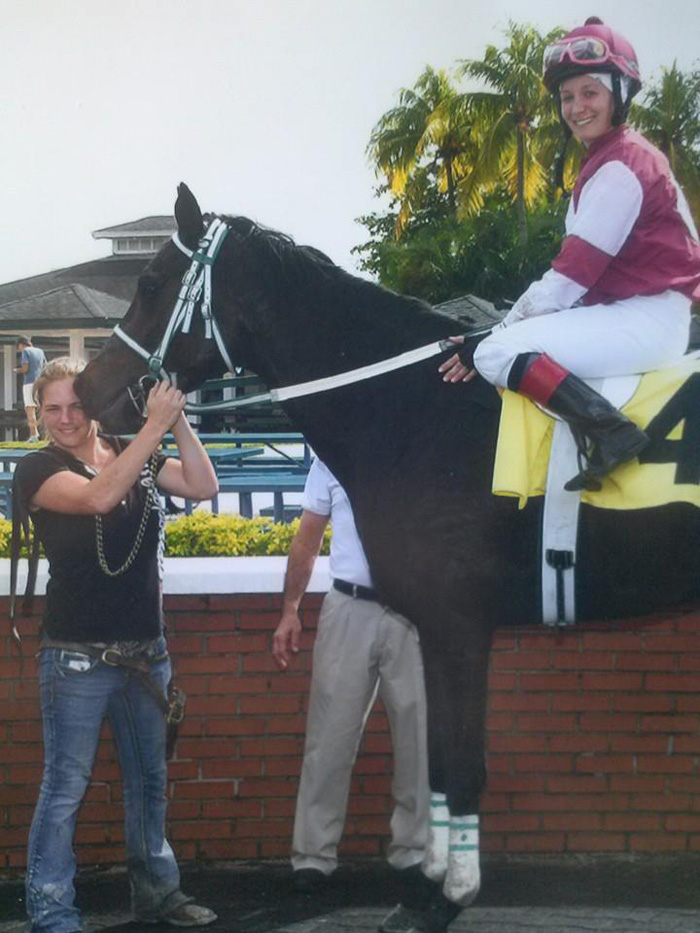 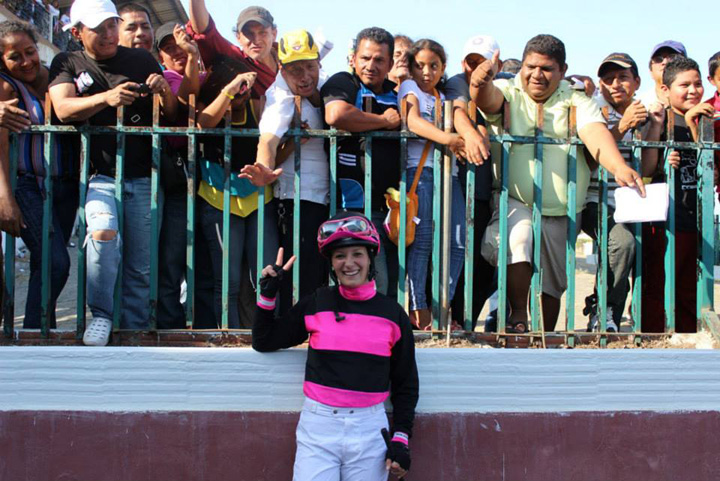 Ashley Yodice is down in Florida riding these days and she has been up to a lot since our last interview many moons ago so I thought a brand new interview was in order and here it is:

FOTH: Did you think when you 1st started riding races that in 2015 you would still be riding?

AY: I honestly didn't think that far ahead. I was so enamored with riding itself, I was just so happy to achieve that goal.

FOTH: Now I know your down in Florida these days. Do you miss NJ and riding Monmouth Park much and what are some of your favorite memories of the Jersey Shore?

AY: Do I?! Absolutely! I would love to return to New Jersey, for me it was a wonderful experience. I probably should have stayed. I had returned during the super meet. The grandstand was packed and it was exhilarating.

FOTH: Do you have a favorite horse that you have ridden and if so where is that horse at these days?

AY: Apache Prayer. I had won five races on him consecutively and three more on the board if I can recall correctly. Boston had an awesome program to rehome horses called CANTER New England. He found a home in a show barn.

FOTH: What are some of the biggest changes you have seen in horse racing since you have started to ride and do you think all tracks must have a casino to survive these days?

AY: There is a long list. One is medication. Many new rules and banning substances, that from the outside looks detrimental to a horse - but in fact are not. Most are used for humans, dogs, so why not horses? Just another counterproductive measure to flood the general horse market with horses that can't compete without bleeder medication. Then people scratch their heads and wonder why countless thoroughbreds end up at slaughter.

As to the casino: I'm not sure. I've seen it done right - such as Gulfstream - and I've seen it done wrong - like CDI and Calder Race course. So, regardless, if you have a casino it doesn't exactly ensure racing at said track. If it is managed poorly, it will fail - like any other business venture. But if managed correctly, it can flourish.

FOTH: Do you follow any other sports and if so, what are some of your favorite teams?

AY: The only sport I loosely follow is boxing. I don't have a boxer that I particularly follow but I try to watch all the big fights.

FOTH: What are some of the differences, if there any, in the way trainers/jockeys conduct their business as opposed to up here in NJ?

AY: Florida is very different. It's mostly Latino trainers and the Latino riders do well here. It is agent run with a tight group. For instance a new Venezuelan rider will come and ride for all the Venezuelan trainers. It is very difficult if you're not in the click so to speak.

AY: I actually prefer it. The horses are fresh and no threat of heat stroke, (Which is prevalent here)

I didn't have any preparation other than my face mask if the ground was partially frozen.

FOTH: Do you feel you have a certain riding style and are you still learning new things here and there as far as riding goes?

AY: Every day you learn something new. But I love speed. I'm a speed rider at heart. That is why the past two winters I rode at Hialeah - which I love.

AY: I'm married to horses. Horses will always be a part of my life. I'm not sure if I'd like to be a trainer. Although the money is there if you are successful, you have to have good owners to support you. That is few and far in between.

FOTH: I know you have done female jockey challenges in the past. How fun are they and would you like to see more tracks do something like them or other events like that?

AY: They are awesome. I actually had an interview about a month ago to be considered to go to Peru. I'm dying to go.

The problem with female challenges here is that there isn't much of a draw. However, overseas it is a big deal and crowds jam the grandstands to come see women from all over the country ride. Of course I'd like it anyway, especially if I'm invited ;)

I think it is a great way to promote women in the sport.

FOTH: So take me through what a typical day is like for you and I imagine by now you’re a morning person or do you still not like to get up early in the morning?

AY: well I have a daughter now, so my routine has changed drastically. I'd like to say I'm a morning person, but no. I'm not. Haha! I still ride part time, but I mainly exercise for Marty Wolfson here at GULFSTREAM Park. Hopefully in the future I can pursue riding quarter horses out west.

FOTH: What are some things you like to do down in Florida when you are not doing race related things?

AY: Normal everyday things that parents do. Taking my daughter Ava to the park, or movies, or taking her to grandma’s house to ride the horses.

FOTH: For someone who has never been to Gulfstream Park, tell me and them what the track is like.

AY: The track is most definitely aesthetically pleasing. The grandstand and paddock are beautiful. There are always featured events there that are family oriented. They have good restaurants that surround the paddock and shops. There is something for everybody and transforms racing into a good, wholesome family atmosphere. It is a place you can take your family for a day out.

The only qualm is have is the maintenance of the racing surface. The track is very inconsistent - I don't fine it conducive to keeping thoroughbreds sound. It drastically changes from one day to the next.

FOTH: Is being a jockey what you thought it was going to be and looking over your career has there been anything that has really surprised you about being a rider?

AY: I really didn't know what to expect when I had first started riding. The only thing that still surprises me is that there is still inequality towards women riders and that generally differs from track to track.

AY: I have always had weight issues. Especially when I was an apprentice. I used to fast, wear plastic, take LASIX, exercise daily, and sit in the box before I rode.

However, that had changed once I had my daughter. It is much easier to maintain my weight now, although I still do diet or watch what I consume. Maybe it has just become easier because I have found a routine that works for me - thanks to Tammi Piermarini.

FOTH: To your knowledge, have you ever brought in a 50-1 or more shot in your career?

AY: The second race I ever won was at 52-1 for Ronney Brown at Charlestown. There have been more, but I really can't remember.

FOTH: Tell me about these races you rode outside the US and how did you end up getting asked to do this and how did it feel being the winner of the tournament that you competed in?

AY: That for me was my favorite racing experience. I learned a lot from riding in Ecuador. Every country has different styles of riding and preparing a horse for the race. I had been asked by a trainer here in Gulfstream that had trained for an owner in Ecuador.

That was the most exhilarating experience of my life. There is no other feeling like winning a race. To win two races and an international jockey challenge on foreign soil was very rewarding. Along with the wonderful women I met along the way - the riders I rode with, the trainers I rode for, and the woman who made it all possible Maria Eugenia Lopez cañarte -- thank you.

FOTH: How much different are the race horses there were you rode as compared to US horses? How many tracks did you end up riding at and were there big crowds at these tracks?

Amante Mia, the filly I won on - was from the U.S.

FOTH: Now these horses you rode, were they the 1st time you got up on them and were you at all nervous riding so far from home? How many other riders were involved in this and were you the only US rider and was this male and female riders or just female riders?

AY: I was lucky enough to work a horse 800 meters the day before to feel the racetrack. I was able to hop on Locatelli, which have me a pretty good feel of him. I was instantly confident that he was in the right frame of mind and would be a tough competitor.

I think I was too dehydrated to be nervous. I had pulled seven pounds on the plane to Ecuador by lasix. The weights were very light - typical apprentice weight in the U.S. So it was difficult for me. Also, I had just had my daughter 6 months prior and I was at about 165 maternity weight at that time. Weight was especially hard to cut after pregnancy - so I didn't have much of an option. I tacked 108, which was a pound lighter than I had tacked my whole apprenticeship. I was literally the equivalent of a zombie.

There were only female riders. One from chile - Anita, Ana from Peru, Majo represented Ecuador (their first female jockey) Jacqueline from Brazil and Florencia of Argentina.

FOTH: Would you like to see perhaps some US tracks try events like the one you did and has that been the only time you have rode outside the US and what are some memories you will never forget from the event besides winning it of course?

Yes, I just hope it isn't the last time!

I don't think there is anything I could forget about such a memorable experience. We traveled a bit in Ecuador which was awesome. We went to montañita. The whole experience was fantastic.

What I will never forget are the friends that I've made when I was there. I miss you all and hope to see you again.

FOTH: I asked you this before, but I’ll ask again, if some young girl is thinking about becoming a jockey, what piece of advice would you give her?

AY: If she wants to do it, go for it. Just have a plan B. This sport takes a toll or your body, and you can't ride forever.

FOTH: How much longer do you think you will ride for or right now you’re just kind of taking things day by day?

AY: I definitely am taking things as they come right now. I just separated from the father of my daughter and my world is upside down. I'm just trying to figure things out, dust off, and get back on my feet. You can expect a full time comeback. ;)

FOTH: Ashley thanks for dong this 2nd interview. I am out of questions and thumbs up for doing this and any last words to close this interview?

AY: Thanks for the love FOOTBOY LOL!