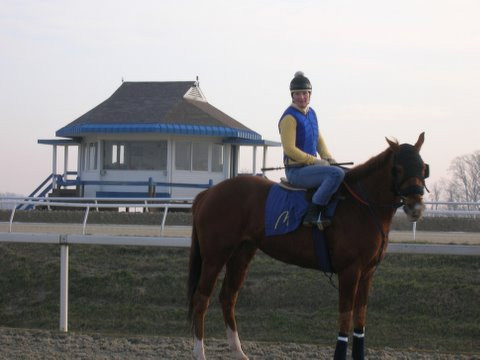 Michelle Penman is an amateur jockey that I was lucky enough to meet when she came up to ride at Phila Park a few months back. I got her on the phone and this is her story.

MP: I was born in Glasgow, Scotland and that is where I grew up.

FOTH: How long did you live in Scotland before you came to the US?

MP: I was in Scotland until I was 20 and I came over shortly after my 20th birthday and I have been over here ever since and I just turned 26.

FOTH: Was there any particular reason why you came to the US to live?

MP: Horses of course! Plus if you ask anybody who lives or has been over there what the weather is like, they'll say it rains constantly! For me, it was kinda getting old, galloping in the rain everyday, as well as grooming and mucking out stalls- I was like a walking wet muck sack. I really wanted a change and I was reading The Racing Post, which is like the Daily Racing Form, and Michael Dickinson had advertised for some exercise riders so I called him up and I have been here ever since.

FOTH: Speaking of Scotland, is there a lot of race tracks over there?

MP: There are a few flat tracks and a there are a couple steeplechase tracks as well. Its only turf racing in Scotland but they have a three all weather poly racetracks in England.

FOTH: Your not an actual jockey, but your part of the Amateur Jockeys club and I know you rode at Phila Park. Tell me a little about that and how you came to join this, etc.

MP: It is something I have always wanted to do. I grew up riding my ponies at shows all over the UK. I finished high school and then applied to do physical therapy at university and when I applied they advised me to take a year out. Apparently the drop out rate for younger students taking this class was very high, so they suggested I travel Europe or something like that! On weekends, I had been helping my mum at the stud farm where she worked and had been sitting on the yearlings for fun so I decided that my year out was going to be spent learning to ride racehorses 'for real'. I attended the British Racing School in Newmarket and learned to gallop racehorses there and I never looked back. I then went on to work for now champion trainer in Scotland, Ian Semple (he had a runner in the champagne G1 at Belmont this week!). I worked there for 18 months and then came over here to work for Michael Dickinson, which I did for 4 years, which I think is a record for anybody (laughs) and since then I have been an assistant trainer/exercise rider for Michael Mc Carthy at Fairhill, MD for the last 2 years.

FOTH: Tell us what is the actual difference between an amateur jockey and an actual thoroughbred jockey.

MP: The main difference is the weight. The lowest I have seen in an amateur race was 125 (at Philadelphia this weekend!) and It can go anywhere into the 140s whereas in a professional race you won't go really see the weights go over 126 or something like that. We don't get paid for what we do, we simply do it for fun. The format of the club now is by draw, which means they put all the horses' names in a hat and all the riders' names in a hat and randomly match them up, which works good for some people and sucks for others. Unlike the Europeans, we don't it very often, we average like one race a month!

FOTH: How many races have you been in so far?

MP: I have been in the club since Oct of 05 and I have ridden in 6 races so far and also some point to point races as well. I would have started riding in theses races when I was working for Dickinson but got sidetracked for a while because I had bad accident and broke my back. But now I am back, I feel great and I want to ride (and win!) as many races as I can. It is soooo addictive!

FOTH: What tracks have you rode at besides the race at Phila Park.

MP: I have rode at Charlestown, which is where my 1st race was, Laurel, Pimlico and Phila.

FOTH: What was your favorite track you have rode at so far?

FOTH: You just liked riding at Phila Park cause you met me while you were there.

FOTH: So how did you take to the smaller track like Charlestown?

MP: Yeah it was a little different and when i took a look at it, it reminded of the training track at Delaware but I didn't have any problems riding there. I had the # 1 post so I just hugged the rail the whole time and got lucky.

FOTH: Have you won any of these races yet?

MP: Nope not yet, but I am hoping too really soon- I am so hungry for it!

FOTH: These 6 races you rode, is it pretty much the same girls or at the different tracks there is different girl riders?

MP: Pretty much. The New Jersey tracks have plenty of amateurs exercising there so they use their own riders. However, if they can't get enough riders they will call Philadelphia and Delaware. The guy who runs the amateur club will try to put people at racetracks they are used to and that are local. So I would ride at say Laurel, Pimlico, Delaware Park and Phila Park cause they are the closest tracks to me. Like somebody from NJ would probably ride the NJ tracks and maybe Phila Park. It just depends on your location and there is quite a lot of us in the club now and some years ago they would have to go around to the barns and beg people to ride to fill the races. The club has gotten a lot stronger in the past couple years.

FOTH: Do you think there will ever come a time when a woman rider gets treated with equal footing as a male jockey?

MP: I'd like to, but in reality I don't think so because women are so outnumbered, even now. There is a lot more girls riding now compared to say 20 or 30 years ago and there seems to be more and more "bug" girls riding. Sadly it seems after they lose their "bug" they really don't really get the same respect. I'd love to see it happening, but I really don't think so.

MP: The 1st thing I would tell her is make sure she has a good foundation. In other words, she must know how to gallop and work a horse competently before even thinking about becoming a full time jockey. She should hook up with a well established trainer with lots of horses for her to learn on. She should be willing to do whatever it takes, without putting herself or anyone else in danger. She should be able to take criticism as well as an occasional good bollocking! She should also get as much advice as she can from other jockeys, male and female about fitness, nutrition and riding techniques. She should watch lots and lots of races live at the track and on TV, evaluating the jockeys and horses. Basically, she has to be a sponge, soaking up as much info as she can before taking the big step!

FOTH: For those who don't know, tell us what exactly you do as an exercise rider.

MP: Well I act as assistant trainer as well so I have a bit more responsibility. Firstly, we only train the horses five days a week and I generally go to the barn at 5:30 am. I have 6 horses for Mike at Fairhill and I'll get on my 1st horse at 6:00 am. I may take my horses to the track or go out on a trail ride. We have great facilities at Fairhill- so the horses can train out back on these huge hills and they don't even realize they are getting a workout, they think they are on a leisurely stroll through the countryside! We see so much wildlife out there too, it is fascinating. After I have finished training the horses, I clean my tack, set the feed, give medications if required and head on home! I have a really laid back job!

FOTH: With you being an exercise rider and amateur jockey can you watch a race and tell if the jockey made a mistake in a race or not.

MP: Definitely. I think it is easier to judge from the sidelines than in an actual race. Everything goes lightning fast in a race. I have seen a lot of good jockeys make silly mistakes. We are only human!

FOTH: Without naming names have you had any male jockeys give you a bunch of bull when you tell them they gave a horse a bad ride and they just say your just a woman what do you know?

MP: No. I think I'm pretty well respected and because I worked for Michael Dickinson for 4 years, people know it takes a certain kind of person to do that. I have breezed a lot of good horses for him and I was nearly always the pace maker. Michael would have jockeys like Ramon Dominguez, Harry Vega, Mario Pino and Michael Mc Carthy come out to the farm and they would sometimes ask my opinion about the horses, what is the best way to ride them, do they have any quirks etc. Out of respect for what they do, If I thought they were doing something wrong I would keep my thoughts to myself and learn from their mistakes!

MP: I love my job and I love what I am doing but the opportunities aren't just the same at home such as the working conditions. If I was gonna go anywhere different I would like to visit either Germany or Australia. In Germany the amateur races are almost as popular as the regular professional races. They ride much more often whereas we only get maybe one race a month so when the European girls come over here they are so much fitter than us and you can tell they ride regularly- it is second nature to them and they are so cool. I like where I am and I am happy with what I am doing. Of course I miss my family, but that is all I miss about home.

FOTH: So you don't plan on branching out and maybe becoming an actual trainer.

MP: I have noticed trainers have a certain kinda craziness in their characters which I don't have (I hope!). Plus I am way too organized, all the trainers I have worked for are all scatterbrains! In reality though, I am not really one for change. It depends on my boss too, if he gets more horses, I could possibly run a whole barn myself.

FOTH: I am out of questions anything you want to say to wrap this up?

MP: No just thanks for the interview and I hope we meet again.